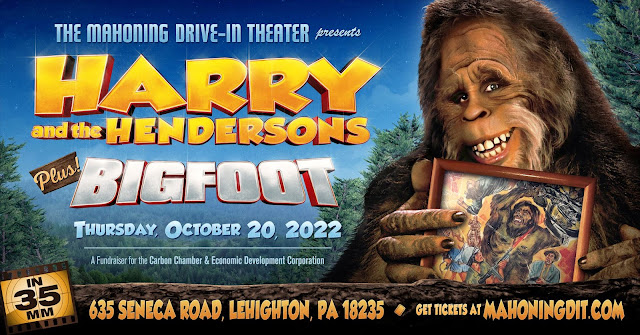 Harry And The Hendersons / Bigfoot
Mahoning Drive-In Theater - Lehighton, PA
It's not often that they have a Thursday night show at the Mahoning Drive-In Theater.  This event was a fundraiser that was held in partnership with the Carbon County Chamber of Commerce.  It was themed around two classic Sasquatch films: a family friendly film from the 80's, and a low-budget grindhouse flick from the 70's. 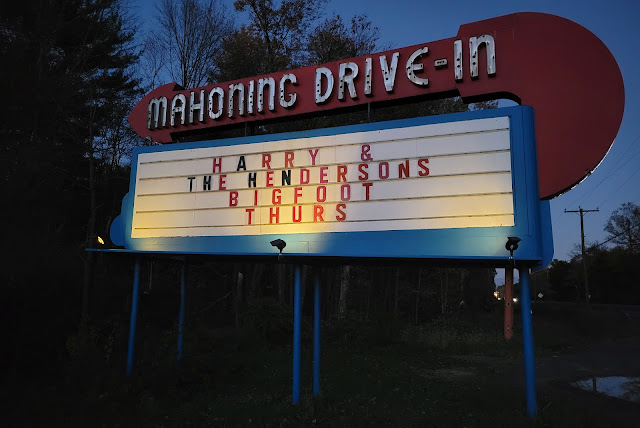 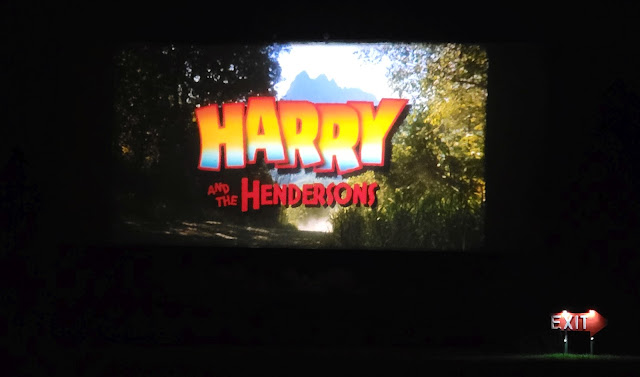 The first movie of the night was the 1987 family comedy, Harry And The Hendersons.  This is a movie that I saw for the first time when 8 or 9 years old when it aired during a free preview weekends on one of the premium channels.  When I was a kid, my grandfather would go through the tv guide from the newspaper at the start of the week to look for movies that he thought I might like.  If he found one, he'd set the timer on the VCR to record it so that it would be ready when I came to visit on the weekend.  If it was a movie that I liked a lot, he'd keep it and record something else after it until he filled all six hours on a VHS tape (Grandpa didn't mess around with anything except SLP speed), so I ended up with a collection of movies recorded off of television from the mid to late 80's that I watched repeatedly.  If I'm remembering correctly, he recorded Harry And The Hendersons on a tape with Flight Of The Navigator and Darby O'Gill And The Little People.
Harry And The Hendersons is a fun movie that stars John Lithgow as a middle-aged man who accidentally hits a bigfoot with his station wagon while he and his family are driving home from a weekend camping trip.  Believing that he is dead, they strap him to the roof of the car to bring him home, but he's not dead and havoc ensues. 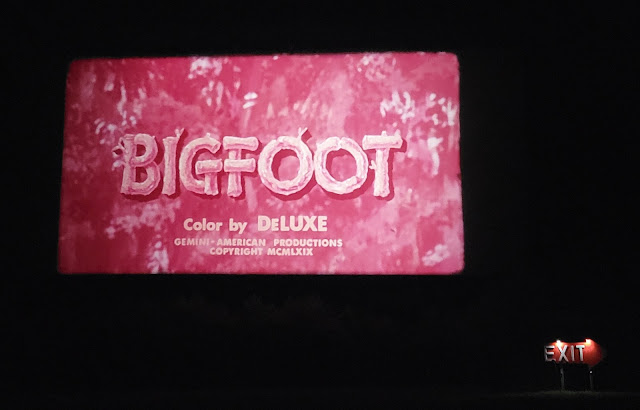 The second movie of the Thursday night double feature was the low-budget 1970 film, Bigfoot.  From its description, I was expecting a movie that was far less family-friendly than the first film of the night, but it wasn't nearly as "adult" as I thought it was going to be.
Bigfoot is about a Sasquatch family who kidnap several young women, all but one of whom are dating members of a biker gang.  I'm using the term "gang" in the loosest sense, because none of these guys come across on the screen as violent - they're just guys who like to ride their bikes.  The police don't take the kidnapping seriously, so it's up to the biker gang and a couple of grifters (one of whom wants to capture the beast) to rescue the girls.
I hadn't watched this movie before last night, but I was expecting something very different than what this is.  When I read the description, it included biker gangs, kidnapped girls in the woods and bigfoot.  My first thought was that this was going to be a cheesecake sexploitation flick where the girls end up topless before the second reel, but that's not what kind of movie this is.  There's no nudity, and the women aren't assaulted or anything like that.  The only time it even comes close is a scene in which Joi Lansing is tied to a tree with the father of the sasquatch family approaches her.  She does one hell of a lot of screaming, but she makes her escape before the beast gets too close.  Additionally, the violence in this movie is pretty tame and not really anything worse than you'll see on Harry And The Hendersons, and although I didn't count the profanity, I'm pretty sure that there are more swear words in the 1987 family film than there are in Bigfoot.  I don't really care one way or the other when it comes to sex and violence in movies.  I'm not offended by it in the slightest, but I'm also long past the age of getting super excited about topless scenes and hearing the F-word.  I'm just surprised by the fact that a strong argument could be made that this 70's grindhouse film may have less "adult" content than the 80's family film that it was paired with.
Bigfoot is definitely cheesy and not the kind of movie I'd describe to anybody as a must-see, but it's worth watching if for no other reason than to experience the kind of movie that played in small theaters and drive-ins across the country during the early 70's.  You can stream it for free on Plex. 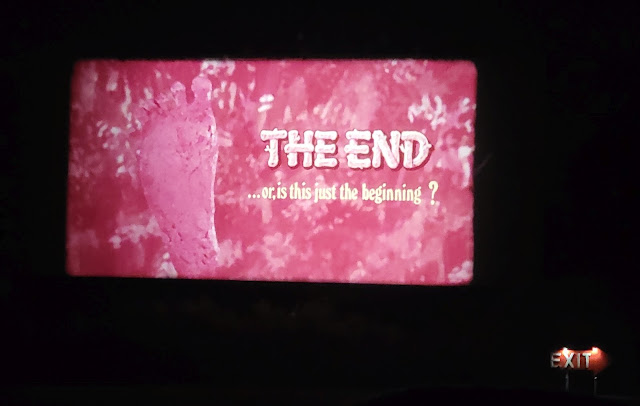