Buddy, Can You Spare A Bagel? 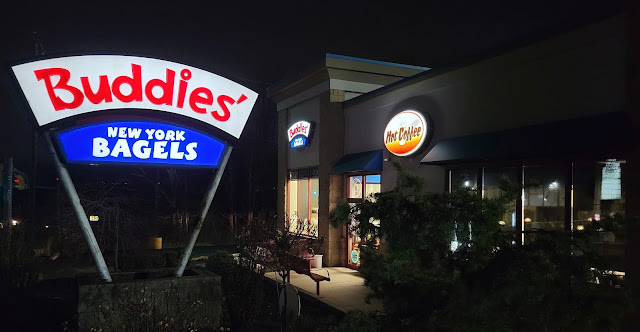 Buddies New York Bagels
Route 93 - West Hazleton, PA
I've driven past this bagel shop next to Pizza Hut in my hometown at least a thousand times without ever stopping in.  The biggest reason is because it's kind of a pain in the ass to get there when they're open.  The restaurant is tucked away in a little area that's only accessible if you're headed northbound on Route 93 through Hazleton, which is not a road that I've had to take very often in my commute to school or work too often.  Since there are plenty of similar places that were much more convenient, going out of my way to stop here wasn't really even a consideration.  I would probably have stopped sometime after work, but Buddies Bagels closes at around 4:00 pm, so that wasn't going to happen either.
Neither of these are insurmountable obstacles, but the real reason I never went out of my way to stop here is that I'm really not much of a connoisseur of breads and bagels.  It's not that I dislike them, but I can't really tell the difference between the high quality expensive breads and the cheap ones.  When I was 20 years old, I spent a weekend in New York City with the girl I was dating at the time and some of our friends.  Everyone in our group insisted that we have to get a bagel at some little shop whose name I have long since forgotten.  They said it was the place where David Letterman got his bagels, and that I haven't really had a bagel until I've had one from this place.  So we went, and I had a bagel, and it was pretty good.  I went along with their ravings about how wonderful it was out of politeness, but if I'm being perfectly honest, I didn't think that the bagel I had there was too much different from the ones I get at the grocery store.  That's kind of the way I feel about bread in general.  Sure, some are softer and more flavorful than others, but my perception of the taste difference between the most expensive artisan bread I've ever eaten and a slice of plain old grocery store bread is pretty insignificant.  It's the same way I feel about Coke vs. Pepsi or Sprite vs. Sierra Mist.  I'll take whatever you got and be happy with it.

Still, this bagel shop must be doing something right to be able to stay in business in that location for as long as they have.  Plenty of other places that have occupied that same spot have come and gone over the years, including a restaurant called El Pancho Villa Steak House.  This was a place that my dad worked in the summer of 1978 when he was home from college.  He told me that they had a line going out of the front door of customers who came to get their fried chicken, but the place was dead after about a year and it went out of business before I was born.  There have been at least two or three other restaurants in that spot since I've been alive, and none of them seemed to be able to stick around for very long.
Buddies' Bagels opened in 2004 and are in their 18th year of operation, even surviving the pandemic which put quite a few other places out of business.  I suppose it helps that they're right near the entrance of an industrial park, and their business model is more geared towards a grab-and-go crowd than as a sit-down restaurant, but however you slice it, it's pretty impressive to see that they're still going strong in this spot after all these years.  I decided it was long past time that I give this place a shot, so I took a different way to work than I normally take this past Tuesday and stopped in. 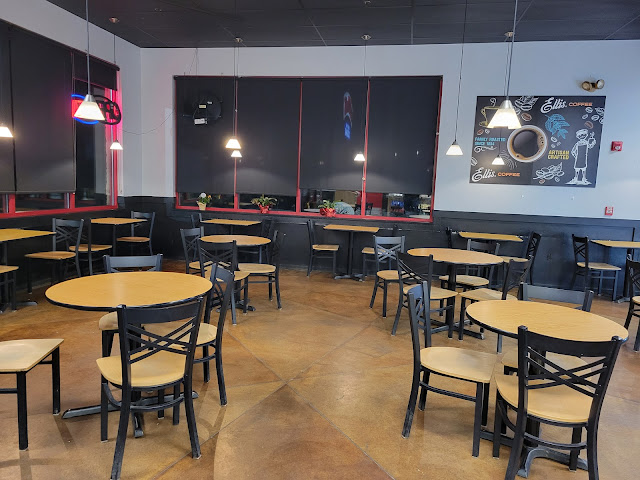 The first thing I noticed is that it's a lot bigger on the inside than I thought.  I didn't expect that it would have had seating at all, let alone this many tables. 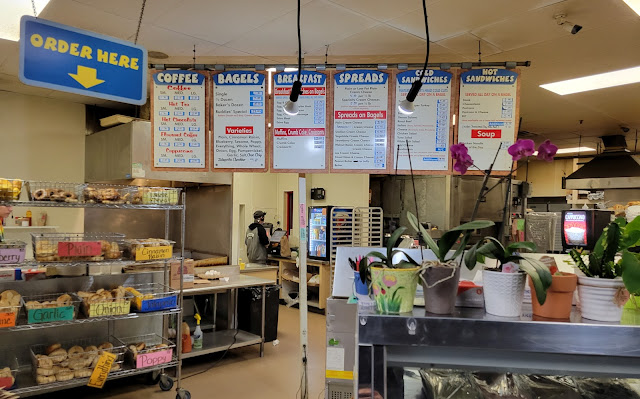 The second thing I noticed is that they had a lot more on their menu than just bagels and coffee.  I figured they might have a couple of breakfast sandwiches, but you could get all kinds of different sandwiches, including a cheesesteak and a pastrami and cheese sandwich on a bagel.  I'm going to have to stop by to try those one of these days.
The third thing I noticed was the prices, and I'll ask that you bear with me because there's a little bit of a backstory to this. 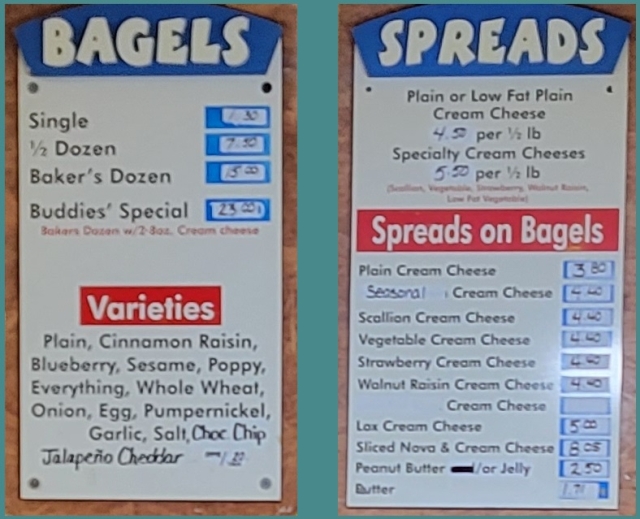 My grandparents stopped here one time when it first opened back in 2004.  My grandmother told me all about it in a story that concluded with the phrase "bullshit on them", which was her way of giving a place of business the old thumbs down.  Her negative opinion of Buddies' Bagels was solely based on the fact that they charged extra to put butter on your bagel.  I can almost hear her voice in my head as I write this: "Cream cheese, I can understand, but BUTTER?  No... bullshit on them!"  However you read that last sentence in your mind, double the volume for the whole thing, but triple it for the word "butter" and you'd be getting closer to how this sounded.  I can sort of see her point.  At just about every restaurant I can think of, butter is a free condiment.  If you get buttered toast in a diner, they don't charge you for the butter.  Hell, even McDonalds throws in the packets of butter with their Big Breakfast.  Charging for butter sort of comes across like charging you extra to put cream in your coffee.  Now, my view on this is that if I wasn't willing to pay extra for butter, I just wouldn't order my bagel with butter, but my grandmother was a very hard-headed and spiteful person.  Once she declared "bullshit on them", it stuck.  It wouldn't matter to her if they stopped charging for butter, or if they sold the whole dang restaurant to a new owner who gave away free sticks of butter for the grand reopening.  Once something found its way to her shit list, it stayed there for good.
I was a little taken back as well when I saw the prices on the menu boards.  At first, I thought it was saying that a plain bagel cost $1.30, and the prices listed under "Spreads On Bagels" were an additional upcharge tacked onto that (as in $1.30 for a bagel + an extra $3.80 for plain cream cheese, for a total of $5.10).  Now that I'm looking at it with fresh eyes (not at 6:30 am on a Tuesday), I believe it's saying that the $3.80 charge is for the bagel with a spread of cream cheese.  It's still not what I would call a bargain compared to a place like Dunkin Donuts, but it's not as outragous as I first thought.
I didn't ask about the bagel and spread prices while I was there because I was hungry for a breakfast sandwich. 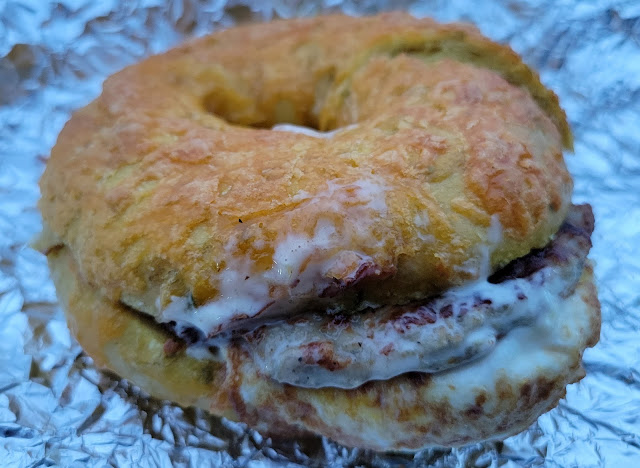 This is a sausage, egg and cheese sandwich on a toasted jalapeno cheddar bagel.  The photo isn't really doing it justice, because this was a thick and delicious sandwich.  They even cut it in half and wrapped it up in foil so it was still nice and hot by the time I got to work, which is over a half an hour drive from the restaurant.
I may not be able to tell much of a difference between a fresh bagel and one from the grocery store, but I can sure as hell appreciate a good breakfast sandwich when I have one, and this was a damn good breakfast sandwich.  I'm more than a little curious to know what their bagel cheesesteak is like.  It's $8.50, which is only a few cents less than a full cheesesteak on a roll at Citizens Bank Park.  I'd be willing to give it a shot one of these days, but it would have to be something pretty special to justify that price tag.  I may not be quite as vicious of a critic as my grandmother was, but I'm not Rockefeller either. 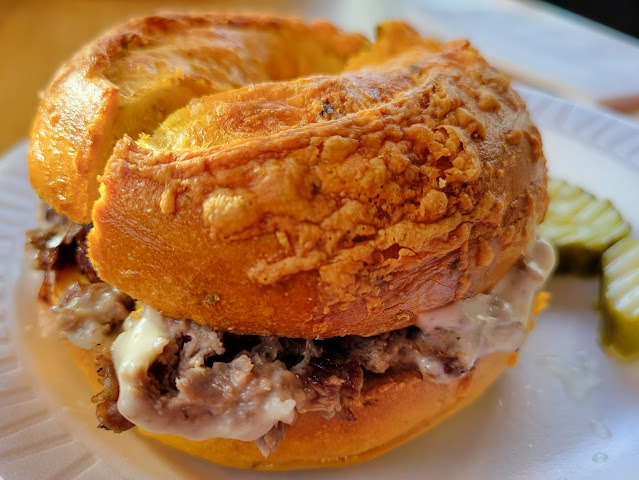