This Is What Happens When You Don't Recycle Your Pizza Boxes 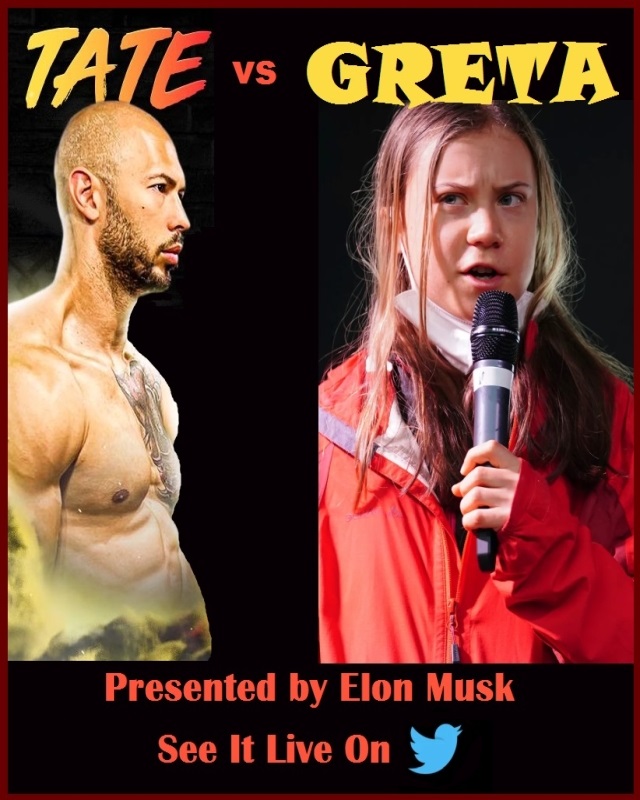 As a general rule, I avoid writing about things that could be considered political, but this story is just too good to pass up.  It all started three days ago when a 36 year old retired kickboxer named Andrew Tate wanted to brag about his car to a 19 year old Swedish girl.
Tate had an unremarkable career in combat sports and is perhaps best known for making homophobic and misogynistic comments on social media.  This behavior led to him being banned on most platforms, but since Elon Musk has recently reinstated many accounts that had previously been banned, Tate has been able to tweet once again.  He decided to use his newfound Twitter freedom to randomly taunt environmental activist Greta Thunberg... you know... because he's such a cool guy. 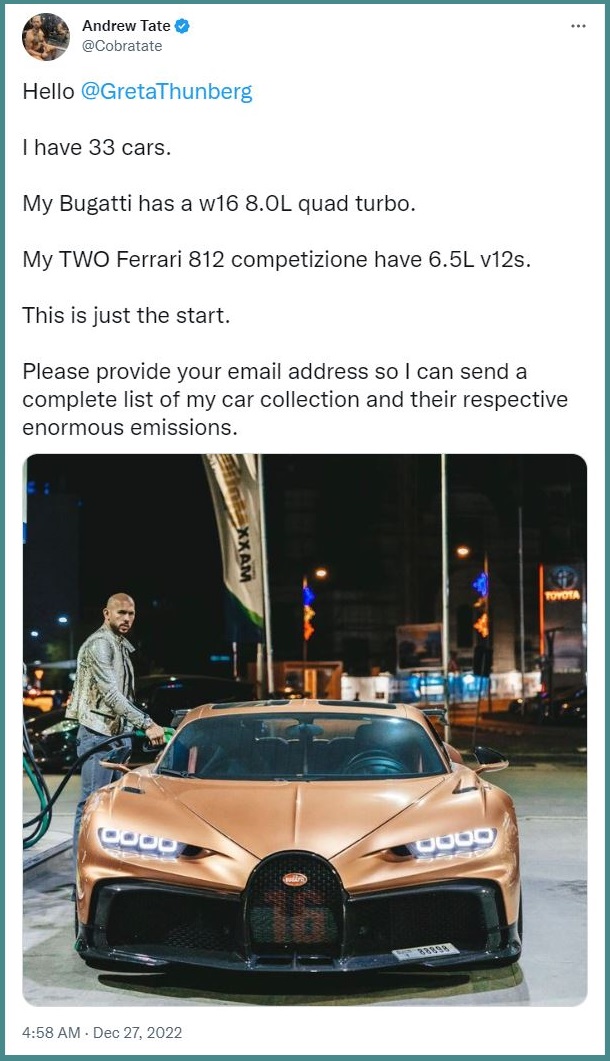 Ms. Thunberg tweeted out a response the next morning, which promptly made millions of people laugh their asses off.  That's no exaggeration.  It is now less than 48 hours after she published it and it has over 3.4 million likes.  It is currently the sixth most-liked post in the history of Twitter, just a few hundred thousand away from President Barack Obama eulogizing the late Kobe Bryant. 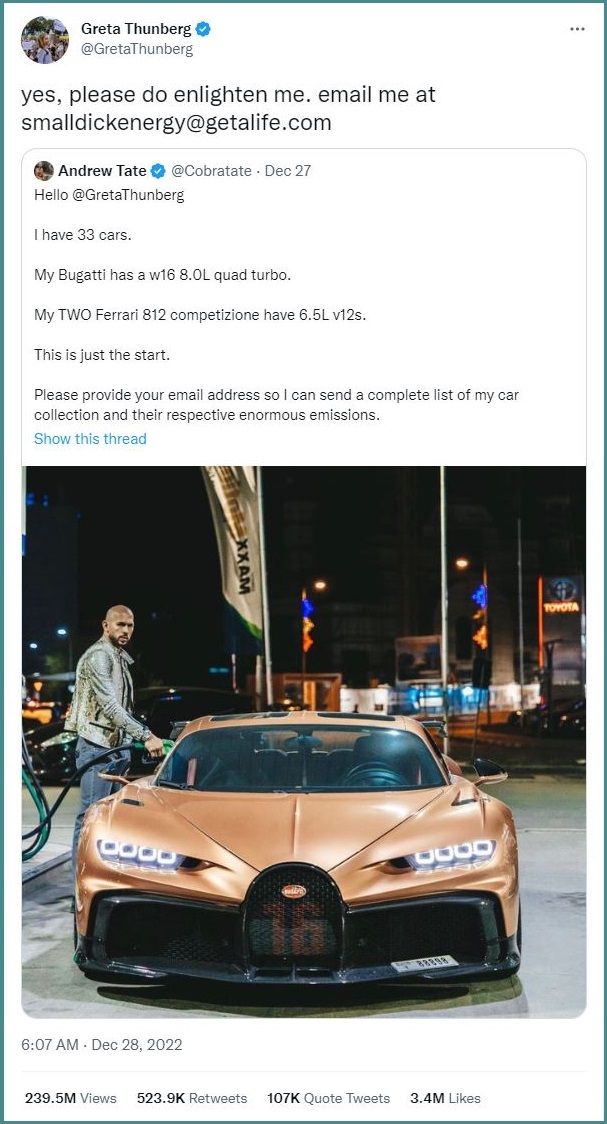 Once we all caught our breath from laughing at the fact that this big tough guy got his ass handed to him by a teenage girl as practically an afterthought, we took a moment to appreciate the fact that Andrew Tate wasn't satisfied to just take the loss and move on with his life.  He had to go out of his way to humiliate himself even further with this ridiculous response. 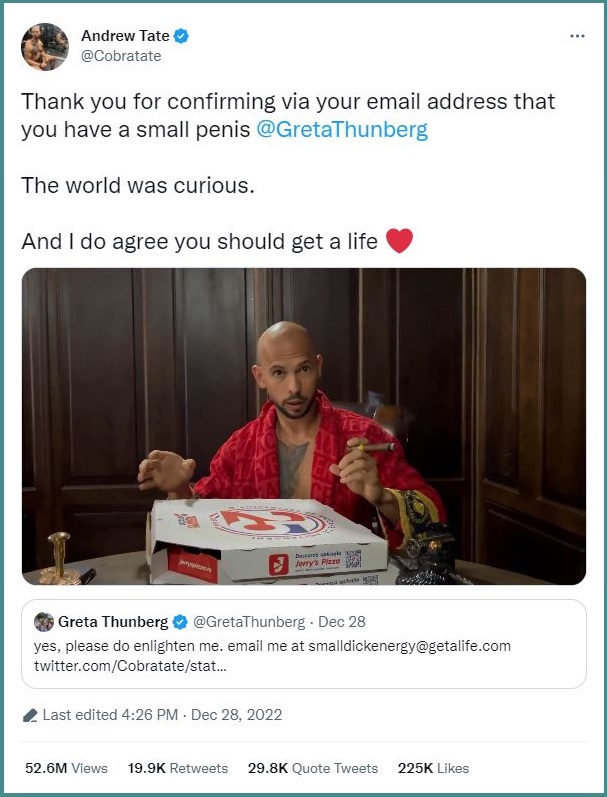 There's a video with this tweet, but it's even more asinine than what he wrote.  It's basically just him smoking a cigar and talking about how he's in trapped in the matrix and doesn't like to pay his taxes and some other rambling nonsense.  The only reason the video is relevant at all is because of the pizza boxes from Jerry's Pizza that are sitting on the table in front of him. 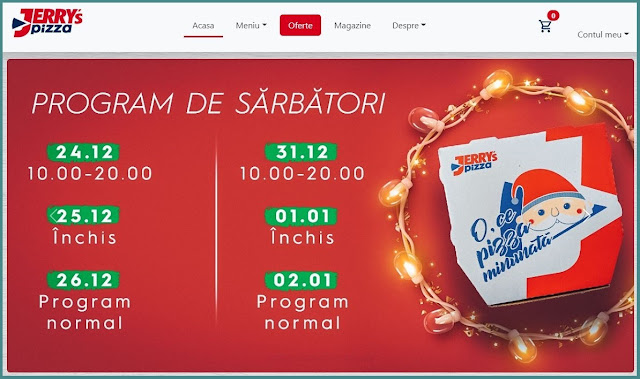 Jerry's Pizza is a chain restaurant that is found only in Romania.  I've never been there before, but I'm sure it's a lovely country with a thriving pizza scene, and there's no reason why anyone should't be proud to post a video which shows that they're enjoying a slice in the country that gave us Count Dracula.  Well... it might not be such a great idea if the Romanian police suspect you of human trafficking, rape and organized crime and they've been working to establish your whereabouts, but surely that isn't a problem for Andrew Tate, right? 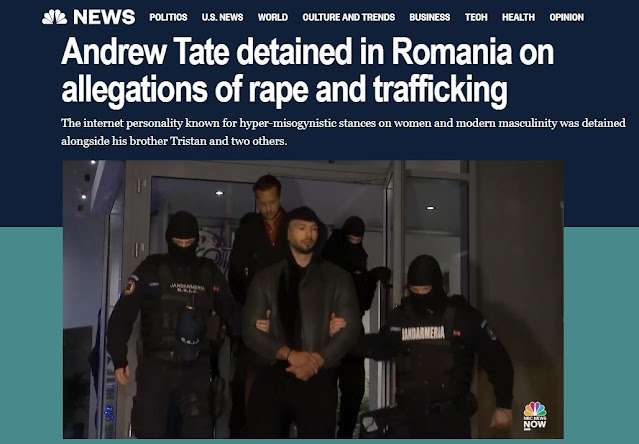 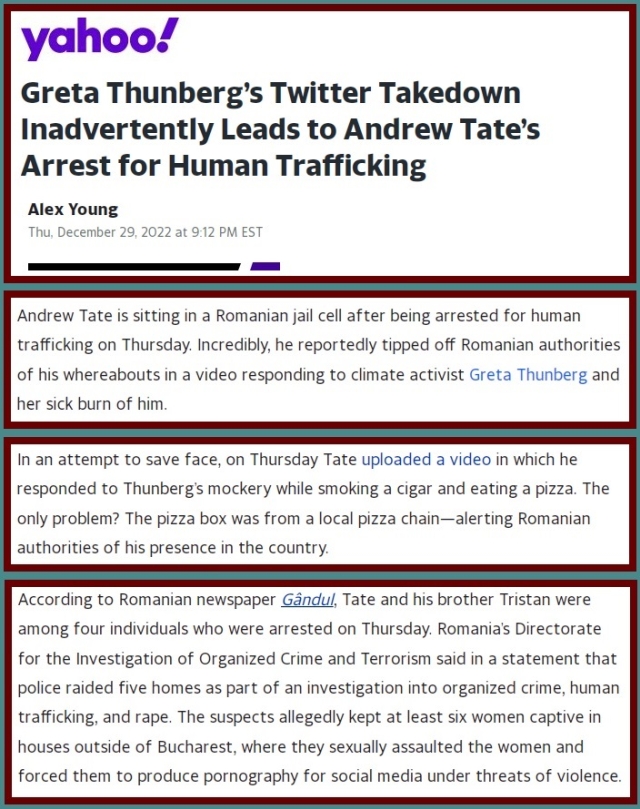 Whoops!
Those 33 cars are going to come in handy when you're looking for things to sell to pay off your lawyers, court costs, fines, and civil lawsuits that your victims are going to file against you.  I'm thinking you're also going to be enjoying an extended stay in a Romanian prison.  If you're lucky, maybe they'll have you booked in before dinner time.  I hear that it's pizza night.
Before you think that this is where the story ends, Ms. Thunburg checked in with everyone to share some environmental words of wisdom... just to put a cherry on this ice cream sundae.