The Real Horror Was Off Screen 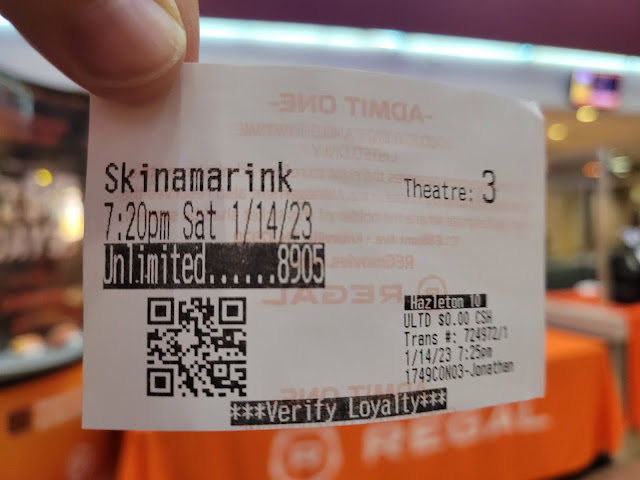 Skinamarink
Regal Cinema - Hazleton, PA
We've watched at least a hundred movies here since we first signed up for the Regal Unlimited plan three and a half years ago.  It's a pretty good deal because there's no risk in taking a chance on something that you've never heard of before.  The price is the same whether you go or not, so we go to see pretty much everything.  We have never walked out on a movie that we saw as a part of the Unlimited deal, but there's a first time for everything. 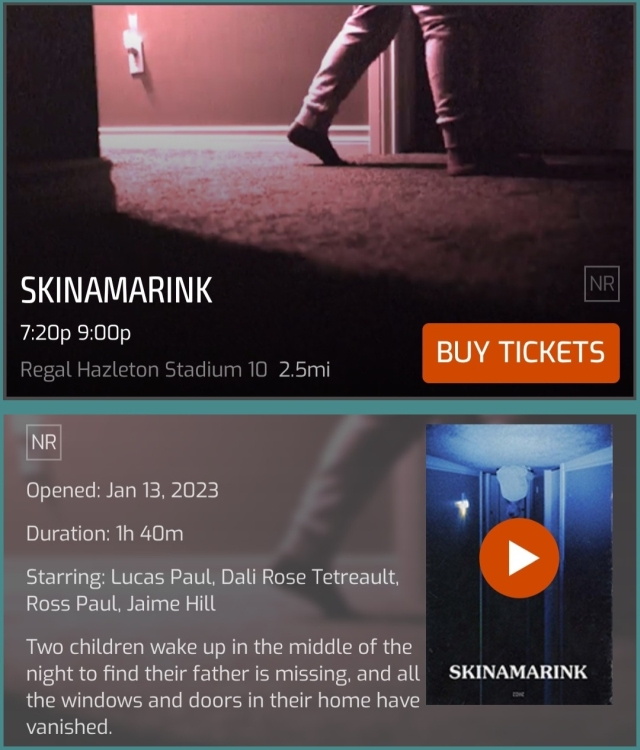 The description for Skinamarink looked pretty interesting on the Regal app.  There was a link to the trailer too, but I usually try to avoid those because they give away too much about the plot.  That wouldn't have been too much of a problem in this case because there was nothing here to spoil.
I would say that this was one of the worst movies I've ever seen in a theater, but that would be giving it too much credit because it really didn't feel like a movie at all.  It was more like a bad art school project on Tiktok.  Every shot about about 10 to 20 seconds long, and it looked like it was being filmed on a cell phone with a VHS tape filter.  It looked as if they had the phone that filmed this thing sitting on the floor and tilted to look up at the corner of the room where the wall meets the ceiling.  The first 20 minutes of the movie was just shot after shot of different rooms in a house with most of the lights turned off, and a tiny bit of dialogue of a guy on the phone talking about how his kid fell down the stairs.  It wasn't scary, or spooky, or atmospheric.  It was just a cheap gimmick that kept going on and on without ever transitioning into an actual movie.
After about twenty minutes of this nonsense, my wife and I looked at each other.  I don't remember if she asked me if I wanted to leave or if I asked her, but we both agreed that we've had more than enough.  I'm not exaggerating when I say that I've been less bored sitting in the waiting room at the dentists office where I could at least read the magazines.  I'm sure that this kind of artsy fartsy stuff appeals to some folks, but I'm not one of them.  If you like movies with a plot, I would recommend going to see literally anything else. 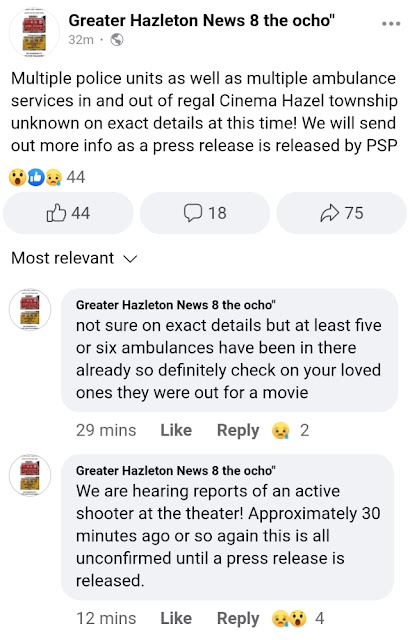 We stopped at Applebee's for dinner on the way home and overheard people talking about a shooting that had just happened at the Regal Cinema... the place we had literally just come about five minutes earlier.  I'm not sure where in the theater it happened or if anyone was killed, but it's a hell of a lot scarier than anything I saw on the screen last night.  Is it possible that walking out early on Skinamarink could have saved our lives?  Maybe.  Maybe not.  Either way, that's too close for comfort.
UPDATE [1/15/2023]: The shooting took place in the arcade that's off to the left hand side in the lobby, and the victim was pronounced dead at the hospital the next day.  It's a crazy world that we're living in.