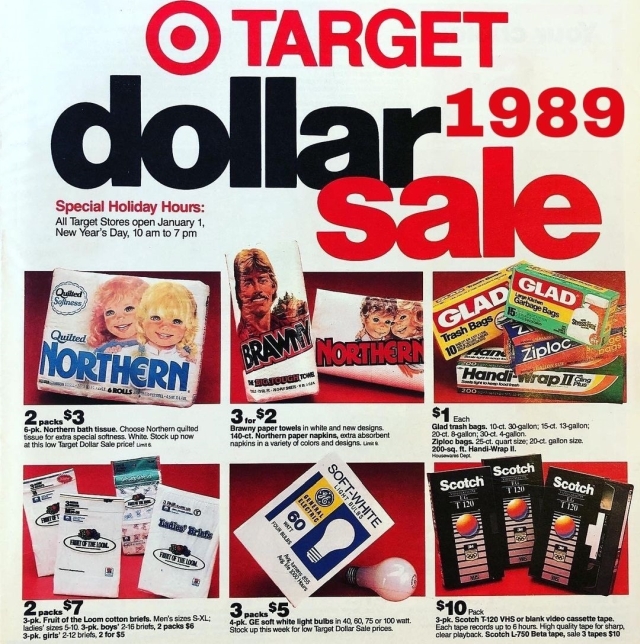 Target Circular
January 1989
This circular for a sale that Target had during the first week of 1989 was shared on Instagram a few months ago.  As we enter 2023 with inflation that is absolutely out of control, it's interesting to me to look back and see the prices for some of the things that we only see today at flea markets or on eBay when they were brand new.

The ad on the left is the one that prompted me to write about this circular in the first place.  There was a company called New Age Video that released movies, cartoons and television shows that had entered the public domain on a series of affordably-priced VHS tapes.  That's not too unusual.  To this day, you can find DVDs at the dollar store of public domain works.  The thing that made these New Age Video tapes unique was the fact that each tape had a bag of microwave popcorn included in the box.  I had a Tobar The 8th Man tape from this series when I was a kid and it blew my mind.
Next is the 3 for $10 deal on Commodore and IBM PC software.  There are a few computer games in the ad, including Bump Set Spike Doubles Volleyball, Speed King, and Richard Petty's Talladega.  These were originally released from 1984 to 1986, so they were a bit antiquated by the time this ad was published.
On the far left is a three pack of blank Scotch VHS tapes.  You couldn't give these things away at flea markets and thrift stores over the past 20 years, but they're starting to become collectible among certain circles.  Give it time... maybe there will come a time when blank sealed VHS tapes sell for the ridiculous amount of money that we're seeing sealed vintage video games going for today.

Speaking of video game related memorabilia, this Target flyer advertised a sale on a video game organizer that could be used for an NES, Sega Master System or Atari 2600 console.  There was also a Nintendo cartridge carrying case being sold for five bucks, and Sega Master System games for $39.  I only had a few 8-bit Sega games when I was a kid, but I actually had three out of the five games in this picture: Alien Syndrome, Monopoly, and Spy vs Spy.  Even though the ad refers all of these as cartridges, the Spy vs Spy game was actually made on the Sega Card.

Here are some other pieces of technology that are vintage today, but were in common use when this circular was published.  I made plenty of mixtapes on cassette, and took even more photos on 110 film when I was a kid, but I never had a computer that took 5¼ floppy disks.  Even the Tandy that my maternal grandmother had in her office in the late 80's had a 3.5" floppy drive.

Last, but not least, are a few of the edible goodies from this flyer.  Sunkist Fun Fruits and Hi-C juice boxes were a massive part of my childhood.  My grandparents used to get them for me when they'd go grocery shopping, and I'd snack on them while watching Saturday morning cartoons when I stayed at their house on the weekend.  We'd also have microwave popcorn for watching movies or television in the evening.  I don't remember ever having cheddar cheese or sour cream & onion flavored popcorn, but I do remember that my grandmother used to pour the popped popcorn into a dark brown plastic water pitcher with a thick handle on the side.  Man... I haven't thought about that thing in over 30 years.  Memory is a funny thing.  Something as minor as the thing my grandmother used to hold popcorn encoded itself in the back of my brain, and then it just randomly comes to the surface, like an old computer file accidentally being moved to the desktop.