Pleasure's Real, Or Is It Fantasy 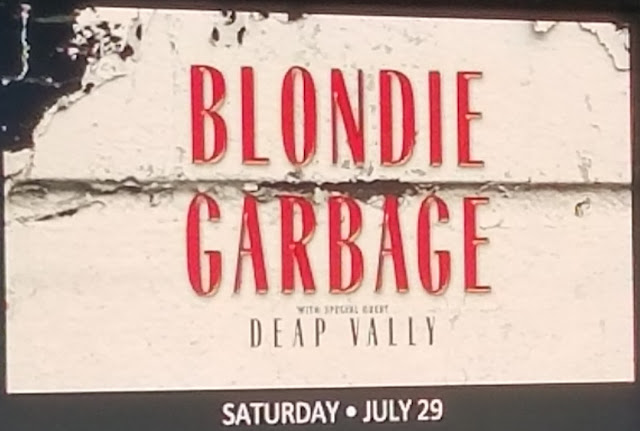 Deap Vally - Garbage - Blondie
The Rage & Rapture Tour
Bethel Woods Center For The Arts - Bethel, NY
This is one of my favorite concert venues.  It's an amphitheater with a roof that's at the end of a very large and beautiful walkway that is lined with food trucks and other vendors.  It also happens to be at the site of Woodstock, which is not only very cool and historic, but it also seems to bring a little something extra out of the performers, who must also appreciate how awesome it is to perform on such hallowed ground.  That last part may just be my imagination, but I will say that every performance I've seen here has been incredible.
I could easily fill a small book with photos in and around this venue.  I feel like when people think of New York, their mind goes straight to Manhattan and an urban environment, but the state is also home to some of the most beautiful natural landscapes I have ever seen.  The drive from my home in Northeast Pennsylvania to this venue takes you through small towns and country roads with breathtaking scenic views that make the journey here almost as good as the destination. 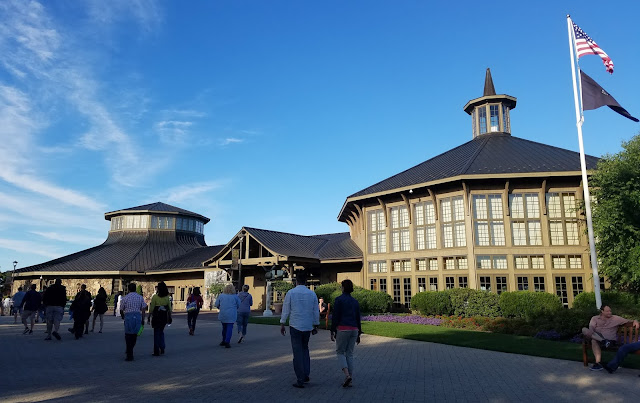 The site is also home to The Museum At Bethel Woods.  It's a wonderful museum that is largely dedicated to the 1969 Woodstock Festival, but it also includes the music and culture of the 60's overall.  We first visited the museum in 2013 and were blown away.  If you ever get tickets to go to a concert at the Bethel Woods Center For The Arts and you have the whole day free, try to get there a few hours before the gates open for the show and spend some time at the museum.  You'll be glad that you did. 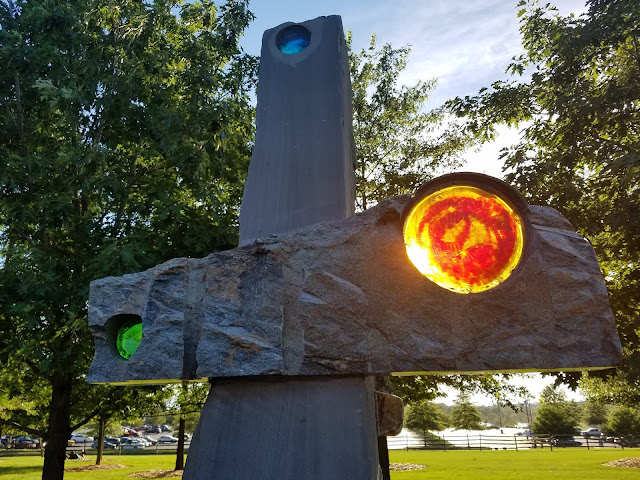 There's quite a few sculptures and other artwork on display here as well.  My favorite was this gnarly statue, which stands on the grounds near the entrance to the Woodstock Museum from the parking lot.  It's called Amber Cross and it was created by artist Glenn Zweygardt.  When I saw it, the sun was shining through the sphere in the foreground at just the right angle to make it look like the Eye of Sauron.

The opening act of tonight's show was a Los Angeles based duo called Deap Vally.  I don't know if I've ever seen a rock duo that consists of a lead guitarist and a drummer without any other instruments.  I am not at all a musical expert, so this observation might seen completely idiotic to someone who knows better.  Regardless, they had a great set.
Quick side note: the photos of the women of Deap Vally above and the closeup shots of Garbage and Blondie were taken with my cell phone of the video screen on the left hand side of the stage.  I was nowhere near the front, so this was the only way I was going to be able to get a picture that didn't make the artists look like blurry ants.  They're not going to win any photography awards, but it's better than nothing.  I can't complain though.  Paying $20 bucks a ticket to see this show would have been a bargain for general admission on the lawn, let alone reserved seating!

Garbage was one of my favorite bands when I was a teenager, and like many other young fans of alternative rock, I had a massive crush on lead singer Shirley Manson.  I played Garbage, especially their first two albums, hundreds of times in the 90's, and I love the music as much today as I did back then.
They played fifteen songs from their discography, which now spans over two decades.  The setlist included many of my favorites, including Sex Is Not The Enemy, #1 Crush, I Think I'm Paranoid, Bleed Like Me, Stupid Girl, Only Happy When It Rains, Push It and Vow.  They also played one of my all-time favorite James Bond songs: The World Is Not Enough.
In the time between the end of their set and the start of Blondie's, it occurred to me that this was the fourth time that I got to see a James Bond song performed by its original artist.  The first three were The Living Daylights by A-Ha in 2010, A View To A Kill by Duran Duran in 2015, and You Know My Name by Chris Cornell, also in 2015.

Debbie Harry is more than just a new wave rock star - she is a music and pop culture icon.  I never thought I'd have the opportunity to see her perform live, let alone in such a historic venue.  They definitely did not disappoint.
Blondie's set started off with a bang with two of their classic hits: One Way Or Another and Hanging On The Telephone.  They followed this up with a song I hadn't heard before.  It was called Fun, and it's the fourth track off of their latest album, Pollinator, which was released earlier this year.  I have to be honest - I had no idea that Blondie was still recording new music.  That's on me for not paying attention, because this song was phenomenal!  I felt like a kid on Christmas morning unwrapping a present when I heard this song, and I can't wait to hear the rest of this album and to do some digging to discover more music that came out in recent years that flew under my radar.
The next song is familiar to just about everybody on the planet - Call Me.  It was released in February 1980 at the dawn of the decade, and it quickly rocketed to #1 where it spent six weeks at the top of the charts.  In my opinion, this is the song that truly set the tone for the 80's; the foundation upon which my favorite era of music was built.  The very next year, Blondie released Rapture, which is an amazing  song that fuses so many styles and was many years ahead if its time.  Getting to see Debbie Harry belt out both of these iconic anthems live is an experience that I will never forget.
Equally amazing was their performance of Atomic toward the end of the regular set.  I swear, I could feel the blood in my veins when I heard the start of the song.  I wasn't familiar with it back in the 80's, but I discovered it when I was 16 and saw Trainspotting for the first time, and I instantly fell in love with it.  I would wager that there's at least a thousand people walking around today who were conceived while Atomic was blasting out of speakers nearby.  All of the music from Trainspotting was incredible - Atomic, Lust For Life, Perfect Day, Mile End, Born Slippy, Temptation, the whole soundtrack is a masterpiece from start to finish.  I don't know which CD got played in my bedroom more; the soundtrack to The Crow or Trainspotting, but both got one hell of a lot of play.
Blondie finished the regular set with their 1979 hit Heart Of Glass, which in my opinion is one of the most under-appreciated songs in the history of pop music.  It effortlessly blends late 70's disco and what would become early 80's new wave.  It is musical perfection.  They closed out the night with a two song encore: The Tide Is High and Dreaming - the perfect end to a perfect night. 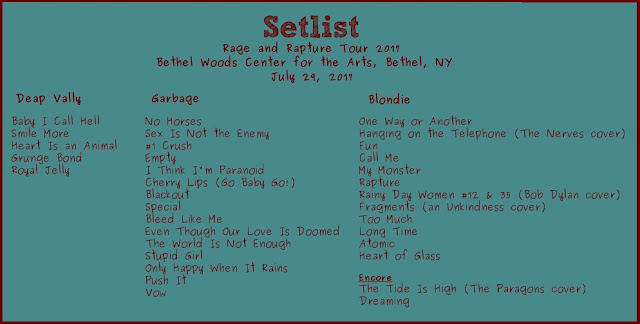