So Meaty, It's Savage 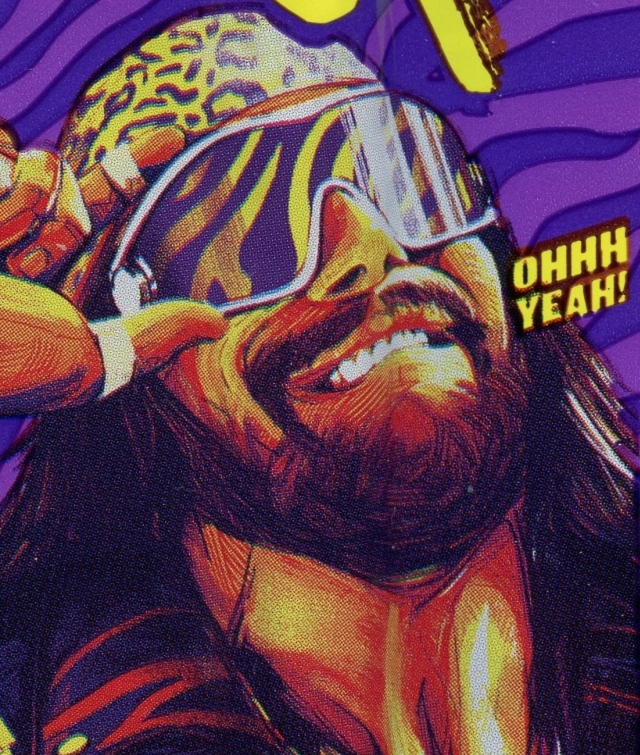 Slim Jim: Savage Size
Conagra Foods (2020)
I'd like to believe that somewhere in a parallel universe, the "Macho Man" Randy Savage title win at Wrestlemania IV and the subsequent Mega Powers Explode storyline led to Hulk Hogan turning heel and adopting his "Hollywood" persona 7 years sooner than he did when he wrestled for WCW.  Imagine how cool that would have been.  We would have had Savage as the hero of the company with Hogan as the villain.  Their WWF Championship match at Wrestlemania V took place exactly two months before No Holds Barred debuted in theaters, so the company could have leaned into this to make "Hollywood" Hogan into an arrogant bad guy who felt he was bigger than the WWF.  They could have even booked a rematch with Savage at SummerSlam with "Hollywood" Hogan bringing No Holds Barred co-star Zeus into the company to be in Hogan's corner.  Zeus could have interfered in the match or gone after Miss Elizabeth to distract Randy Savage and cost him the title.

As any wrestling fan of the era can tell you, it didn't go down that way, and I can understand why.  Hulk Hogan was the golden goose of the WWF and they didn't want to handicap his drawing power and merchandise sales by turning him from a hero to a villain, but I still argue that they could have put that same marketing muscle behind Savage as the hero champion and extended he and Hogan's popularity in the WWF well into the 90's.  Instead, both performers and the WWF as a brand had a sharp decline in the 90's as the company tried and failed to recapture the Hulkamania magic until he finally left the company.

Although Hogan was the bigger star in the 80's, it could be argued that the legacy of Randy Savage has eclipsed that of the Hulkster in 2020.  Even before his separation from the WWE in 2015 over his controversial statements, Hulk Hogan was a name from the past whose days of celebrity endorsements were far behind him.  Compare that to the Macho Man whose smiling face is on WWE Ice Cream Sandwiches and Slim Jim snacks nine years after his death.

This new "Savage Size" Slim Jim isn't your ordinary meat snack.  It tastes just like a regular Slim Jim, but if this thing were any thicker, you could put it in a bun.  I'm not joking; the package lists it as three times larger than a Giant Slim Jim with a net weight of 3 oz.  Compare that to a Nathan's Hot Dog, which is 3.5 oz.  The photos don't do it justice, but consider that the gap in the middle of the bottom photo is there because I couldn't fit the whole thing on my scanner.  I found it at a Sheetz gas station.  I can't remember the exact price, but it wasn't too expensive - maybe two bucks and change.  Not bad for a snack that's equal in size to a whole box of the ones I ate when I was a kid.