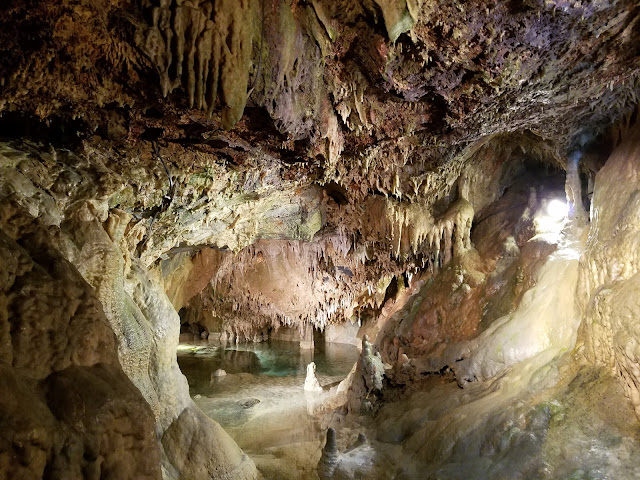 Indian Echo Caverns
Hummelstown, PA
Before this summer, I had never set foot in a cave at any point in my life.  Over the past eight days, I've gotten to experience two.  Last Saturday, we took a boat ride through Penn's Cave in Centre Hill, PA.  Earlier today, we walked through Indian Echo Caverns in Hummelstown. 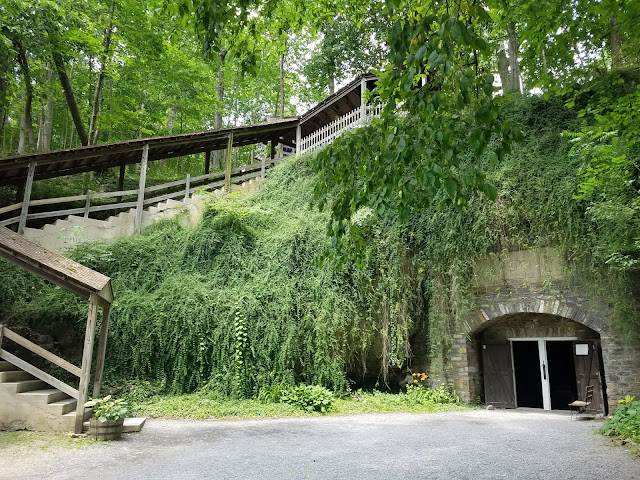 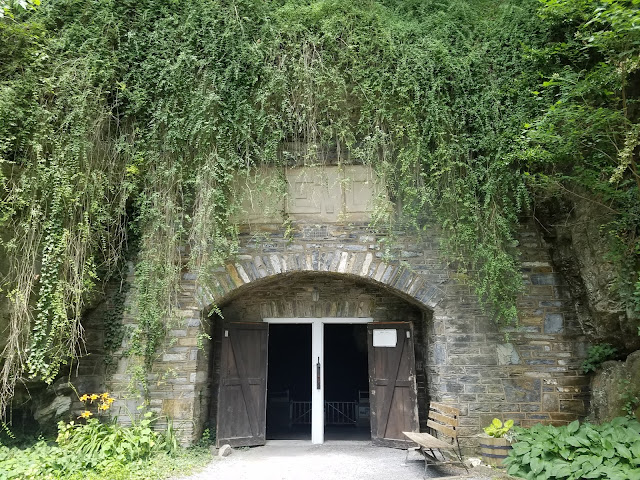 Unlike Penn's Cave, the exploration through Indian Echo Caverns is entirely on dry land.  There is a portion of the caves where we saw the underground Crystal Lake (the photo at the top), but you walk over it on a foot bridge.  Our guide led us through while explaining the history of the cave and geological facts about how each of the stalactites and stalagmites were formed over hundreds of thousands of years.
These photos don't even come close to capturing the feeling of being surrounded by the cave, but here are some images from our journey. 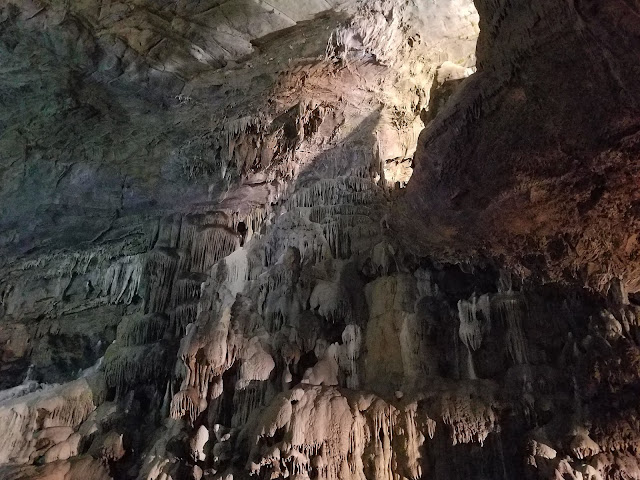 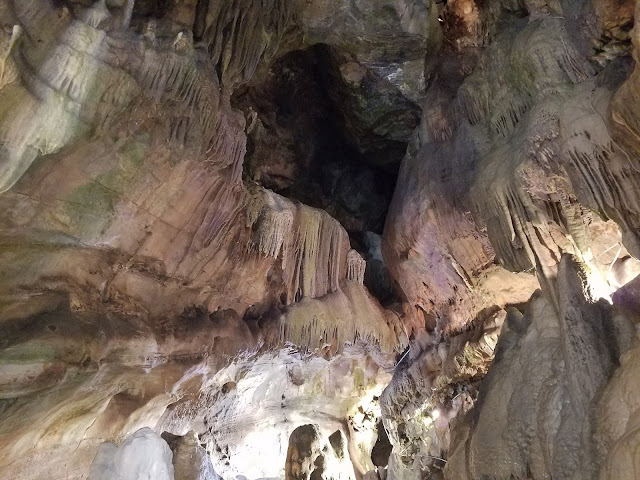 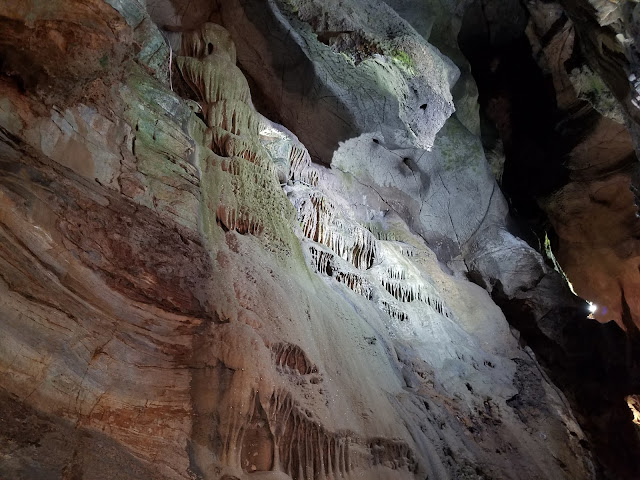 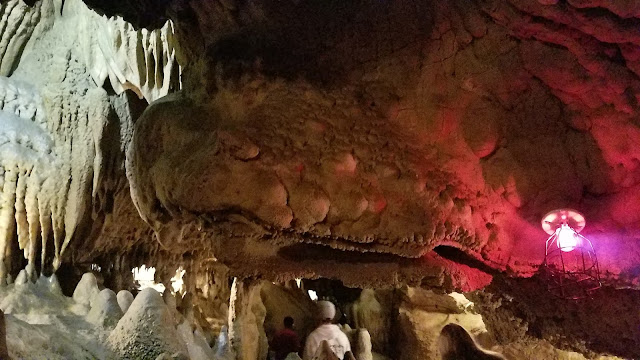 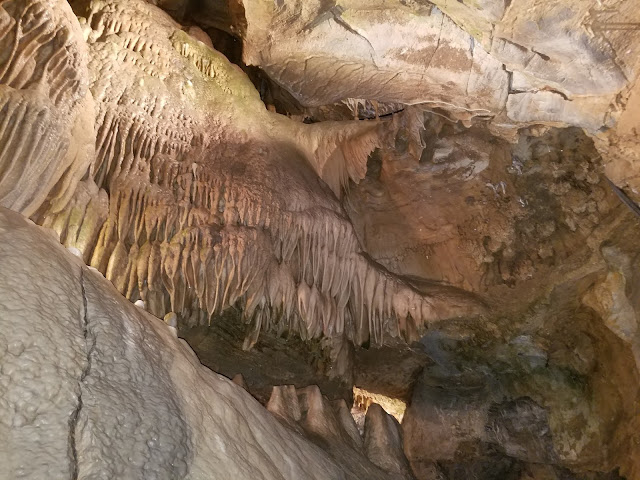 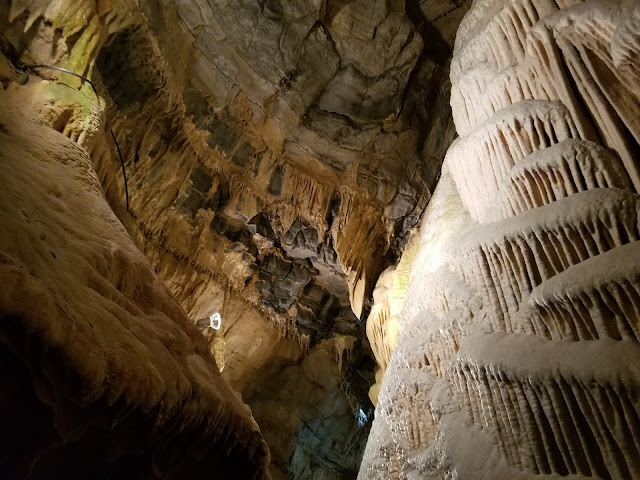 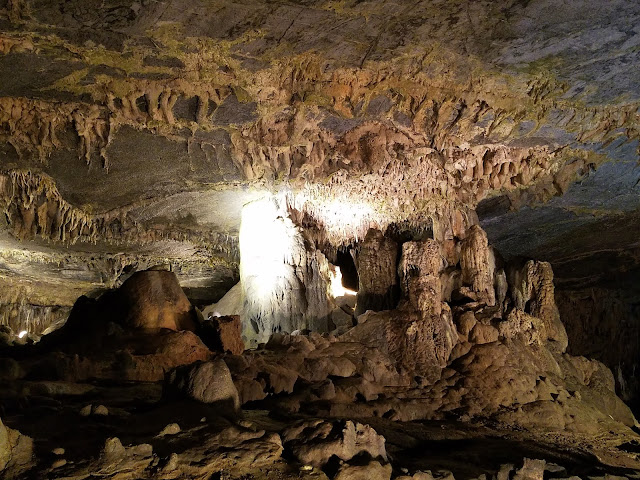 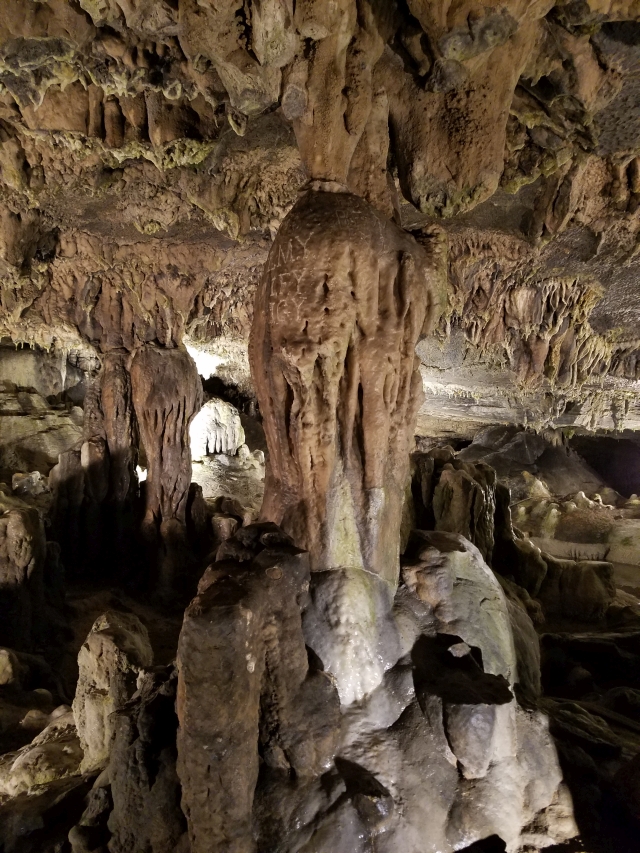 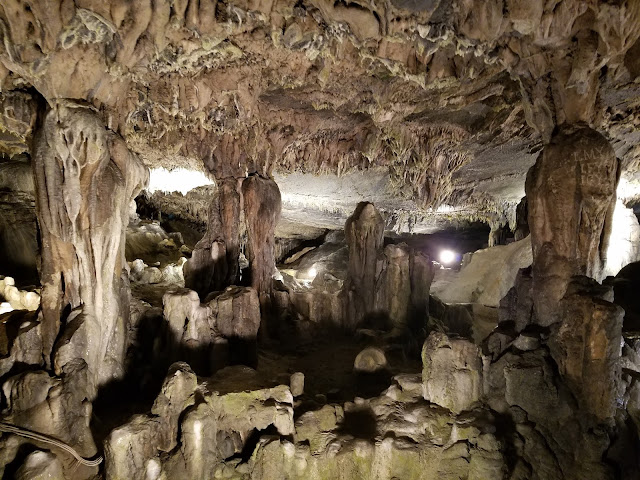 The area shown in the photos below have a pretty interesting story behind them.  Our guide explained to us that this room was once the home of a man named William Amos Wilson, who was posthumously known as "The Pennsylvania Hermit". 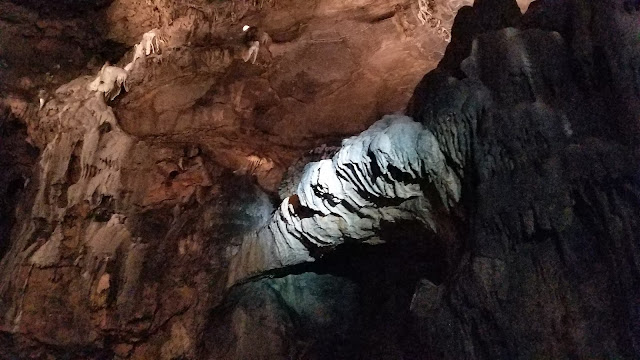 The long horizontal rock in the center of this photo was where Mr. Wilson slept from 1802 until his death on October 18th, 1821.  It's about ten feet off of the ground and has a large open space on the cave floor beneath it. 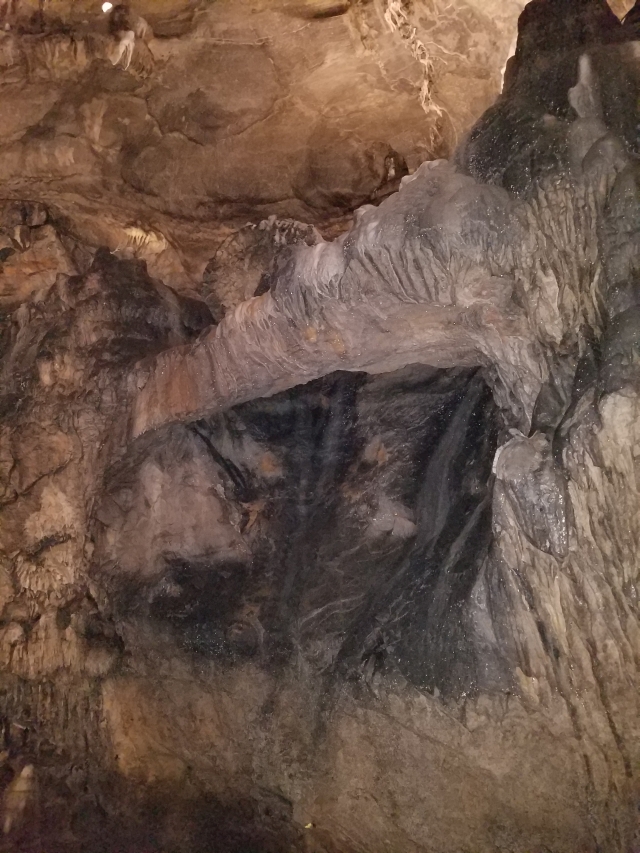 The wall of the cave beneath the area where Mr. Wilson slept is black.  This is because he would typically build a fire and cook his meals in the area beneath the rock where he slept.  This not only kept the cave warmer than the approximate 52 degree temperature that the cave held regardless of the temperature outside, but it also heated the rock to give him a warm place to sleep. 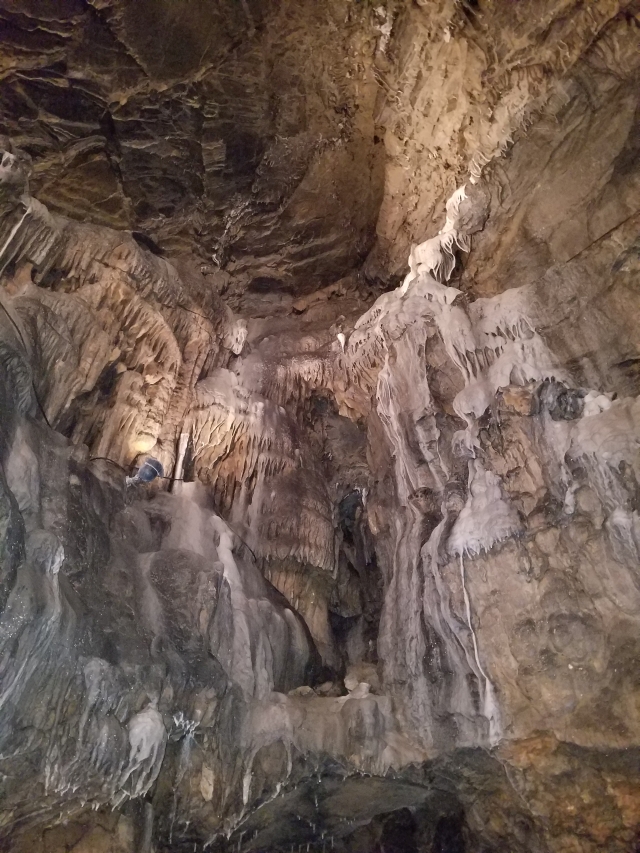 One of the reasons why so much is known about Mr. Wilson is that he kept meticulous journals throughout his life.  They were found inside this circular indentation on the back of the cave wall in the "room" where he slept. 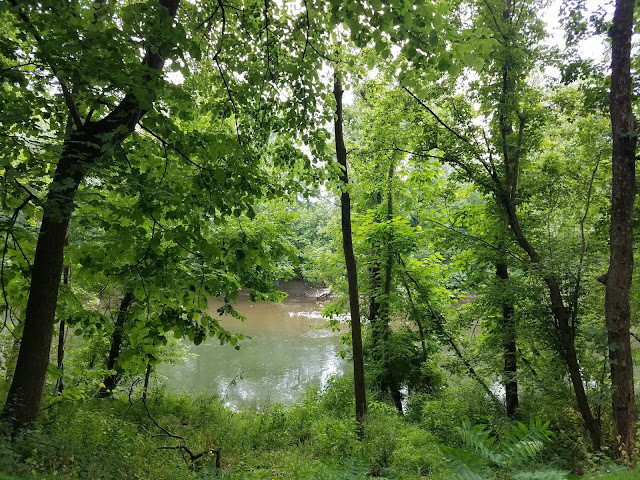 At the entrance and exit of the caverns is a scenic view of Swatara Creek.  If not for the tour groups going in and out of the cave, this would be a fantastic place to relax and read a book.  There was about a 15 minute gap in between new groups going into the caverns, and during that time, it was very peaceful and quiet, with the only sound coming from nature.
I couldn't pick a favorite between Penn's Cave and Indian Echo Caverns.  Even though they're both caves where you explore rock formations, they're entirely different experiences, and both of them are worth visiting.  When you're finished exploring Indian Echo Caverns, there's a pretty nice looking mini golf course next door, so a trip to the caverns will definitely keep you busy with fun things to do for an afternoon.