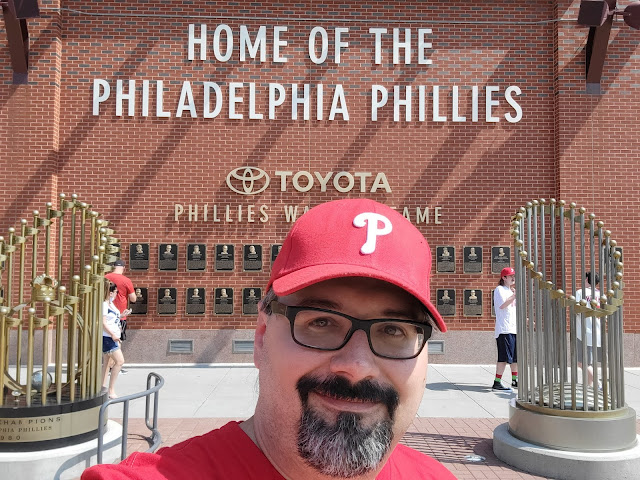 Friday, July 16, 2021
Double Header: Miami Marlins @ Philadelphia Phillies
Citizens Bank Park - Philadelphia, PA
When the game on my birthday was rained out, it was rescheduled as a single-admission double header for July 16th.  As luck would have it, this was the only day of Joe Bob's Jamboree that we didn't have tickets for, so I'm getting to see two games for the price of one.  Major League Baseball is still operating under some of the bizarre 2020 pandemic rules, including the fact that double header games are seven innings instead of nine, but it's still a pretty sweet deal.
Unfortunately for the rest of the Mutant Fam at the Jamboree, it poured buckets in Lehighton throughout the day.  However in Philadelphia, there was nothing but sunshine - lots and lots of sunshine.  The oppressive heat only started to ease up with the sun went down toward the end of the second half of the double header. 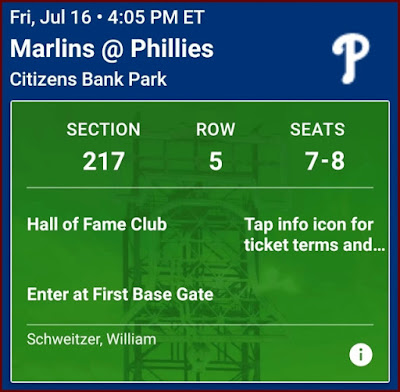 I've only been to one double header before today.  It was back in 2009, and it was one of the best times I've ever had at a ballgame.  The Phillies shut down the Mets in both games, with Pedro Martinez throwing 130 pitches over 8 shutout innings against his former club in the night game.  The atmosphere was electric.  However, there was one thing that happened in the first game of tonight's double header that has never happened to me before, and I have to nerd out about it for a little while before I get into the details of the game. 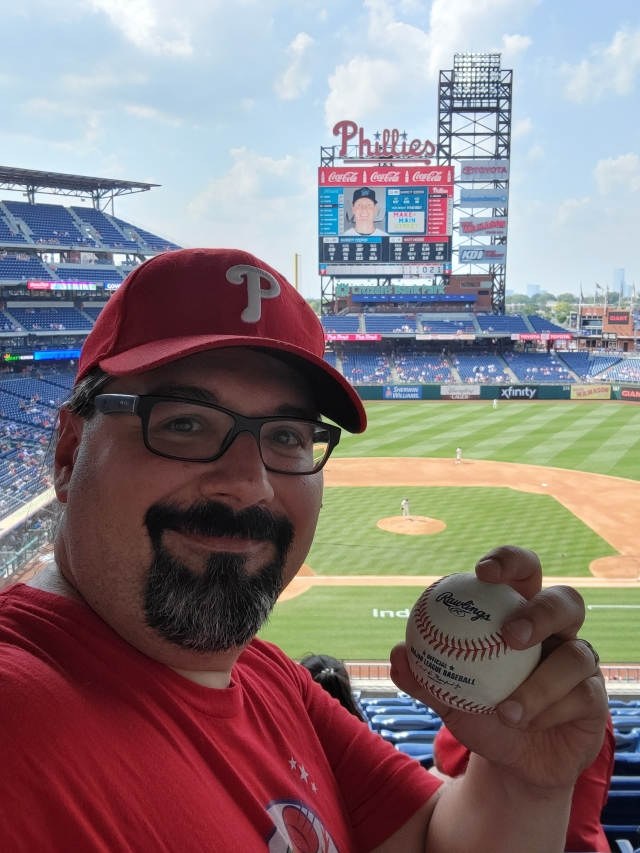 In over 30 years of going to the ballpark, since my first game when I was ten years old, I have never caught a foul ball.  In fact, I've never been to a game where one was hit anywhere close to me.  That changed in the top of the first of the first game of tonight's double header.
I was sitting in Section 217, Row 9, Seat 11.  Our tickets were actually for the fifth row, but it was nearly 100 degrees and the sun was blaring down on the fifth row, but the 9th row was in the shade and the seats were empty, so we sat there for the first game.  Marlins right fielder Garrett Cooper fouled off the 12th pitch of the game thrown by Phillies starter Matt Moore.  It was hit directly at the spot between where Angie and I were sitting.  I didn't even have to stand up; I just reached out with my left hand and... yoink - I caught my very first foul ball. 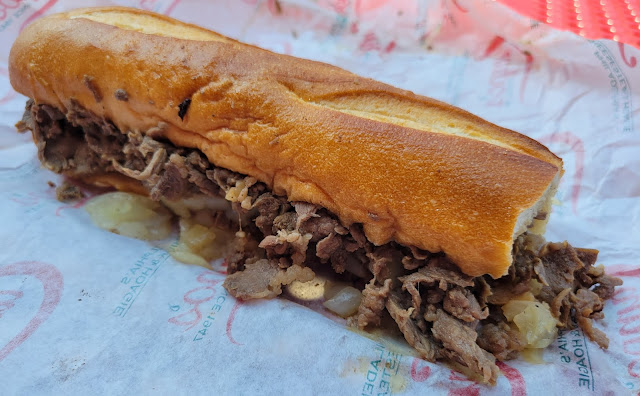 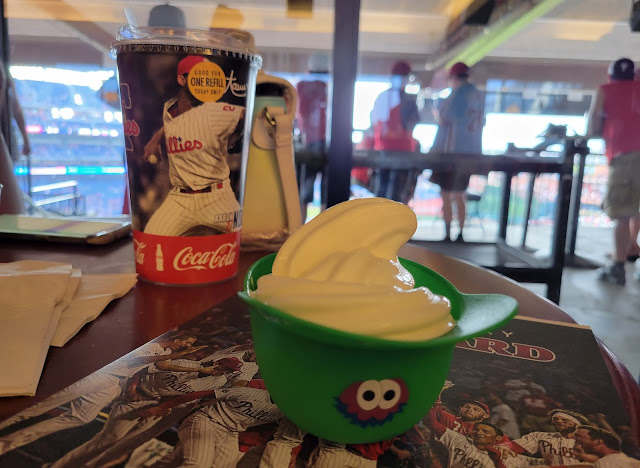 It was a crazy hot day at the ballpark, so the only hot food that I had was a cheesesteak from Campo's.  When people from out of the area talk about Philly, the conversation often turns to who has the best cheesesteak.  It's the kind of thing that some folks have irrationally strong opinions about.  Personally, I think that the ones sold in and around the city are all pretty much the same.  Most of 'em have the same ingredients and the same suppliers.  If you get one that's disappointing, or doesn't have enough cheese, or one that's especially good, I think it has more to do with the person working the grill than it does the restaurant.  I like Campo's because you can get a steak with hot peppers if you want, but aside from that, I couldn't tell the difference between one of theirs compared to a steak from Pat's, Geno's, Tony Luke's, Jim's, or any others I've had in the city.
The perfect dessert after your cheesesteak on a hot summer day at Citizen's Bank Park is ice cream in a plastic helmet.  This year, they have little green Phillie Phanatic ones. 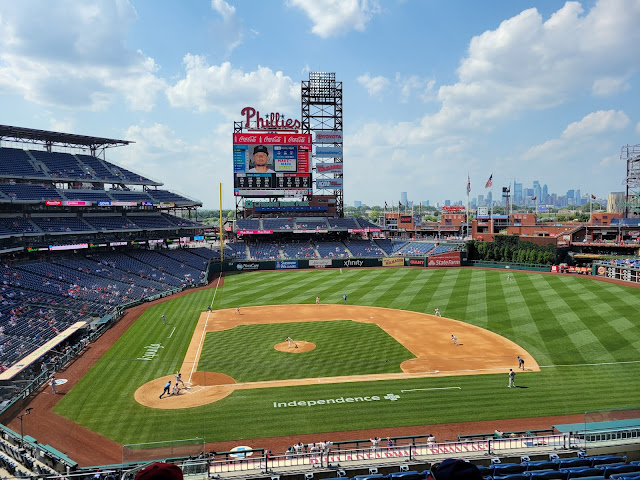 Game One
Pitching: Sandy Alcantara vs. Matt Moore
Results: Phillies defeated Marlins, 5-2
I was hopeful that the Phillies might have uncovered a diamond in the rough when they signed Matt Moore last winter.  He's a former All-Star who bounced back from injuries last year when he finished his season in Japan with a 6-3 record and a 2.65 ERA, and he no-hit the Yomiuri Giants for 7 innings in the 2020 Japan Series.  Things haven't worked out as well as I hoped, but Moore has had a few good appearances this year, and this turned out to be one of them.  He struck out 9 batters with no walks in 4 ⅓ innings of work.  Moore did give up 2 runs on 6 hits, but Archie Bradley and Ranger Suarez kept the damage limited to that.  Each reliever gave up one hit with no walks or runs.  Bradley lasted 1 ⅔ innings and was credited as the winning pitcher for reasons I cannot properly explain, and Suarez recorded three strikeouts in the 7th for his third save of the season.
Miami's bats weren't exactly dead during this game.  Shortstop Miguel Rojas had the best game at the plate, going 3-4 with a double.  Jazz Chisholm and Jon Berti also hit doubles, Starling Marte and Garrett Cooper went 1-3, and Joe Panik came into the game in the bottom of the 4th and went 1-2.  However, at the end of the game, Marlins batters had 12 strikeouts and no walks. 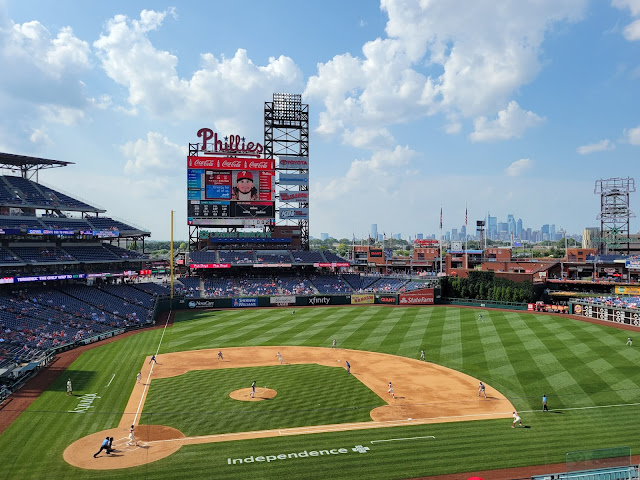 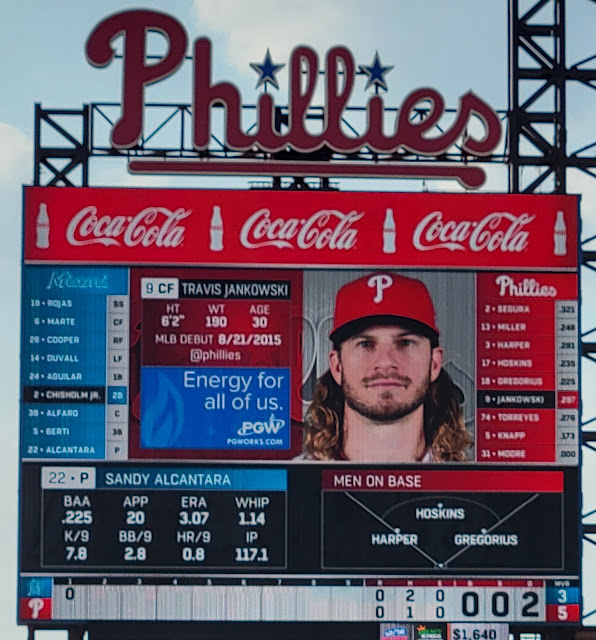 Travis Jankowski had a hell of a game.  He started in center field for the first game and, with the bases loaded in the bottom of the 1st, hit a double to score Bryce Harper, Rhys Hoskins and Didi Gregorius.  Jankowski went 3-3 with 4 RBI on the night.
Bryce Harper went 1-3 with a double, and both Jean Segura and Ronald Torreyes went 1-3 with singles.  Torreyes got the start at 3B because Alec Bohm tested positive for Covid-19 (he was actually removed from a game in the 8th inning on July 10th when the test came back).  If I'm being honest, I wasn't super excited when the Phillies acquired Ronald Torreyes, but he's been an incredible addition.  He plays multiple positions, he's better defensive shortstop or third baseman than either Gregorius or Bohm, and quite frankly, he's had a far more productive season at the plate as well.  An argument could be made to bench either of them and award Torreyes the starting job. 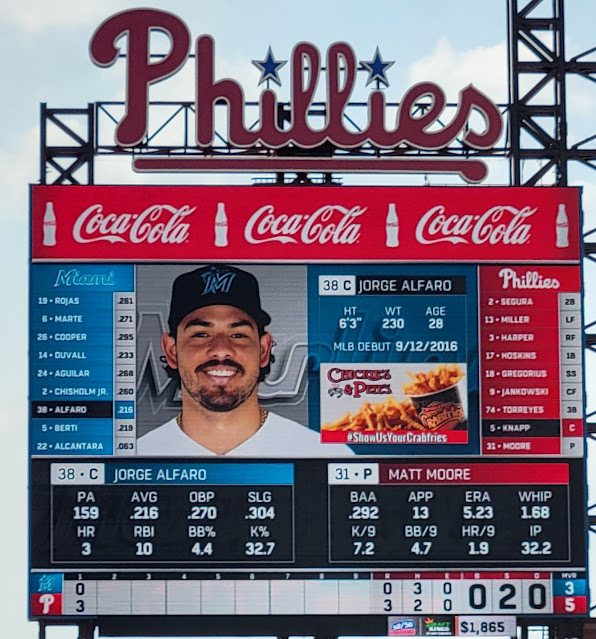 Our old friend Jorge Alfaro was catching for the Marlins in the first game of this double header.  Unfortunately for Miami, he hasn't been doing all that well since the Phillies traded he and Sixto Sanchez for J.T. Realmuto.  He entered this game hitting .216 with an OPS of .270, and he went 0-3 with three strikeouts. 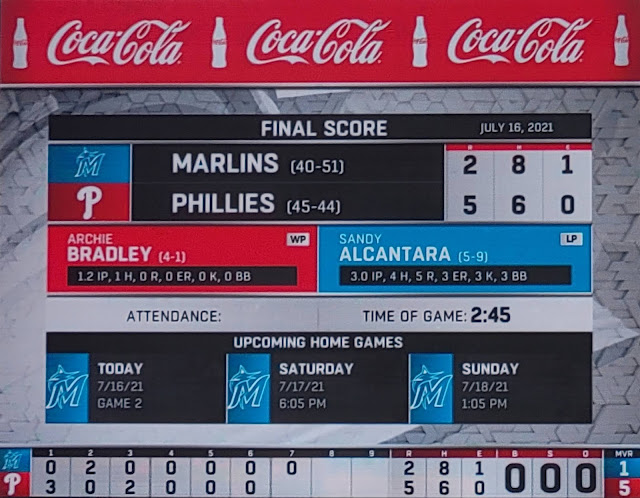 I can assure you that the attendance of the first game of this double header was not zero. With this 5-2 victory over the Marlins, the Phillies were over .500 for a brief moment after the All-Star Break. 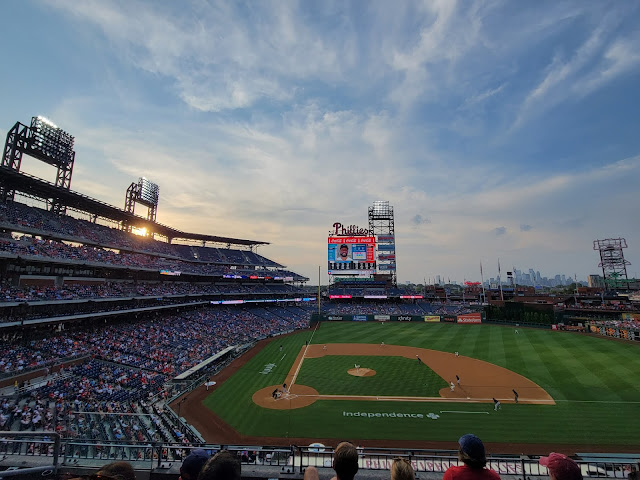 Game Two
Pitching: Ross Detwiler vs. Zach Eflin
Results: Marlins defeated Phillies, 7-0
The second game of the double header didn't go quite as well for the home team.  Jazz Chisholm reached first base after Didi Gregorius botched yet another routine ground ball to lead off the game, and Starling Marte homered to give the Marlins an early 2-0 lead.  It would be more than enough, but Miami continued to tack on runs throughout the game.  An RBI single by Jesus Aguilar made it 3-0 in the top of the third, and Starling Marte hit an RBI double in the top of the fourth to widen the Marlins lead to 4-0.  Zach Eflin followed this up by walking Garrett Cooper, which finally inspired Joe Girardi to go to the bullpen. 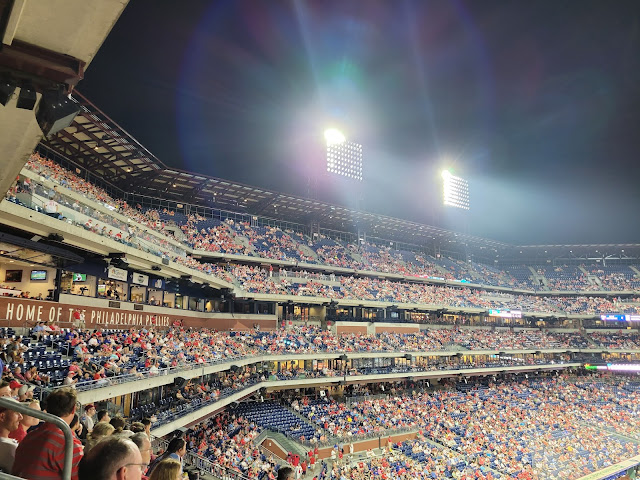 Unfortunately for the Phillies, Girardi brought in Enyel De Los Santos to pitch, which is not a name that inspires a lot of confidence.  Philadelphia acquired him from the Padres in the winter before the 2018 season in a trade that sent Freddy Galvis out of town.  Galvis was a phenomenal defensive shortstop and one of my favorite players of the past 20 years, but the Phillies wanted to make room for top prospect J.P. Crawford, so the trade seemed to make sense at the time.  The Phillies would go on to ship Crawford to the Mariners just one year later where he has since developed into a Gold Glove shortstop.  Galvis is now with the Orioles, and Crawford is still with the Mariners.  Both are having significantly better seasons, both offensively and defensively, than Didi Gregorius, and at a fraction of his salary.  The Phillies front office of the last decade truly was horrendous in every sense of the word.  But anyway, back to the game...
With two outs and a runner on first and second, Enyel De Los Santos was brought in to face Jesus Aguilar.  He got two quick strikes before giving up a three run homer which extended the Marlins lead to 7-0.  To his credit, De Los Santos came back to pitch a clean 5th inning, but the damage was done. 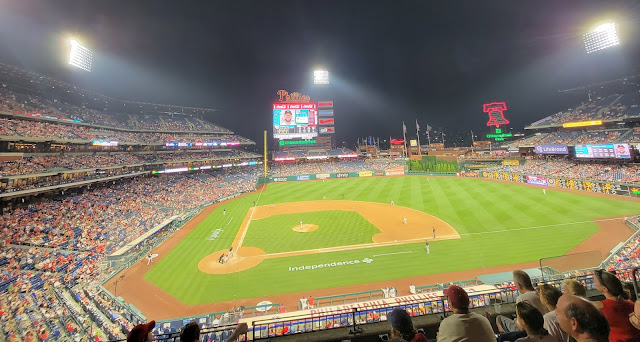 The Phillies brought in J.D. Hammer to pitch the 6th inning.  Hammer came to the Philadelphia in a 2017 trade deadline deal that sent Pat Neshek to Colorado, and like De Los Santos, he has had his ups and downs in the minors.  He's been having a great season with the Iron Pigs so far in 2021, and that continued in tonight's game with a clean inning.
Mauricio Llovera came in to pitch the 7th and got into a little bit of trouble.  He hit Jesus Aguilar with a pitch and gave up a single to Miguel Rojas put runners on first and second with two outs.  Thankfully, he retired Marlins catcher Sandy Leon on a fly ball to end the inning without giving up a run. 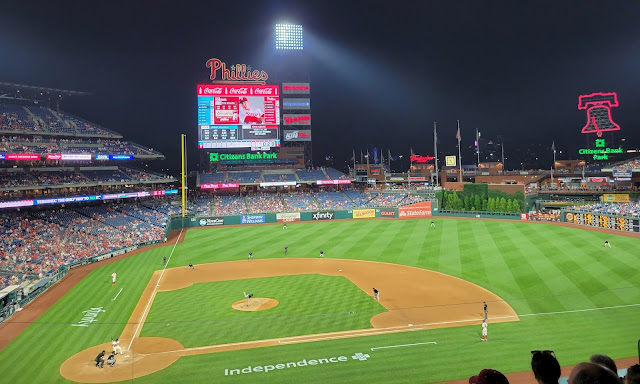 One run would have been plenty for the Marlins, because the Phillies bats went absolutely silent in the night game.  The closest they came to scoring was in the bottom of the first.  JT Realmuto doubled with one out and advanced to third on a wild pitch.  With two outs, Andrew McCutchen walked to put runners at the corners, but Ross Detweiler struck out Didi Gregorius to end the inning.
The Marlins brought in Jordan Holloway, who struck out six batters over five no-hit innings of work.  The only baserunners he allowed was a walk to Rhys Hoskins in the bottom of the third, and Andrew McCutchen, who drew his second walk of the game in the 6th.  Richard Bleier came in to pitch the 7th and final inning.  He gave up a single to Luke Williams, which was the first Phillies only other hit since Relamuto's double in the first inning,

Yikes, that's ugly!  So, the Phillies end the night right back at .500 where they started.  I have no idea what Dombrowski is going to do at the trade deadline.  With the injuries suffered by the Nationals, Braves and Mets this season, there may be no better time than the present for the Phillies to go all in for a 2021 NL East Division Championship, but there aren't a lot of prospects on the farm to work with.  If it were up to me, I'd like to see them swing a mega deal with the Cubs for Craig Kimbrel, Kris Bryant and Javy Baez, and I'd be open to moving any prospects or young talent to make it happen, including Alec Bohm.  I'd prefer if they didn't trade Mick Abel, but with how our pitching prospects tend to turn out more often than not, I wouldn't consider it a dealbreaker if he had to be included in the deal.

There was a fireworks show after the second game, and I think this may be the best one I've ever seen.  I kept my phone held up to my chest and wasn't looking at the screen, so this recording doesn't even come close to doing justice to how awesome it was.  It was a perfect end to a great night at the ballpark.