Ernest Goes To The Drive-In 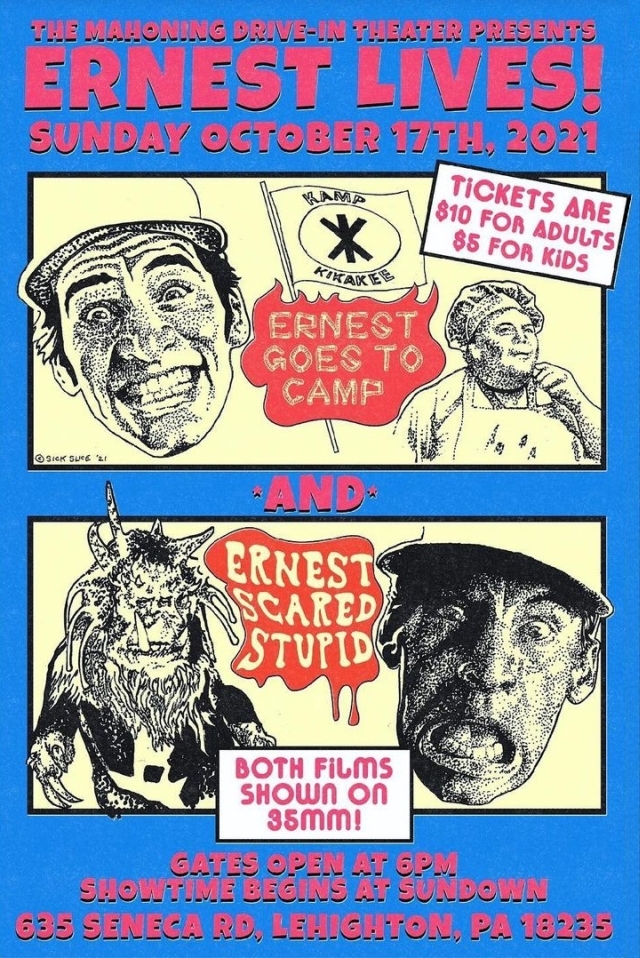 Ernest Lives
Mahoning Drive-In Theater - Lehighton, PA
Poster artwork by Hayden Hall (Sick Slice Studios)
Virgil put it best on Mahoning Radio last night when he said that Jim Varney is an American treasure.  The dude invented a unique character in Ernest P. Worrell that could get a marble statue to smile.  He's not a very complicated character, but he has the rare talent of actually being fun for the whole family.  Ernest is like a sundae with chocolate sauce and sprinkles - it doesn't matter if you're 5 or 95, it's going to make you happy.  Ernest is comedy ice cream. 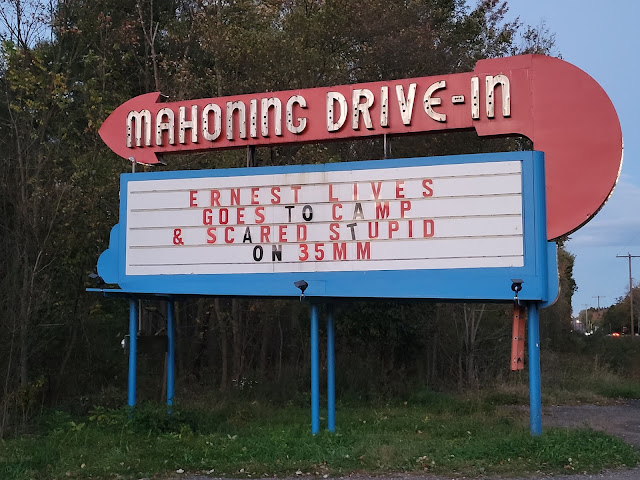 The Ernest movies that I know best are Ernest Goes To Jail and Ernest Saves Christmas.  My grandfather took me to see the latter when I was eight years old, and I still watch it every year during the holidays.  Neither of these movies were on the bill last night, but I was kind of glad because this gave me the opportunity to see two of his movies that I'm not as familiar with. 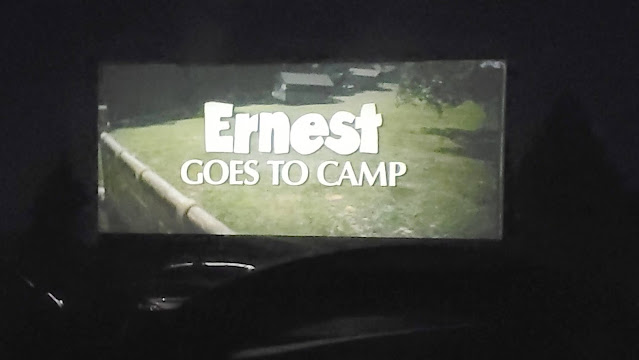 Ernest Goes To Camp is the first feature length film starring the Ernest P. Worrell character, and as such, it's a movie I always thought that I had watched before.  On Friday, I saw A Knight's Tale at the Mahoning, which I thought that I hadn't seen it before.  However, after a few minutes, I remembered that I did watch it once when it first came out and the memory of the plot came flooding back to me.  Ernest Goes To Camp was the opposite experience for me.  I had seen many Ernest films when I was growing up, and I've seen so many family films involving a summer camp that I always figured that I must have watched this one too.  After about five minutes, I realized that I hadn't.  So, not only did I get to see an Ernest double feature at the drive-in, but I unexpectedly got to see the first Ernest film for the very first time in my favorite place in the world to see a movie.  It's a very funny movie that I enjoyed a lot, and although I didn't realize that I hadn't seen it before, I don't think I'll ever forget that I got to see it last night.
The cast includes Richard Speight Jr, who I recognized from his roles in Jericho and as the angel Gabriel in Supernatural.  It also features John Vernon, who is probably best known for his role as the dean in Animal House, but who I know best as Officer Mooney in Killer Klowns From Outer Space, which I saw at the drive-in earlier this year. 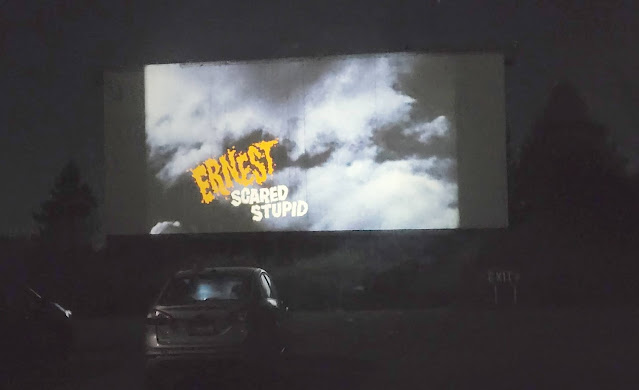 Ernest Scared Stupid is a movie that I know I've watched before because it's something I try to watch every October.  It's a great family Halloween flick, and like the first half of this double feature, it has a connection to Killer Klowns From Outer Space.  The Chiodo Brothers, who wrote and directed Killer Klowns, did the creature effects for Ernest Scared Stupid, and two of the troll masks used in the film began their life as Killer Klowns and were modified to be used in the Ernest film.
Ernest Lives was a lot of fun, and I hope that it becomes an annual event.  His movie catalog is long
enough that they could do an annual double feature for the next three years before they'd have to repeat a film, and judging by the size of the crowd on the lot last night, I expect that it would be a big hit.