Freddy Fest III
Mahoning Drive-In - Lehighton, PA
I recently made a list of all of the movies and events that we've attended at the Mahoning Drive-In Theater.  At the end of the second night of Freddy Fest III, we're up to a total of 61 different full length features over 36 events, dating back to Roger Rabbit on May 9th.  We've watched a lot of great films and met awesome people from the staff, the audience, and the special guests who have worked on the movies themselves.  It really has become a home away from home. 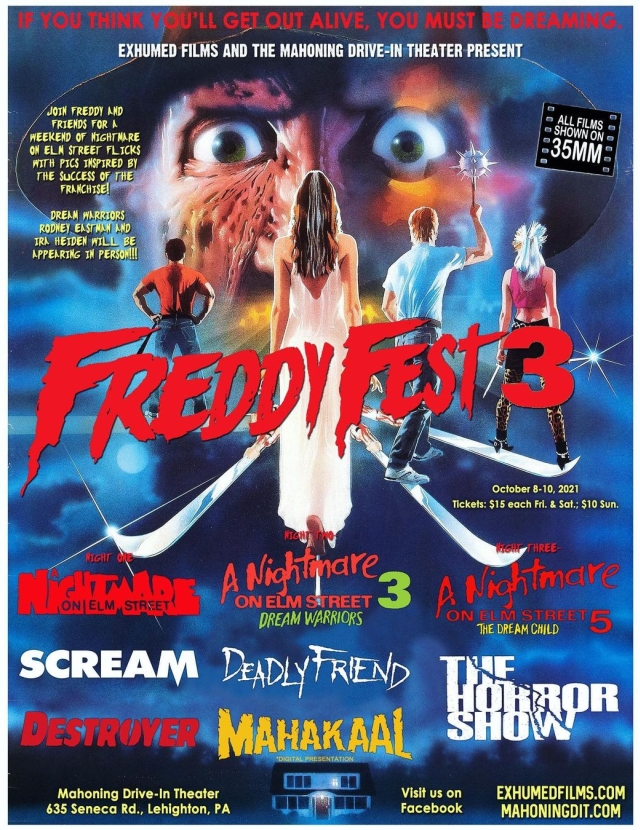 The original lineup for this show when it was first announced included Scream as the second feature of Night One, but for reasons beyond the control of the folks in charge of the Mahoning Drive-In Theater, it was pulled from the lineup and replaced with Hello Mary Lou: Prom Night II.  For as much as I enjoy Scream, I think Prom Night II is a better fit for this event.  I'm hopeful that the Mahoning will be able to show Scream sometime in 2022, maybe on a 90's horror themed night. 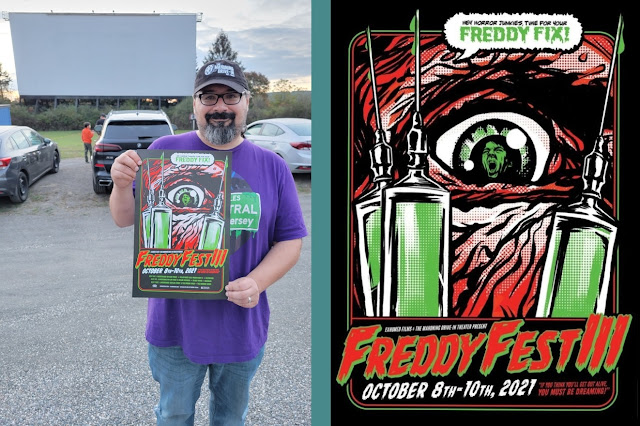 The poster for this event was as incredible as I've come to expect from an event at the Mahoning Drive-In Theater.  This one was designed by Jason Cortez of Sons Of Thunder Studios.  My guess is that the studio name is a reference to the appearance of Galactic Cowboys in the mid 90's comedy Airheads, but it could just be a coincidence.
On a side note, I know I've probably written this before, but I'd love to see the poster artists get together with the Mahoning to create a series of trading cards or commemorative ticket stubs that feature some of the poster artwork over the years.  The back of the card can have facts about the movies, or the history of the movie at the Mahoning, such as the dates that the film aired at the drive-in during its original theatrical run, or dates that its stars appeared on the lot.  They'd make an excellent collectible, and they would be inexpensive to ship if they ever decided to create an online store as a source of revenue for the drive-in and the artists. 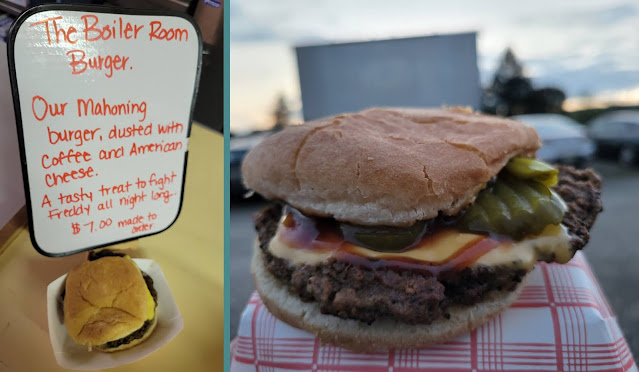 The special themed food for Freddy Fest III was The Boiler Room Burger.  It's a cheeseburger that has been dusted with coffee (I added the pickles and barbecue sauce).  Like the Cotton Candy Cocoonburg that I had earlier this year, it sounds like a strange combination, but it was really excellent!  I don't just mean that it's an interesting novelty to try - I mean it's a surprisingly delicious addition to a cheeseburger.  I'm going to have to try to replicate this next time we make cheeseburgers at home. 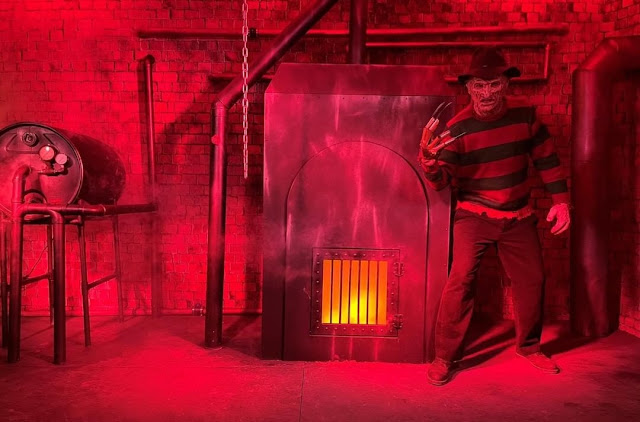 The photo op outside of the concession building was something else.  This one even tops the Texas Chainsaw Massacre set that they had for Weekend Of Terror VI.  I had my picture taken with him on Friday, and I thought about going back up on Saturday so that Harvey could be in the photo too, but there was a line and my little pup wanted to go for a walk.
Night One - Friday, October 8
A Nightmare On Elm Street, Hello Mary Lou: Prom Night II and Destroyer 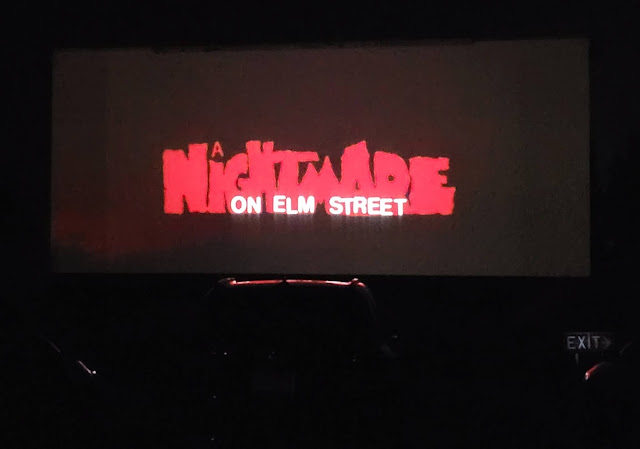 The first movie of the night was the original 1984 classic, A Nightmare On Elm Street.  I was four years old when this was first released in theaters, so I didn't catch it on it's initial run.  However, every kid I knew in elementary school (including myself) was obsessed with the Nightmare On Elm Street and Friday The 13th movies.  I know that I first saw this movie at a friend's house on VHS back then, but I can't remember exactly when. 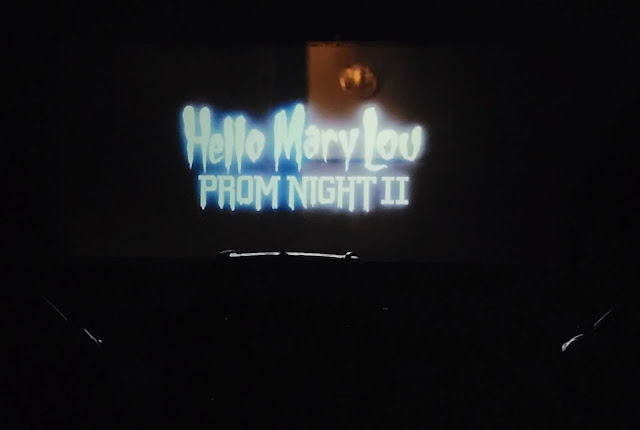 The second movie was Hello Mary Lou: Prom Night II.  This was first released in 1987, but I didn't see it until a couple of years ago when it was the season finale for the first year of The Last Drive-In on Shudder.  In my opinion, it's one of the best horror movies of the decade, and one of the few times when a sequel lives up to the original.
We were both exhausted after the second movie, so we went home during the second intermission before the start of the 1988 slasher flick, Destroyer.  I woke up around 4:30 am for work, and the third movie of the night wouldn't have started until 12:30, so if we were going to go to Night Two, we had to get some sleep.
Night Two - Saturday, October 9
A Nightmare On Elm Street 3: Dream Warriors, Deadly Friend and Mahakaal 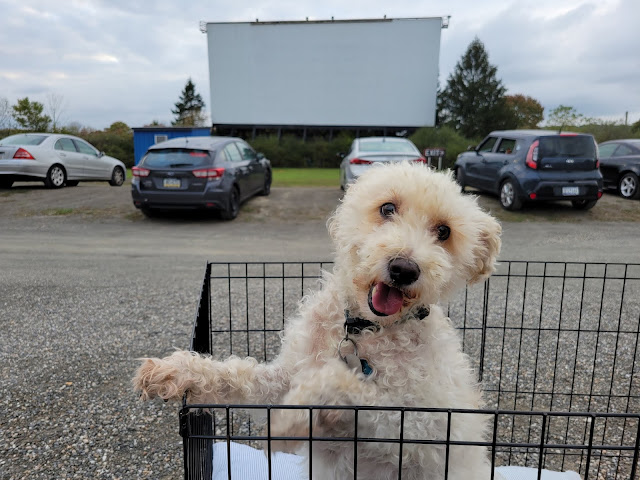 Little Harvey came with us for Night Two.  He loves to go to the drive-in to meet new people and the other puppies on the lot.  One of the people that he met was actor Rodney Eastman, who was on the lot taking pictures and signing autographs for fans.  He played Joey Crusel on A Nightmare On Elm Street 3: Dream Warriors, which is the first film that was shown on Saturday, and 4: The Dream Master, which is not being screened at Freddy Fest this year.  Mr. Eastman has also had many appearances in television series over the past 30 years.  The one that I'm the most familiar with is a Season 3 episode of Sliders called The Dream Masters.
I feel kind of bad not getting his autograph.  We bumped into each other while I was at the Exhumed Films table, and Harvey walked up to him.  He seemed like a really good dude and he was very nice to Harvey, but the prices for autographs and photos were more than I felt comfortable paying.  When we first started going to the drive-in, I had this idea to buy a notebook and ask all of the celebrities who visited to sign it so that I could kind of make a scrapbook.  However, at the current rates that actors usually charge for autographs at signings and conventions, that scrapbook would end up costing more than my car.  I mean no disrespect to anyone by not participating - I understand that the special guests who visit the Mahoning are just trying to make a living.  It's just not something I can afford to keep up with. 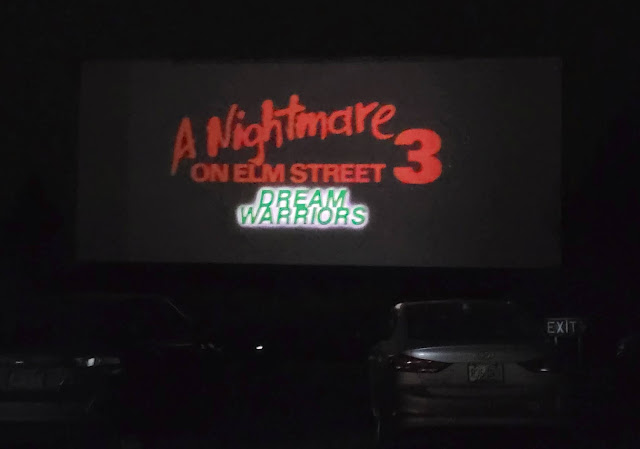 Dream Warriors is my favorite of the Nightmare On Elm Street sequels.  It follows a group of teenagers at a psychiatric hospital who have been terrorized by Freddy Krueger.  Their family and the staff believe the children are suicidal, and they're disturbed by the violent reactions of the kids in their care every time they try to give them a sedative.  Nancy Thompson (the final girl from the original Nightmare On Elm Street) begins working as an intern therapist at the hospital and recognizes that Freddy has returned.
Every so often, they show an original 35mm print of an old cartoon before one of the movies.  Before the trailer reel for the second feature, they screened a 1956 print of Wideo Wabbit, a Loony Tunes short featuring Bugs Bunny and Elmer Fudd.  Prior to this, Rob explained that due to the age deterioration of the reel, tonight may be the final time that it will be in a playable condition.  I don't generally like the idea of videotaping the screen, but the fact that this may be the final time that a 65 year old cartoon reel is screened for an audience seemed to me like something that should be preserved. 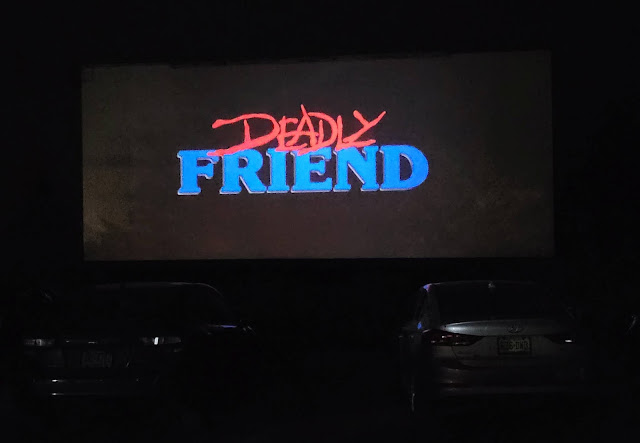 The second movie of Night Two is another Wes Craven horror classic, and it's one of my favorite horror flicks of the 80's.  It's called Deadly Friend, and it made its debut in theaters exactly 35 years ago today, on October 10th, 1986.  In my opinion, it's not an especially great title.  I don't really have a suggestion of what it should have been called, but "Deadly Friend" doesn't really give a very accurate picture of the plot. 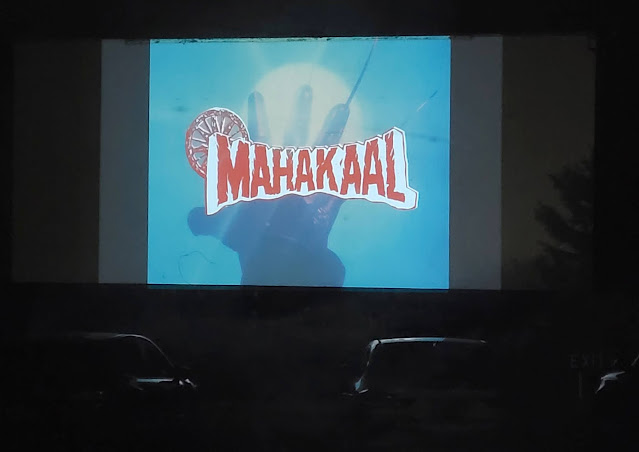 The final movie of the night is by far the weirdest thing I've ever seen at the drive-in.  The movie is called Mahakaal.  It was released in India in the mid 90's, and it's Bollywood's attempt to make their own version of A Nightmare On Elm Street.  Their version of Freddy is an evil magician named Shakaal who wears a glove with knives for fingers and sacrifices children.  It directly copies many of the death scenes from the Nightmare On Elm Street series, and it includes quite a few very long and very strange song and dance segments.  It was released on home video in the United States in 2009, so if you love Freddy movies and want to spend two and a half hours watching a bizarre fever dream that will leave you wondering what the hell is going on, definitely check it out - just be sure to have some alcohol ready. 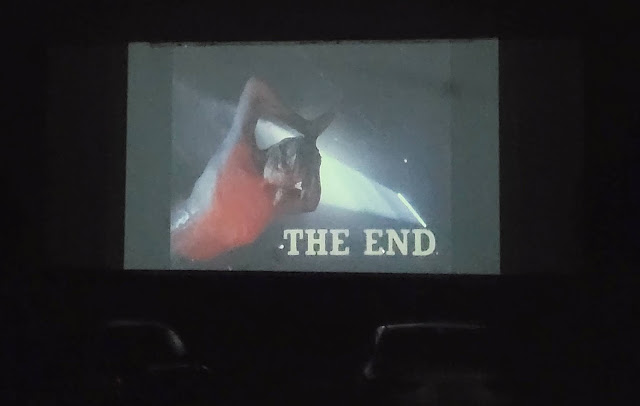 And that's a wrap for the first two nights of Freddy Fest III.  They're showing A Nightmare On Elm Street 5: The Dream Child and The Horror Show tonight, but as much as I love the Mahoning, I can't go to every show, but I'll be back soon enough!