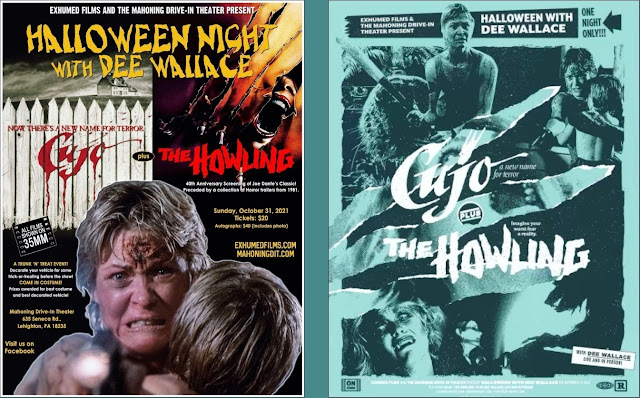 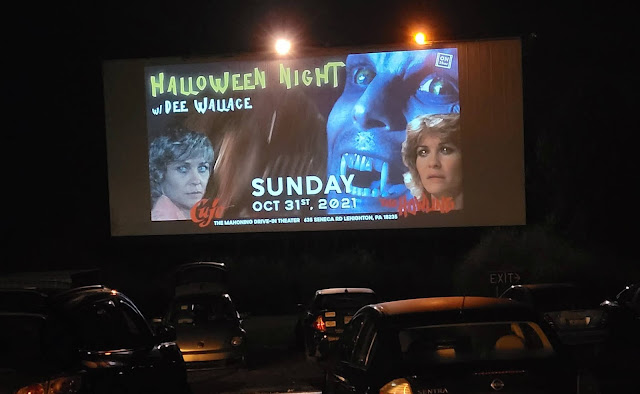 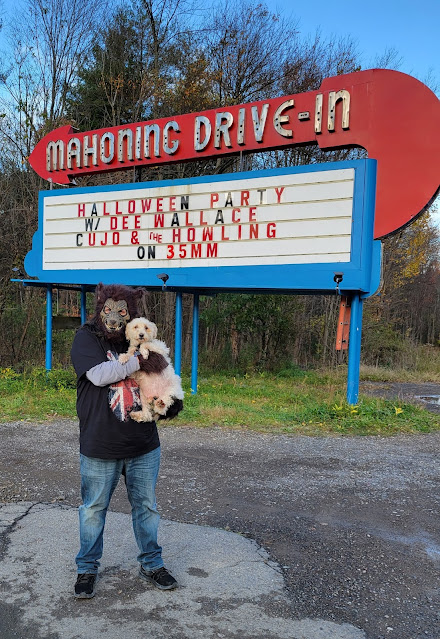 Since it's Halloween and we're going to see a werewolf movie, I decided I'd come dressed as a werewolf.  I didn't have a body costume, so I threw on a shirt with the Union Jack with the idea that I was one of the Werewolves Of London.  The mask didn't fit over my face while I was wearing my glasses so I didn't wear it for very long, but I was able to get a nice picture of Werewolf Will with little Harvey under the Mahoning sign.  At first, I was worried that the little pup might get scared when he saw me wearing the mask, but it didn't phase him one bit.  He just sniffed the rubber a little bit and that was it. 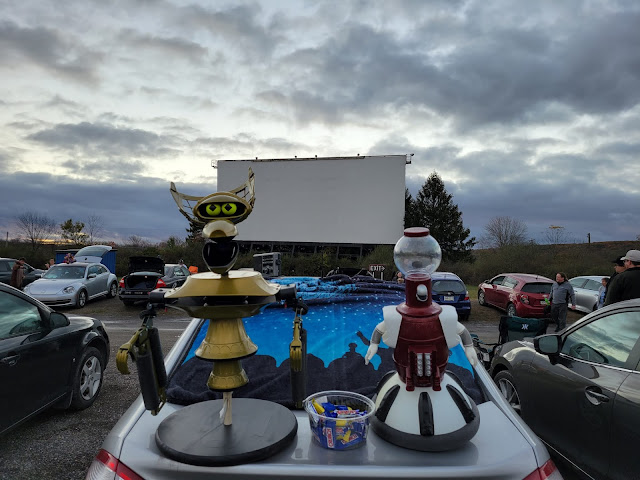 One of the cars that was parked near us on the lot was set up with Crow and Tom Servo from Mystery Science Theater 3000, with a little candy dish for anyone who was trunk-or-treating on the lot. 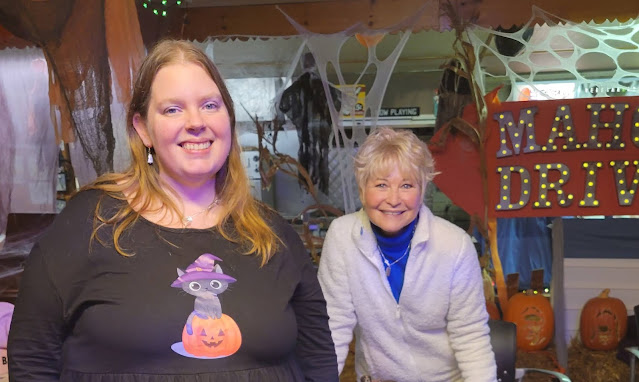 Dee Wallace was in attendance on Halloween night at the drive-in.  She's the star of both movies that were shown (Cujo and The Howling), and has hundreds of major acting credits to her name.  Her first feature film role was playing Nettie The Maid in The Stepford Wives in 1975.  She also plays Lynne Wood in The Hills Have Eyes, which we saw at the Mahoning earlier this year at Weekend Of Terror VI, and was Elliot's mother in one of the biggest Hollywood blockbusters of all time, ET the Extra Terrestrial.  She also has appeared in countless television shows, including Starsky & Hutch, Lou Grant, Taxi, the 80's Twilight Zone, Murder She Wrote, LA Law, Grimm, and Supernatural.
I was wearing a werewolf costume, and we originally thought it would be cute to have a photo taken with Ms. Wallace that included a werewolf (me) and a dog (Harvey) as a nice memory of a Halloween night in which we got to meet her and see two of her movies (about a dog and werewolves).  We stood in line for nearly an hour to meet her and have a picture taken of the four of us, but it didn't work out that way.  When we finally got close enough to the front door to see the table where Ms. Wallace was set up to sign autographs and meet with fans, the person in charge of the Mighty Mahoning Merch Tent told me that I would not be allowed into the building with a dog, despite the fact that we watched at least two other people enter with their dogs for a photo op.  I love my little pup very much, and I wasn't about to let him sit in the car by himself, so I told Angie to go on ahead and I'd meet her back at the car.  She had been looking forward to meeting Ms. Wallace ever since it was first announced that she would be in attendance, so there was no way in the world I was going to let anything keep her from that experience.
Angie told me that Ms. Wallace was incredibly sweet and kind.  They took a nice photo together inside of the concession building, and she autographed the show poster for us.  When Ms. Wallace asked who she should make the autograph out to, my wife asked that she sign it to Will and Angie.  Ms. Wallace asked "Where is Will?", and Angie said that I was outside with Harvey because they wouldn't allow dogs in.  Ms. Wallace then turned to the person sitting next to her (the same person who told me that Harvey couldn't come in) and asked "why the hell wouldn't you let the dog inside!" which was answered with an unconcerned shrug.  I still love the Mahoning Drive-In Theater, but I won't pretend that I'm not annoyed with the situation  I guess it is what it is. 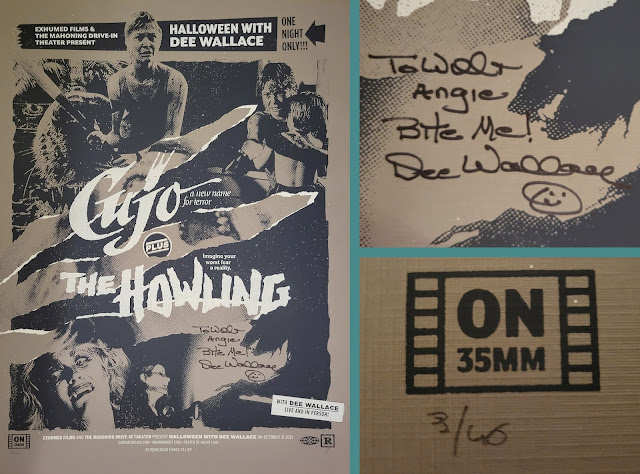 This is the poster from the show that Ms. Wallace signed for us.  It was being sold at the Exhumed Films merchandise table.  It's much larger and significantly more expensive than the average show poster at the Mahoning, but it's very nice and it's great to have this memory of seeing two iconic horror flicks with the star in attendance. 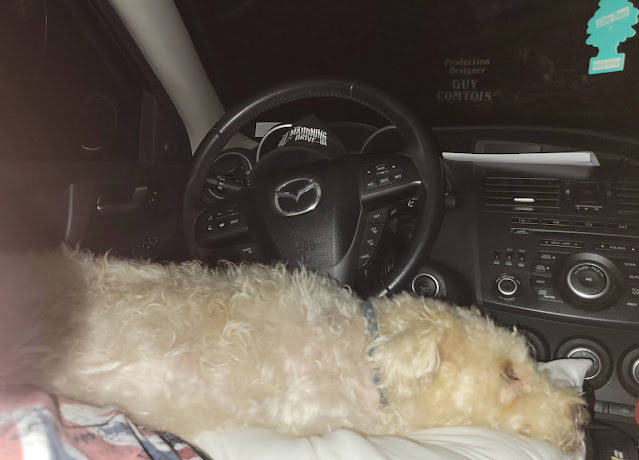 Little Harvey was a good boy, as he always is.  He spent the entire first movie on my lap getting pet and eating snacks.  Not gonna lie, it's a lot easier bringing him out in the summer and on nights when the ground isn't as muddy as it was last night, but he likes to come out with us and he's very well-behaved. 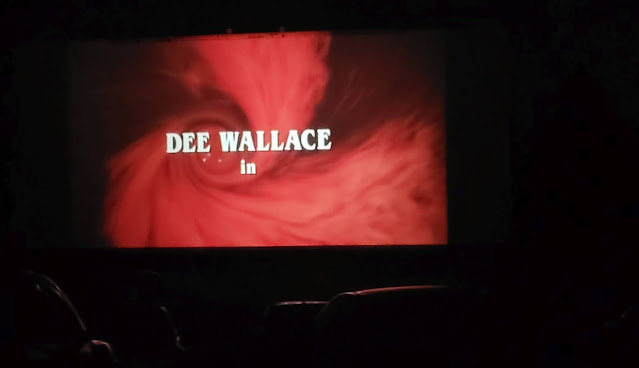 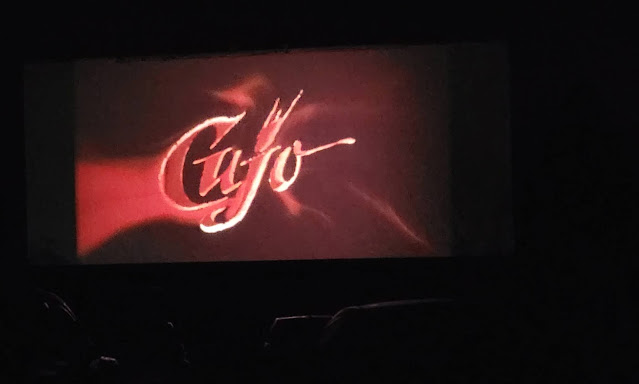 The first movie of the night was a 1983 horror classic based on the 1981 Stephen King novel of the same name: Cujo.  I first saw this movie when I was 19 years old and was working for Blowout Video, a small video rental shop that used to be inside of the Wal-Mart Supercenter in Hazleton.  It's one of the most suspenseful and realistic horror movies I've ever seen because, unlike the slasher flicks, this is a situation that could actually happen to you.  Imagine being in a hot car with a dead battery with no other people around, and you're trapped inside by a rabid dog.  Sure, it's not likely to happen to you, but the odds are a heck of a lot greater than an evil demon with a knife-fingered glove killing you in your dreams.
Maybe this is weird, but I feel bad for Cujo every time I watch this movie.  He's a good boy who just had the bad luck of being bit on the nose by a rabid bat.  He is every bit as much of a victim as the people who he has attacked and killed - perhaps more so.  None of the events that took place in that story are his fault.  The poor boy just wanted to romp in the field and chase bunnies.  He didn't ask for this to happen any more than Donna or Tad.
I'm not sure what it says about me that I sympathize with characters like Frankenstein's Monster and Cujo more than I do the humans in their stories. 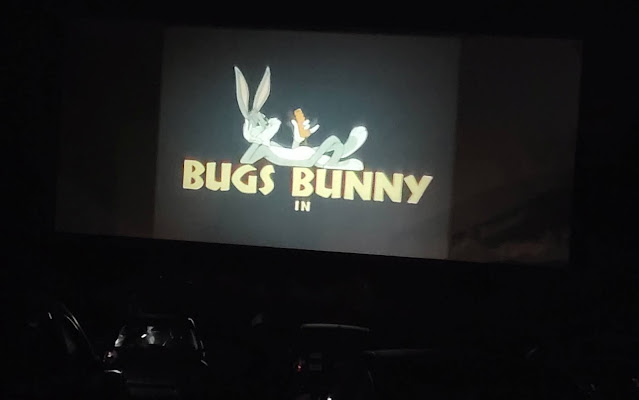 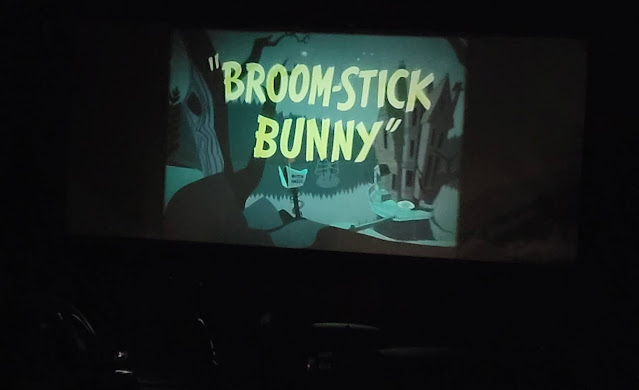 After intermission, Jeff screened a 1956 Chuck Jones cartoon on 35mm that was highly appropriate for the night.  It's called Broom-Stick Bunny, and it stars Bugs Bunny and Witch Hazel.  The story takes place on Halloween night.  Bugs is dressed up at a witch and he meets Witch Hazel when he goes trick-or-treating at her house.  At first, she's jealous over the fact that Bugs (in his witch mask) is uglier than she is, so she attempts to poison him with a magic potion that will make him beautiful.  However, when she learns that he is a rabbit in disguise, she decides that she needs to capture him to use as one of the ingredients in her witches brew.
This cartoon is famous for being the first appearance of one of my favorite entertainers of all-time in a Warner Bros cartoon: the great June Foray.  She passed away in July 2017, just a couple months before she would have turned 100 years old.  I'll always know her best as the voice of Rocky the Flying Squirrel and Natasha Fatale in Rocky & Bullwinkle, but she has been the voice of literally hundreds of cartoon characters in her long and distinguished career.  Whether you grew up in the 50's, 60's, 70's, 80's, 90's or the 2000's, if you watched cartoons, you have heard Ms. Foray's voice a thousand times in your life, and if you go back and watch them as an adult, you might find yourself channeling the spirit of her favorite character, Rocky, and asking yourself the question "That voice... where have I heard that voice before?"  She went on to work in Warner Bros cartoons for the next 58 years after voicing Witch Hazel in this cartoon from 1956.  It was truly a privilege to get to see it screened from it's original 35mm print here at the drive-in. 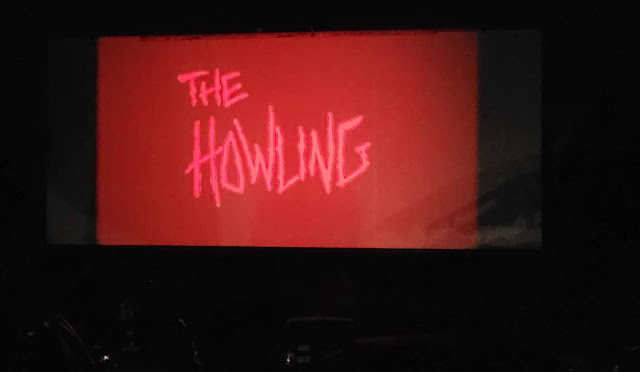 The second movie of the night, and the final movie of the 2021 season at the Mahoning Drive-In Theater was the 1981 horror, The Howling.  I've never watched it before now.  In fact, I'm embarrassed to say that I hadn't even heard anything about it, but that can be a good thing - especially when I get to see a classic film for the first time at the drive-in with through fresh eyes.
It's a bit of a slow burn, but it's a damn good horror movie.  It stars Dee Wallace as Karen White, a news anchor who goes undercover to catch a serial killer.  The meeting leaves her traumatized and unsure of what she saw, which prompts her therapist to send she and her husband Bill to a private resort called The Colony to recuperate.  As you might have guessed, The Colony is not what it appears to be on the surface.
I don't want to say any more about it at the risk of spoiling it for anyone who hasn't seen it, but I will say that it has one of the best endings I have ever seen in a horror movie.  It sort of reminded me a bit of the ending of They Live and The Truman Show for the way it depicts television and society.  That's not to say that the plot of The Howling is anything like either of those films, but the final minutes of each of the three of them had a similar vibe. 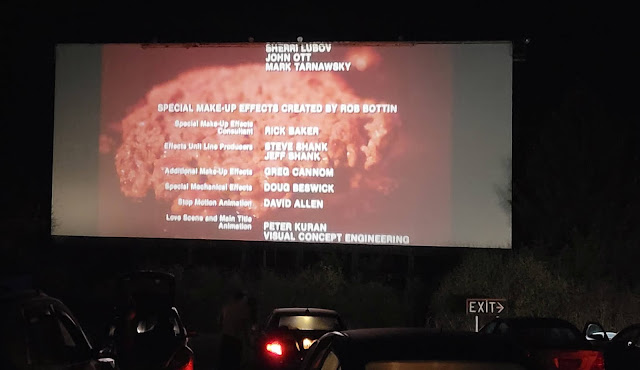 The entire closing credits of The Howling have a close-up shot of a hamburger being grilled, which made me ravenously hungry for a big, thick cheeseburger as we left the drive-in.  If this were the 90's or early 2000's, there would be at least a dozen different places that are still open at 1:00 am to get a hamburger, but things have changed a lot since then.  The only place we could find that was still open was Sheetz, which we don't really go anywhere near on the drive home from the Mahoning, so we decided to put off hamburgers for a little while. 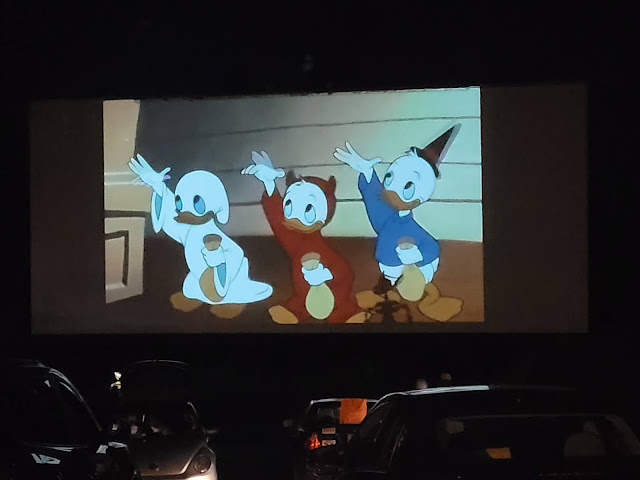 And that's a wrap on the 2021 season at the Mahoning Drive-In Theater.  We have been to 42 different events and got to see nearly 80 movies at the drive-in this year, and I treasure every last moment of it.  I'm very grateful to both the staff at the Mahoning and Exhumed Films for bringing us so many fun nights this year, and to Joe Bob and Darcy for introducing us to this place.  Assuming everything goes according to plan and they open on the last weekend of April, there are approximately 180 days until the start of the 2022 drive-in season, but who's counting.  😉