Admire As Much As You Can


Van Gogh: The Immersive Experience
Tower Theater - Upper Darby, PA
We originally had tickets to see this exhibition on Halloween, but it got crossed up with our plans to go to the Mahoning Drive-In for Dee Wallace Night.  As luck would have it, my dad had tickets to the same show for the Sunday before Thanksgiving, so we just swapped tickets. 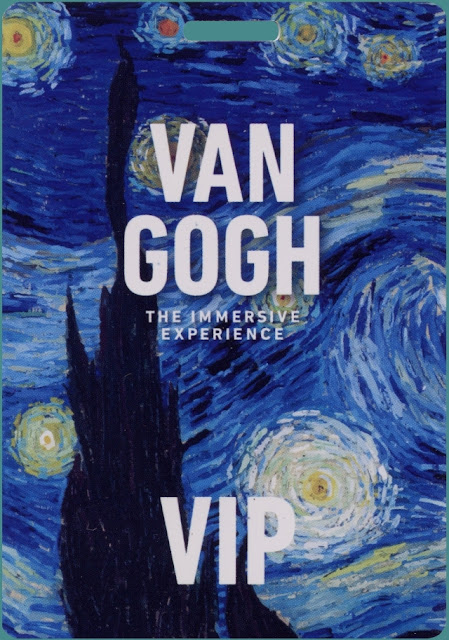 We got the VIP package, which includes a VR experience at the end of the exhibit and a poster print of The Starry Night from the gift shop.  We also got to skip the line, which was pretty cool since they were doing timed entries due to the Covid pandemic. 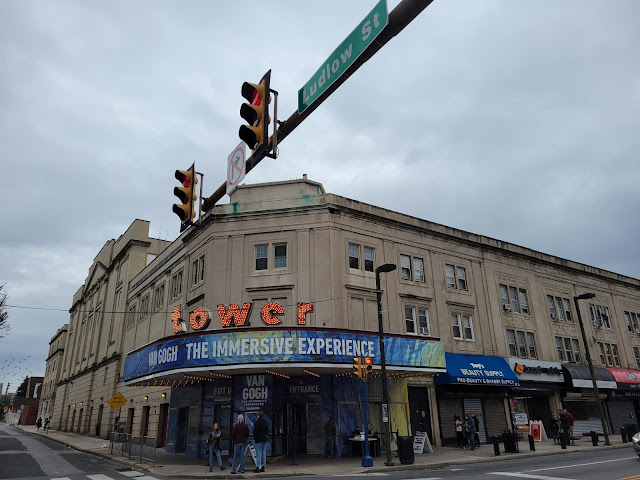 Van Gogh: The Immersive Experience is being held in cities all over the world.  It has already finished its run in Brussels, Linz, Naples, Tel Aviv, Beijing, Hangzhou and Holon, and is currently being exhibited in New York, Boston, Houston, Miami, Seattle, London and Berlin, among other places.  Locally, it's being shown at the historic Tower Theater in Upper Darby, just outside of Philadelphia. 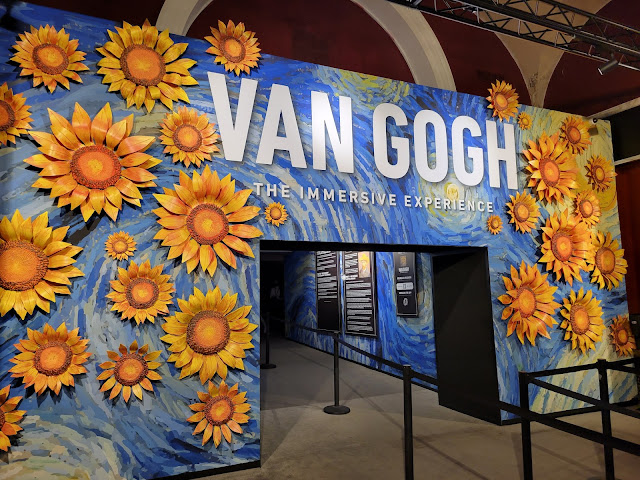 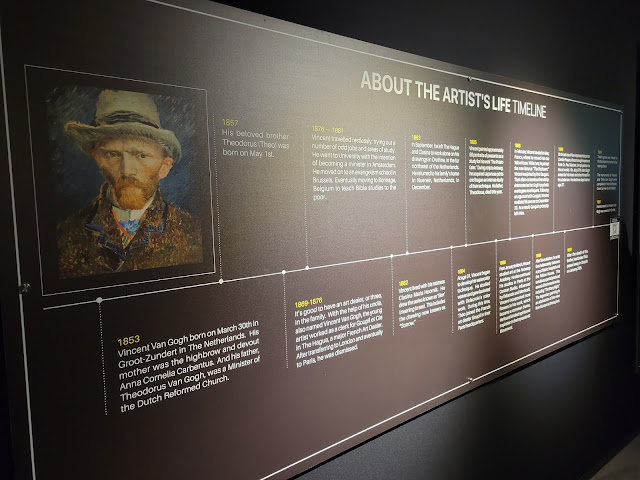 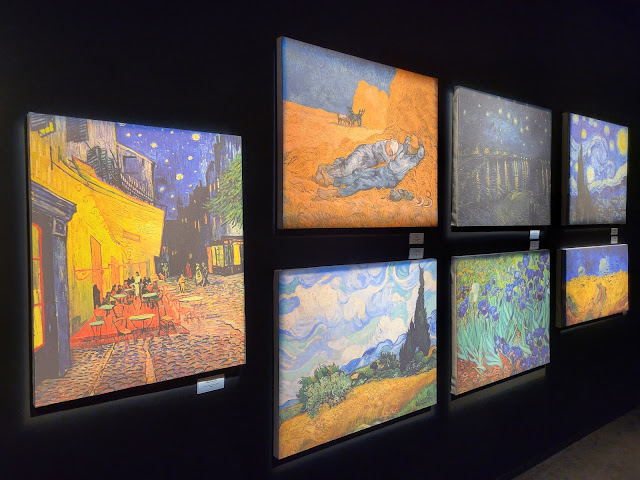 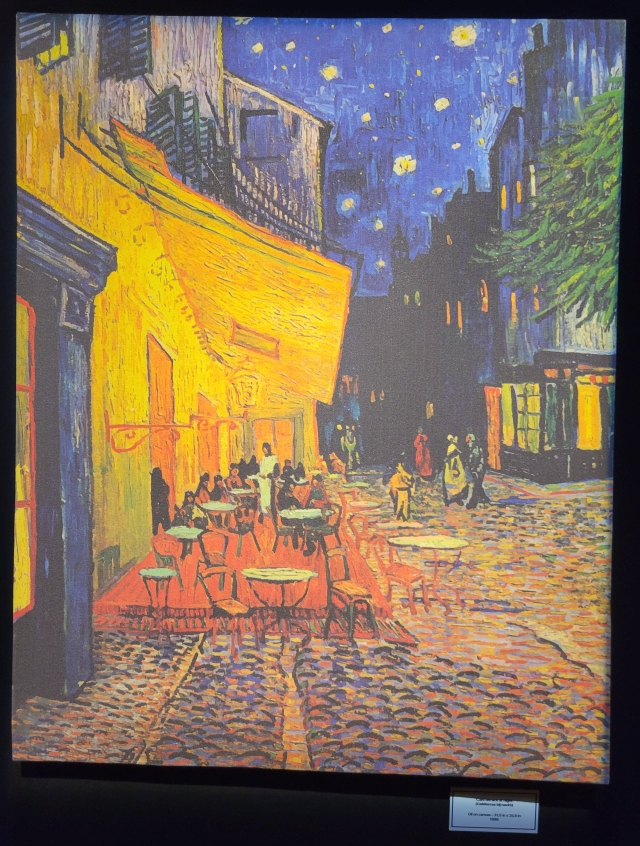 There were several rooms with displays, including a timeline of the life of Vincent Van Gogh, facts about his art, and lit displays of many of his most famous works.  These included my favorite of his paintings, Cafe Terrace At Night, which he finished in 1888.  There was also an app that you could download and use as you were going through the exhibition, but I couldn't get it to work on my phone.
It was pretty crowded, and the lighting made it difficult to take pictures without a reflection (especially for the written displays), but it was very nicely put together and a lot of fun to walk through.

This is a moment where I really wish I had headphones.  It was a beautiful three dimensional display of a vase with Van Gogh's artwork projected onto it, with peaceful music playing.  It was sort of nestled down a short, dark hallway with benches on the left and right hand side where you could sit and get lost for a while.  Well, you could have if not for the nonstop conversation from random strangers.  I get it.  This display is for everyone, and folks have the right to chit chat with each other, but I really do wish I could have sat here by myself for a little while. 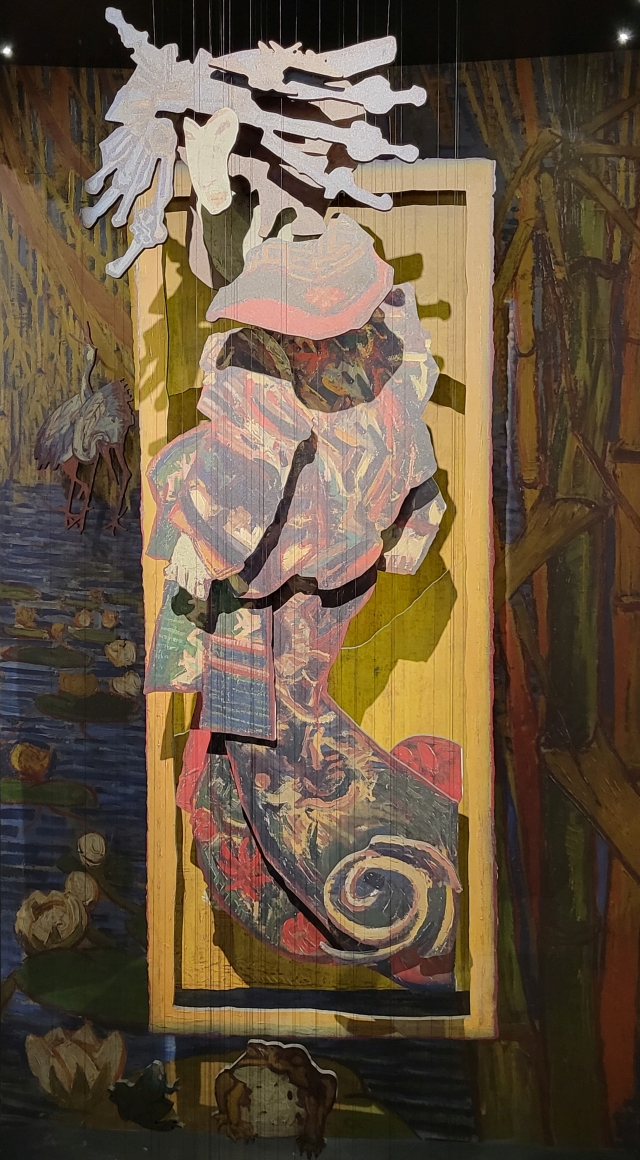 This display was the centerpiece of the display that showed the influence that Japanese artwork had on Van Gogh's own work.  He never had the opportunity to travel to Japan in his short life, but in letters to his brother Theo, he admired the Ukiyo-e woodblock paintings.  Many of his works blend elements of this style with his own. 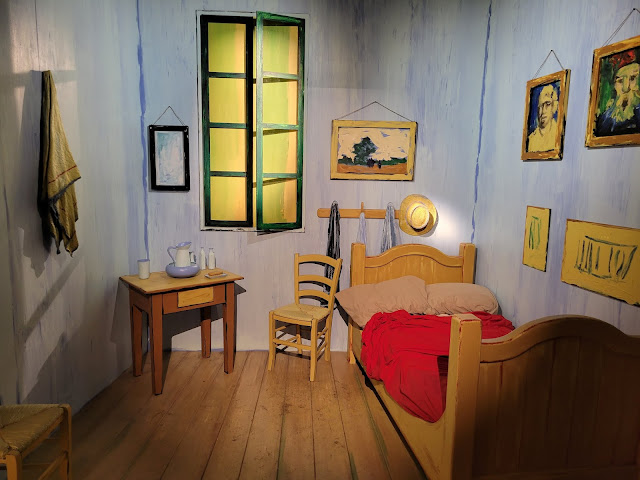 There was a three dimensional walk-in display of the three paintings that Van Gogh did of his bedroom.  This reminded me a lot of the Seward Johnson work that we saw at Grounds For Sculpture earlier this year. 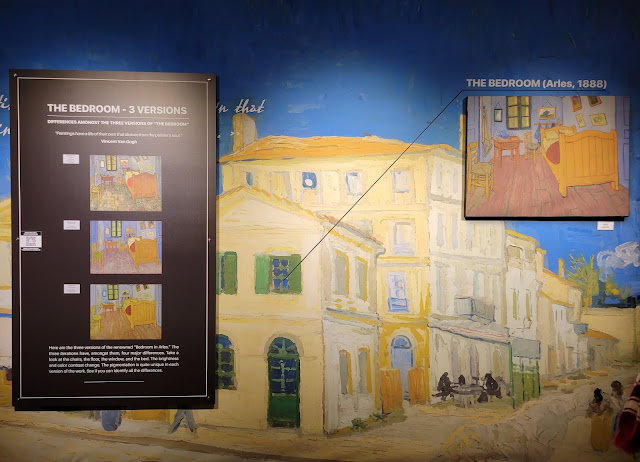 The exhibit had a display that puts The Bedroom paintings into context.  Van Gogh lived in this room at 2 Place Lamartine in Arles, Bouches-du-Rhône in the South of France from 1888 - 1889, so when you look at these three works, you are seeing, through the artists eyes, the place where Van Gogh slept in the years that they were painted. 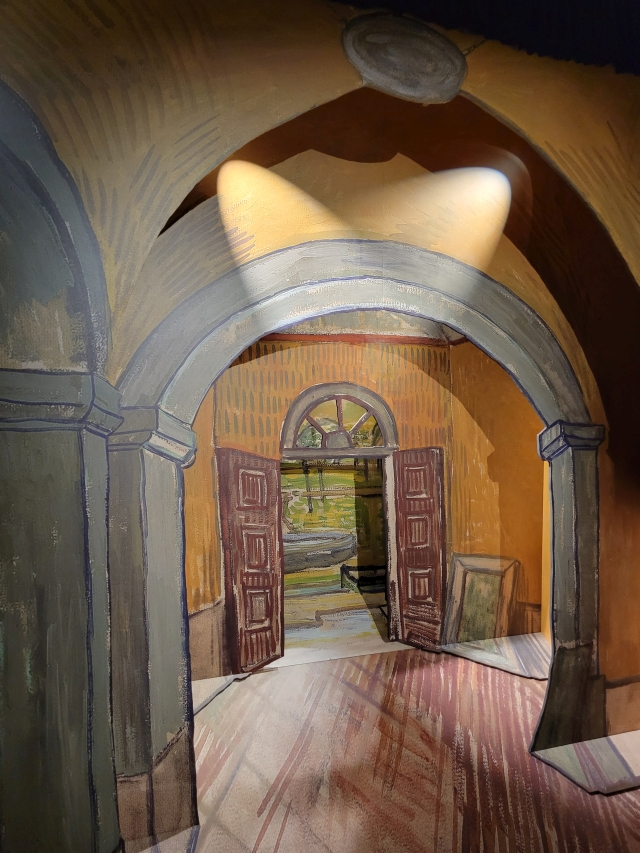 On May 8th, 1889, Van Gogh committed himself to the Saint Paul de Mausole asylum.  He had a studio space at the asylum where he finished 150 paintings and nearly 100 drawings in a single year.  Many of these works are of the asylum itself, including the entrance hall, which he painted in 1889.  It was represented at the exposition by a three dimensional display.  It wasn't quite as deep as the one of The Bedroom, but definitely very cool. 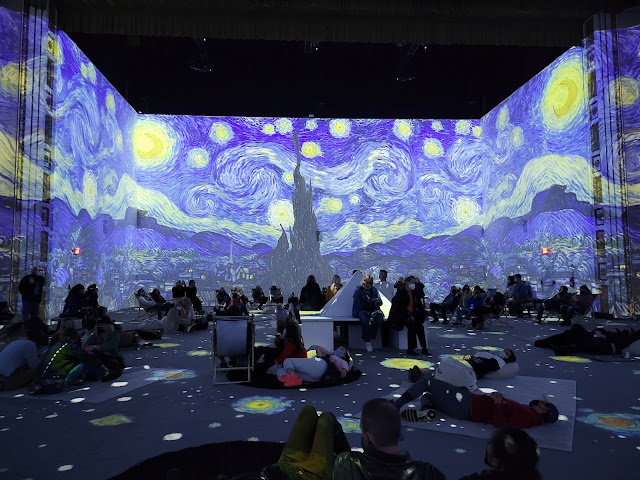 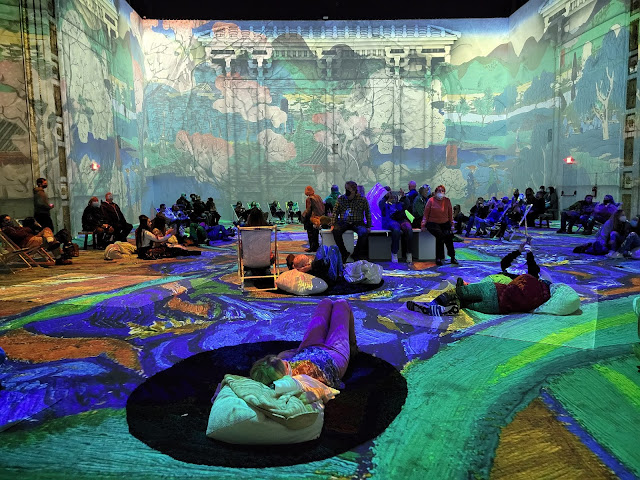 The main event of Van Gogh: The Immersive Experience was a large sitting room with high definition projectors on all sides of the room.  It really is something that has to be experienced because a written description or a photo isn't going to do justice to how incredible it feels to lay back and surround yourself with the works of Vincent Van Gogh.  The projections have animated parts of his work and added voiceovers from letters that the artist wrote to his brother.
We stayed in this room for a long time.  I took a few video clips and stitched them together to a single file.

The video really doesn't capture how amazing this display is.  If you have the opportunity to see this exhibit in a city near you, please do so.  It's not very expensive, and it's definitely an experience worth having. 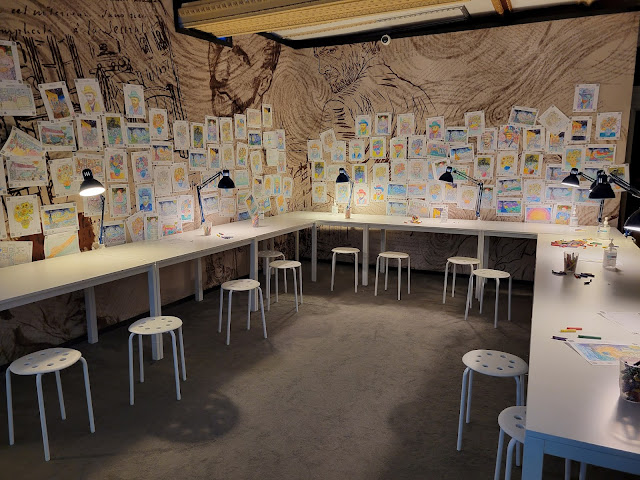 The next room in the exhibition was a studio area with pages to color your own Vincent Van Gogh masterpiece and share it with other art lovers. 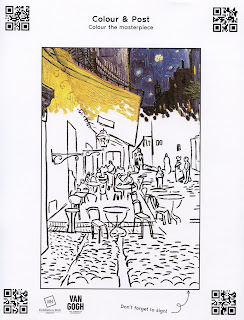 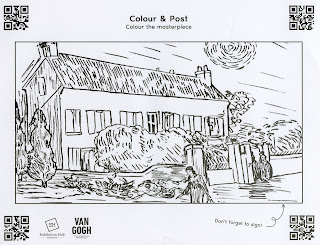 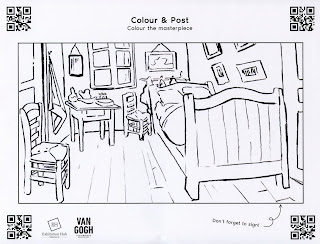 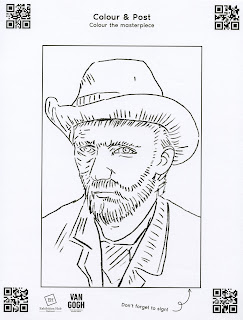 I've scanned four of the coloring pages from the exhibit, just in case someone happens to stumble on this page who wasn't able to make it to the exhibit before it closes, or if it never runs in their area.  There were many more available, so if you go, you'll find a lot more than these.
Click on one of the images above to load a full size jpeg to print and color. 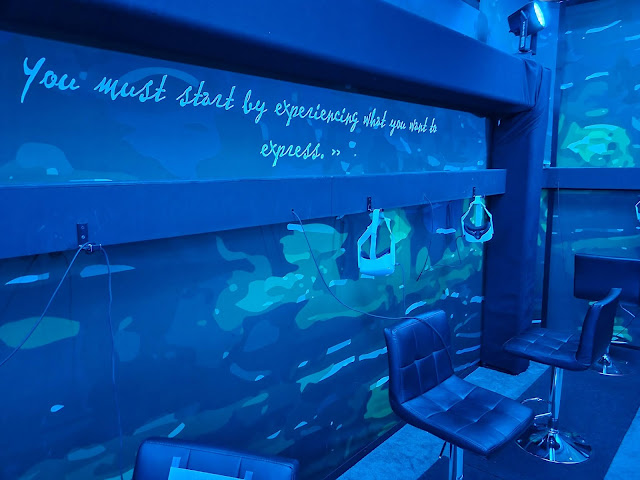 Last, but not least, there was a virtual reality experience at the end of the exhibition.  It's included if you get the VIP tickets, but it cost five dollars if you didn't, but it's definitely worth five bucks.  I fully acknowledge that I sound like an old man when it comes to VR, but this technology truly is amazing.  When I was growing up, the two things that pop culture always promised that the future would bring to us is virtual reality and flying cars.  While I don't expect flying cars any time soon, VR is just a few small steps away from creating high definition virtual worlds that are visually indistinguishable from the outside world.
The Van Gogh virtual experience was like walking through an animated world that resembled his paintings, with stops along the way of places and things that inspired his works, with the painting shown alongside these locations.  There was a narration that made it feel like Van Gogh himself was taking you through a tour of a part of his life, starting and ending at his bedroom. 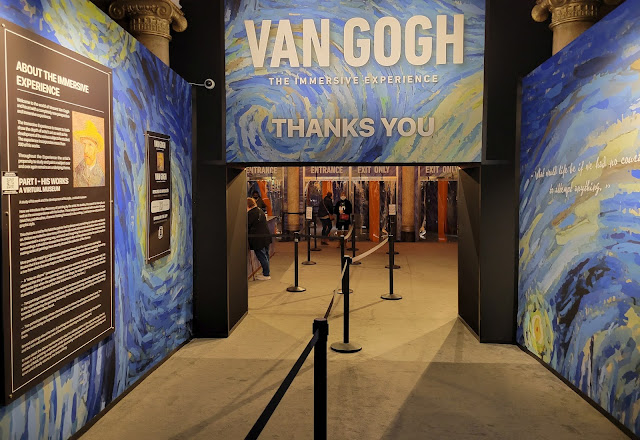 The only thing that's a little tricky about coming to the Philadelphia exhibition is parking.  I'm not sure if The Tower Theater has a parking lot, but I couldn't find it if it does.  We just parked on the street about a block up from the theater.  The parking meters have a two hour time limit, so bring quarters and be ready to run out to your car if you need to feed the meter part way through the exhibit.