She's More Than Pac-Man With A Bow 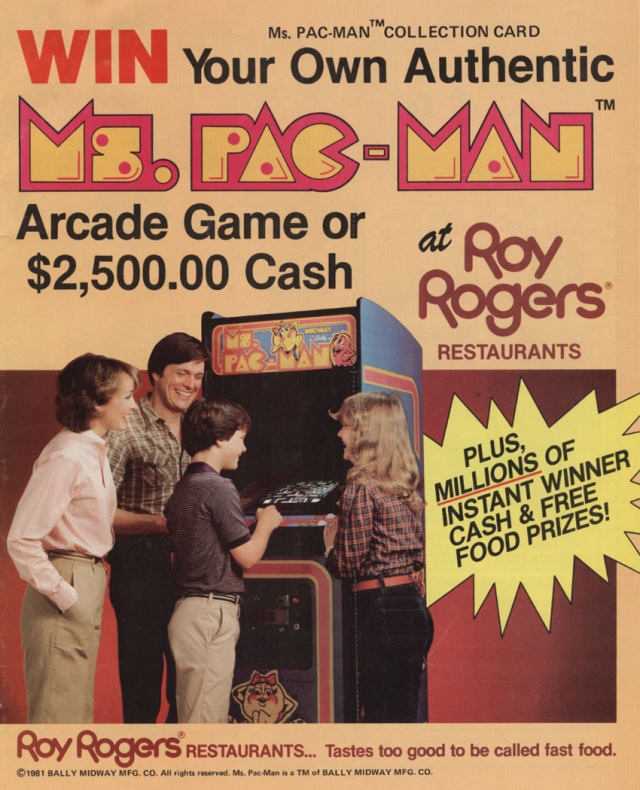 Ms. Pac Man Promotion
Roy Rogers (1982)
It's difficult to pin down an exact release date for video games in the 80's.  This is especially true for arcade machines.  Case in point, the Bally Midway coin-op classic, Ms Pac-Man.  The US Copyright Office has the official publication of the game listed as January 13th, 1982 - forty years ago today.  However, according to an article in the Los Angeles Times that was published a few weeks later, Ms. Pac Man debuted on February 3rd at a press conference in Sherman Oaks and the game was still a few weeks away from being available to play in arcades.  Complicating the issue further is the fact that more than a few respected sources, including Game Informer and the Official Pac-Man Website (run by Namco, who have owned the licensing rights to Ms. Pac Man since 1984) list the game as having debuted toward the end of 1981.
Even with a time machine, it would be extremely difficult to pinpoint the exact date that a paying customer first put a quarter into a Ms. Pac-Man machine, but for the lack of a more accurate date, I'm going to go ahead and wish the First Lady of Video Games a happy 40th birthday today. 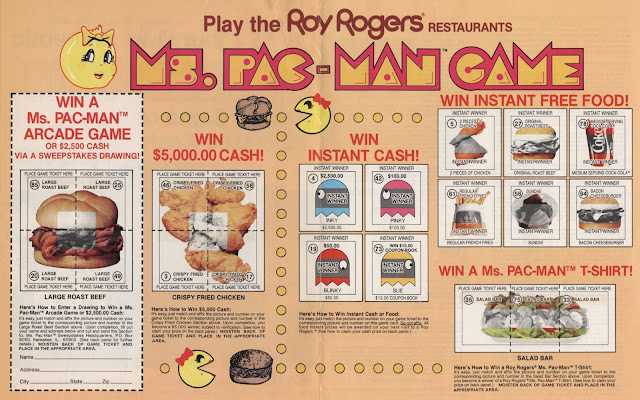 One thing I can give the exact dates on (thanks to the contest's official rules) is this Ms. Pac Man promotion from Roy Rogers, which ran from June 14th to September 30th, 1982.  Customers of the restaurant chain were given a game ticket.  It worked a bit like the McDonald's Monopoly promotion in that customers had to collect multiple tickets in a single category for a prize.  For example, a complete set of three Salad Bar tickets could be exchanged for a Ms. Pac-Man t-shirt.  A set of Crispy Fried Chicken game pieces could be redeemed for a cash prize.  There were also instant win game pieces that awarded prizes, including free food items, a coupon booklet, and up to $2,500 in cash.
The grand prize was a bit more difficult to win.  If you collected all four Large Roast Beef Sandwich tickets, you could mail them in for an entry in a sweepstakes to win an authentic Ms. Pac-Man arcade machine.  The restaurant gave out 25 of them, and I could only imagine how awesome Christmas 1982 would have been for those families that had won their very own cabinet of the hottest video game of the year straight from the arcade.
This contest was a little before my time.  I was only two years old for most of its run, but even if I was older, we didn't have a Roy Rogers in town.  To this day, the closest one that I'm aware of is at the Allentown Rest Stop off of the turnpike, so their sandwiches have become my go-to snack for the drive home from Philadelphia.  Despite this, my childhood memories of Ms. Pac Man are closely tied to a restaurant.
When I was growing up, I spent a lot of weekends at my grandparents house.  On Saturday, Grandma, Nana and I went to services at Our Lady Of Mount Carmel in Hazleton.  It was the first and only Tyrolean Roman Catholic Church in the United States, and is probably the reason why my Nana's side of the family settled in Hazleton when they emigrated from Tyrol to the New World.  My grandfather was Lutheran, so he didn't go to church with us.  He would go visit his mother and then come back to pick us up when services were over, and then the four of us stopped at the Blue Comet for dinner.
You can't see it in this photo, but there were stairs on the right side of the building that led to the front door of the restaurant.  There was a small vestibule when you walked into the building, and once you were inside, there was a second set of doors on the right that led to the dining room.  That vestibule had a small coat rack, a pay phone, a couple of video poker machines, and a Ms. Pac-Man arcade machine.  The game was in the center of the back wall facing out, so that it was the first thing I saw when we walked in and the last thing I saw before we left.  After I was finished eating, my grandfather gave me a couple of quarters and I'd go out and play Ms. Pac-Man.  When they finished their coffee after dinner, they'd usually join me and play poker for a little while.  Like most of the video poker machines in town, the ones at the Blue Comet "paid out" the same as they would at a casino (very illegal, but it's a Hazleton thing).
This is how I spent literally hundreds of Saturdays through the 80's and early 90's until I moved to South Florida.  I know it probably seems a bit silly or even stupid to reminisce about something as ordinary as playing a video game at a diner that's been sitting abandoned for over ten years, but these are memories that I treasure.  The closest I can get to experiencing them today is a game of Ms. Pac-Man.  When I play it on an arcade unit, I can almost smell the mixture of cigarette smoke, coffee and diner food that permeated this place and I usually don't get very far on my first quarter.  Seems like something always gets stuck in my eyes. 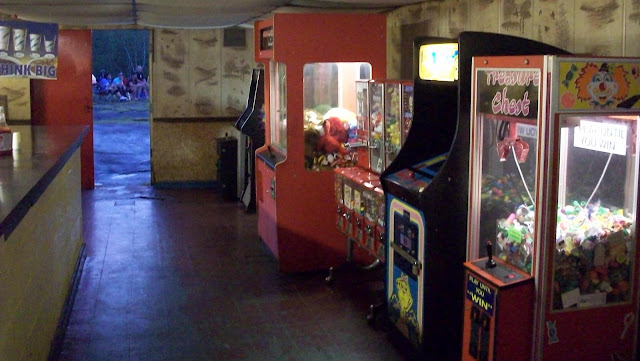 The other spot in Hazleton where I played Ms. Pac-Man was the Laurel Drive-In.  Coincidentally, this was also on Route 309, but a few miles down the road from the church in the opposite direction of the Blue Comet.  It closed a few years ago when studios went all digital and stopped producing movies on 35mm.  This is the theater where I saw my first movie on the big screen, and I became a frequent customer from my late teens straight through until they closed.
Before it closed, the snack bar had a row of arcade games on the wall opposite to the counter.  Most of them were crane machines with candy or stuffed animals, but they did have a Ms. Pac-Man machine.  My family used to sneak in their own snacks so I don't ever remember going into the snack bar when I was a child, but I became very familiar with it as a teenager.  Cheap pizza, movies and Ms. Pac-Man... it was heaven for a 17 year old nerd! 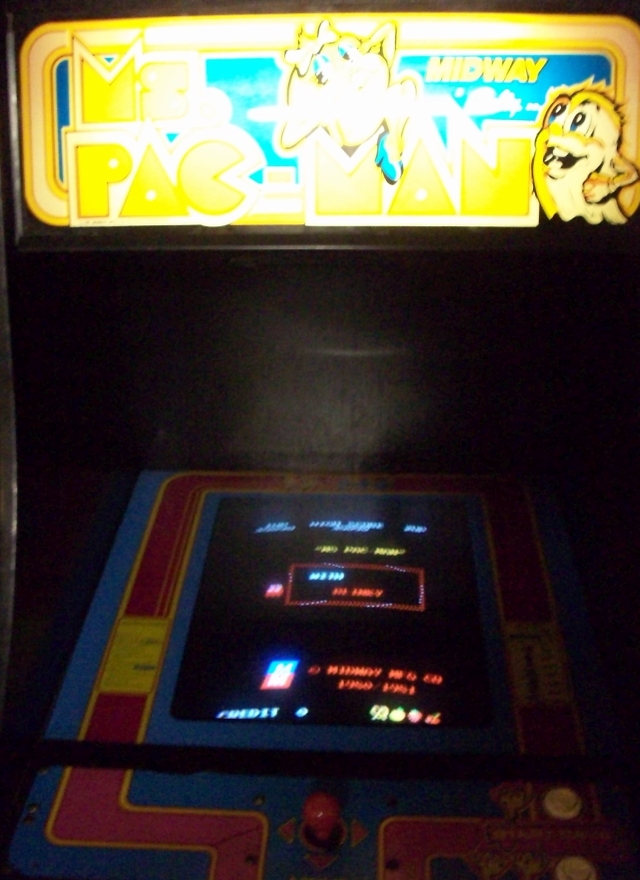 There are still retro themed arcades across the country, and I'll bet that each of them have a Ms. Pac-Man.  Additionally, Arcade 1Up has made the dream of winning the 1982 Roy Rogers grand prize a reality for a fraction of the cost of the original.  However, the world has changed a lot in the 40 years since Ms. Pac-Man debuted.
In the 80's and early 90's, arcade machines were everywhere.  Grocery stores, convenience stores, gas stations, restaurants, bars, malls, airports, laundromats, bus stops... pretty much every public space you can think of had at least one video game coin-op, and Ms. Pac-Man was among the most successful of them.  There were 125,000 machines sold in the first six years since it was released and they grossed a total of $1.2 billion dollars by 1987... one quarter at a time.  These days, you're not as likely to stumble across an arcade machine out in the wild, but if you do, there's a very good chance that the one you find will be a Ms. Pac-Man.  If that happens, give it a spin.  The true classics never get old.