Who's That Ghost Knocking At My Door 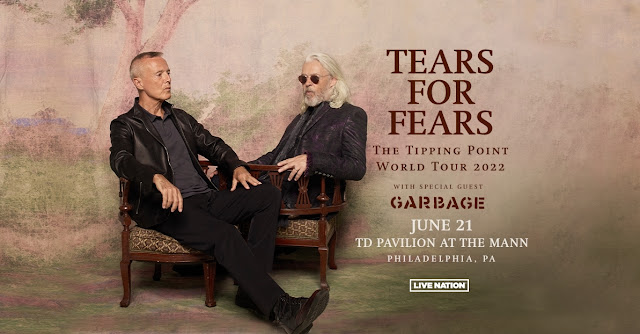 Garbage and Tears For Fears
The Tipping Point World Tour
Mann Center For The Performing Arts - Philadelphia, PA
Tears For Fears released their seventh studio album, The Tipping Point, earlier this year.  It's an excellent record that I had been looking forward to for a long time, but even more than that, I was looking forward to this show.  Both bands are absolutely phenomenal to see live in concert.  We had seen Garbage in concert when they opened for Blondie in 2017, and we saw Tears For Fears twice before.  The first time was in 2010 at the Hammerstein Ballroom in New York, and the last time was in 2017 when they opened for Hall & Oates at the Prudential Center in Newark.  The opportunity to see both of them on this tour was too good to pass up! 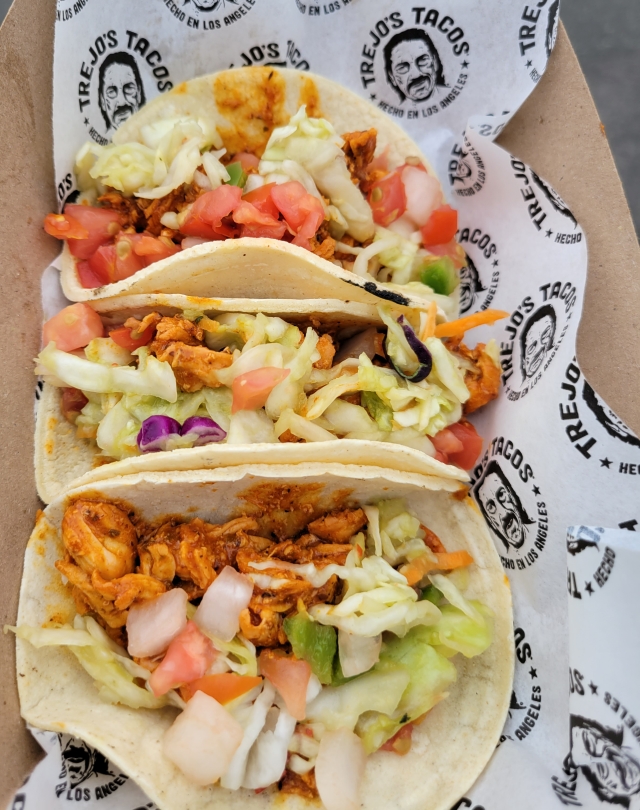 There's a Trejo's Tacos stand at this venue, so I had to pick up a pre-show snack.  They could have done with a little hot sauce, but they were very tasty. 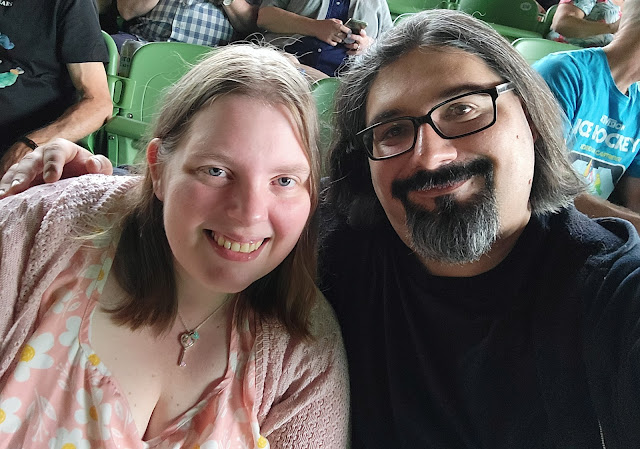 Our seats weren't the crazy expensive ones that were right in front of the stage, but they were still pretty good.  We were in Row BB towards the center of the stage with nothing obstructing our view. 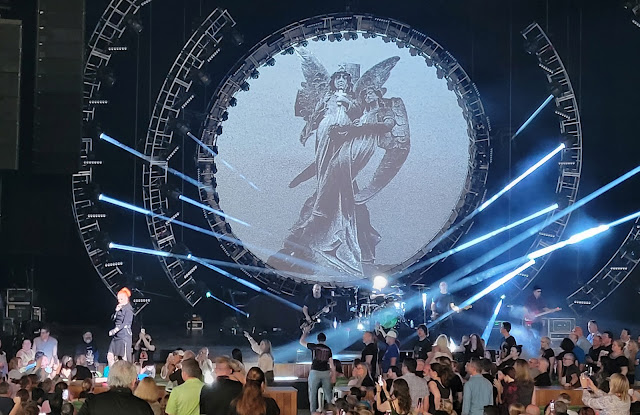 Garbage took the stage at around 7:30 to a recording of Rosemary's Lullaby from the 1968 horror classic Rosemary's Baby, which is a pretty badass way to make an entrance.  They opened with Automatic Systematic Habit off of their 2012 album Not Your Kind Of People.  That was followed up by a song called The Men Who Rule The World, which is off of their latest album, No Gods No Masters, which was released just nine days earlier.  Later in the set, they played another song off of their new album called Wolves.  I haven't heard the new album yet, but if these two songs are any indication, I think I'm going to love it.   I'll definitely spend some time with it this weekend.
Most of Garbage's set came from their first three albums.  They played Stupid Girl, Queer and Only Happy When It Rains from their self-titled debut album (1995), and four songs from their second album from 1998, Version 2.0: Special, Wicked Ways, Push It and their closer for the night, You Look So Fine.  They worked in parts of Personal Jesus (Depeche Mode) into Wicked Ways and Dreams (Fleetwood Mac) into You Look So Fine, and let me tell you, hearing Shirley Manson singing a Stevie Nicks song is a haunting and beautiful experience.
They did two other songs in the middle of the set that are among my favorites: Cherry Lips from their 2001 album Beautiful Garbage, and their 1999 James Bond theme song: The World Is Not Enough.  The band almost skipped over the 007 theme and went straight into Wolves before Shirley stopped them.  She seemed like she was having a lot of fun on stage last night, and she sounds as incredible as the first time I heard her when I was 15 years old. 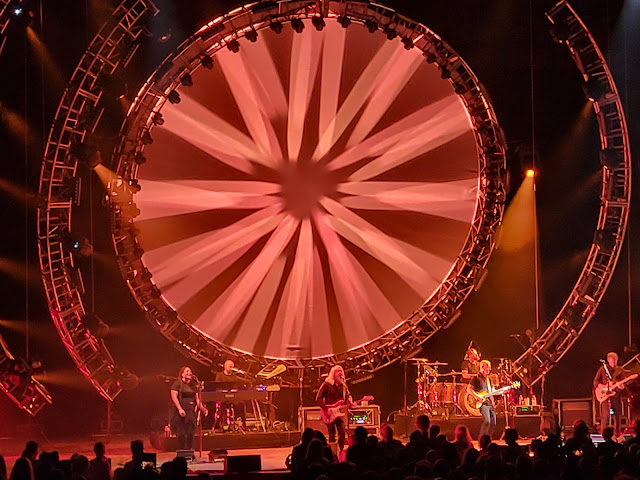 I've been to two other Tears For Fears concerts and this one is my favorite of the three.  The new album is a big part of the reason why.  It's the band's first studio album in nearly 18 years, and it's absolutely amazing.  They started their set with the first two songs from the new album: No Small Thing and the title track, The Tipping Point.  Altogether, they played seven out of the ten songs from the new record, including, Long Long Long Time, Break The Man, My Demons, Rivers Of Mercy and End Of Night.  My Demons is fast becoming one of my favorite Tears For Fears songs. 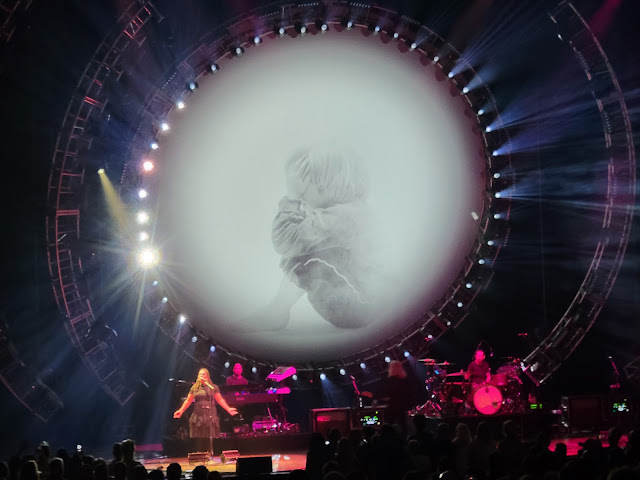 The rest of the 19 song set was a mixture that included many of their biggest hits from as far back as their 1983.  From their debut album, The Hurting, they played Mad World, Pale Shelter, Change and Suffer The Children, the latter of which was beautifully sung by Lauren Evans.  She also sang Woman In Chains with Roland and she sang backup throughout the rest of the show.  I cannot say enough positive things about this incredibly talented woman.  She added a new dimension to songs that I've loved for most of my life.
Speaking of Woman In Chains, they played it and two other songs off of the 1989 The Seeds Of Love album, including the title track and Badman's Song.  They also performed Secret World off of Everybody Loves A Happy Ending, and one of my all-time favorite songs, Break It Down Again off of Elemental. 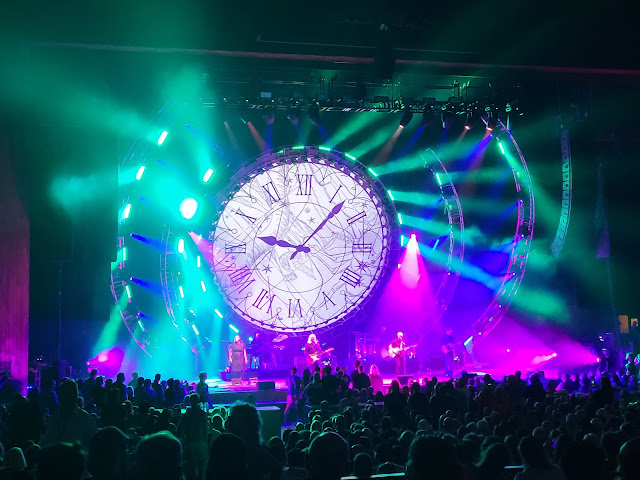 Many of the biggest Tears For Fears hits are from their biggest album and one of the most successful records of the decade, Songs From The Big Chair.  The third song of the night was their #1 hit single from 1985, Everybody Wants To Rule The World.  It's an timeless new wave hit, and they play it with every bit of passion that I saw in records of the shows they performed when I was five years old.  Roland has more energy at 60 than I have at 41, and he belts out the lyrics in a way that is so powerful that is seems effortless.
The closer for the main part of the show before the introductions and encore was Head Over Heels.  It's a song I loved as a kid listening to my parents records when I was coloring.  I fell in love with it all over again when I watched Donnie Darko for the first time.  Again, the crowd went wild.
They performed a three song encore, starting with End Of Night from the new album and Change from their first album before closing out the night with the first song of Songs From The Big Chair - Shout. 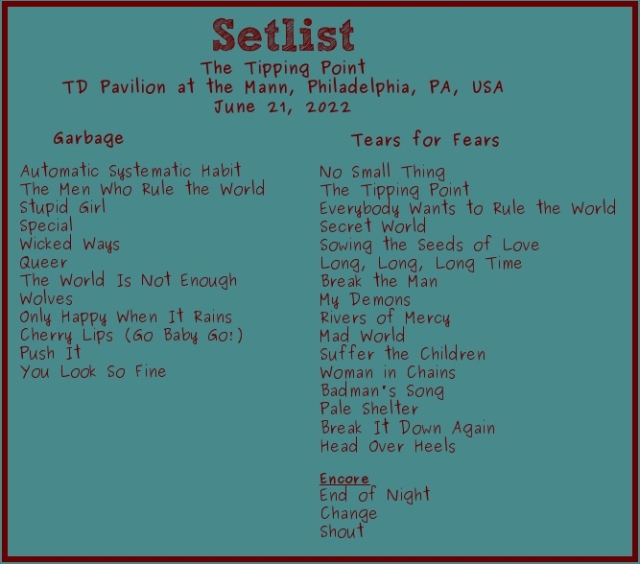 Last night was an unforgettable night of music from two of my favorite bands, and I feel very fortunate to have gotten to experience it.  No matter how much chaos is going on in the world, music always makes things better.