A Night With M. Night 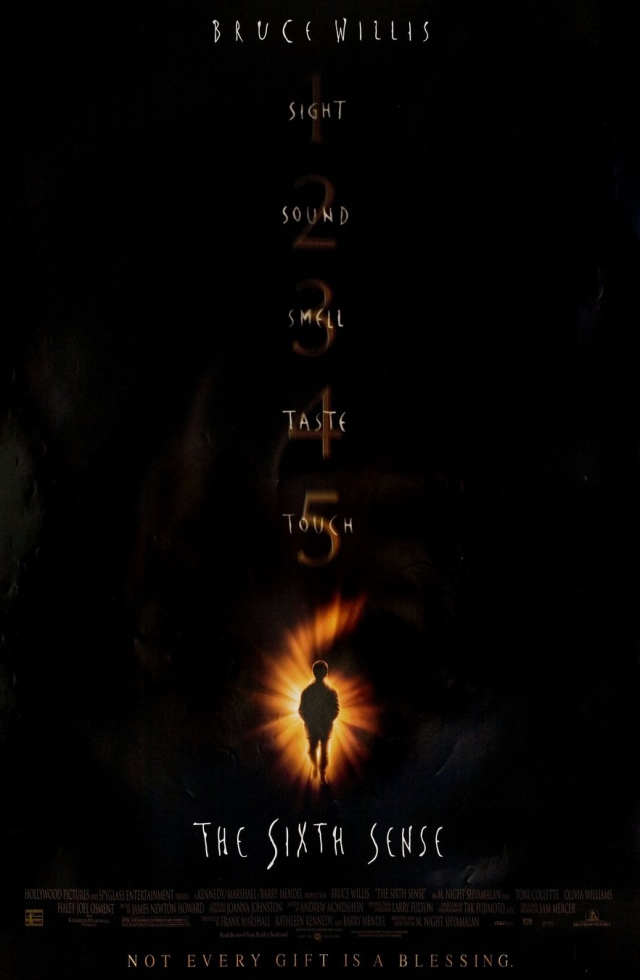 The Sixth Sense
Mahoning Drive-In Theater - Lehighton, PA
One of the things that irritates me about our species as a whole is our willingness to blindly follow trends.  These trends are probably the most noticeable when it comes to fashion and music, but they take many different forms.  Certain expressions go in and out of fashion.  For example, I can't remember when I first heard someone use the phrase "spilling the tea" in place of "gossip", but I thought it was asinine the first time I heard it and I still think it's ridiculous today.  Similarly, throughout the history of pop culture, an album or a movie was "released".  Not anymore... now it "drops", as if they're dumping copies of it out of an airplane.  Over the past ten years, humanity has moved on to meme trends, with hundreds of thousands of copycats all trying to add their own little comedic twist to whatever is being spread around.  After Will Smith slapped Chris Rock, I must have seen a thousand different memes with that picture being spread around and I can't remember a single one of them actually being funny.  I can only imagine how miserable of an experience it would have been if social media existed during the OJ Simpson trial. 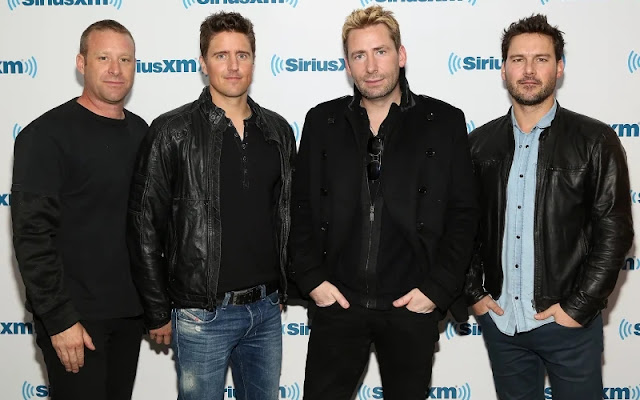 As annoying as these trends can be, nothing gets on my nerves more than seeing lazy opinions get parroted by people who want to fit in.  It usually goes something like this: an entertainer or an artist becomes successful, a few years go by, and then suddenly everybody claims to hate them.  I'm not talking about people being "cancelled" for political opinions or because of a crime they committed.  I'm talking about the entertainers that suddenly get dragged through the mud for no real reason in particular other than for the sake of going along with popular opinion.  The example that comes to my mind first is Nickelback.  I don't really care about that band one way or the other, if I'm being honest.  I don't love them or hate them.  They're ok.  They were just another rock band in the early 2000's, but at some point, it became trendy to hate Nickelback for no specific reason that I've ever been able to discern.  Their music is so ordinary and inoffensive that it's hard to see how anyone could form a strong opinion about it one way or the other, but public opinion just seemed to trend in that direction. 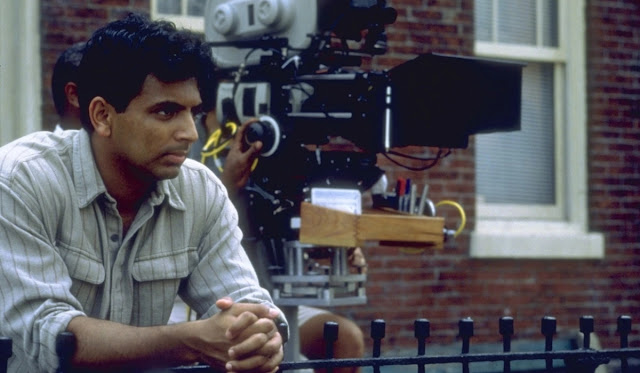 There are many other examples of this, and they often come from the world of comedy (Pauly Shore and Adam Sandler immediately come to mind), but the biggest example I can think of when it comes to film directors is M. Night Shyamalan.  The Sixth Sense was almost universally praised when it premiered in theaters 23 years ago, with Shyamalan being hailed as a brilliant young director who had a bright future.  Most of the films that he made in the years after The Sixth Sense are pretty damn good, including Unbreakable, Signs, The Village, The Happening, The Visit, Split and Glass, but you'd never know it from the reaction his name seems to evoke these days.  The criticism that I've heard as read over the years with regard to Shyamalan have been pretty weak.  I suspect that a great deal of it is coming from people who are just parroting what they've heard other people say. 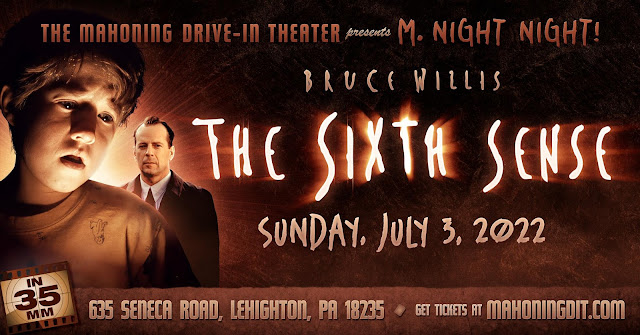 Despite all of this unwarranted criticism, I think it's pretty safe to say that The Sixth Sense is still regarded as one of the greatest psychological thrillers of all time.  It's a movie that absolutely knocked my socks off when I was 19 years old, and the chance to see it again on the big screen is yet another incredible experience that I never thought I'd have. 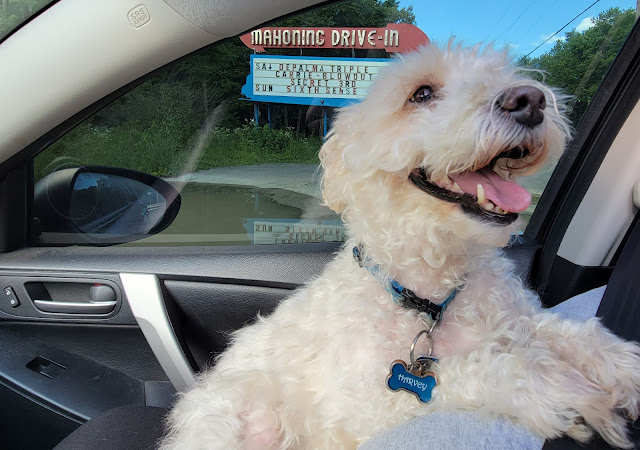 We brought Little Harvey with us to the drive-in last night.  He gets excited when we even say the words "drive-in" around the house.  Just about everybody who walks past stops to say hi and pet the little fellow, and he eats up all the attention.  It's also a huge wide open space for him to take a walk and get some fresh air. 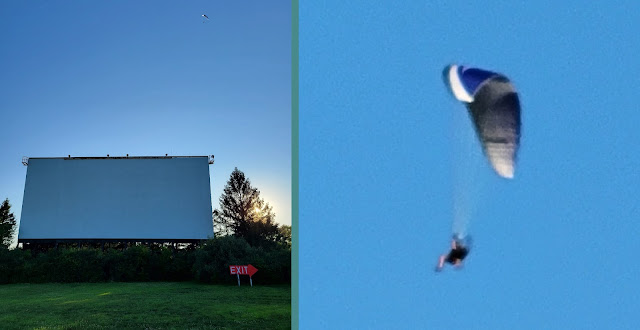 Speaking of fresh air, we saw somebody paragliding over the screen before showtime.  They were getting pretty good height.  I'd love to give this a try sometime, but I think I might need a shot of whiskey first.  That's a long fall if something goes wrong. 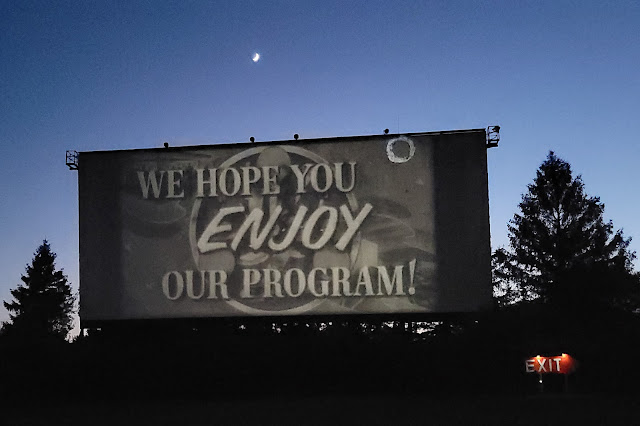 Jeff was manning the projection booth for Sunday night's feature, and he showed one of the old intermission reels from his collection during the pre-show.  I don't think I've seen this one since last August.  It includes advertisements for over a dozen movies from the 50's and 60's, along with an ad for a heater that drive-in theaters used to have attached to their speaker pole which would allow patrons to keep warm during the winter without having to run their car throughout the movie. 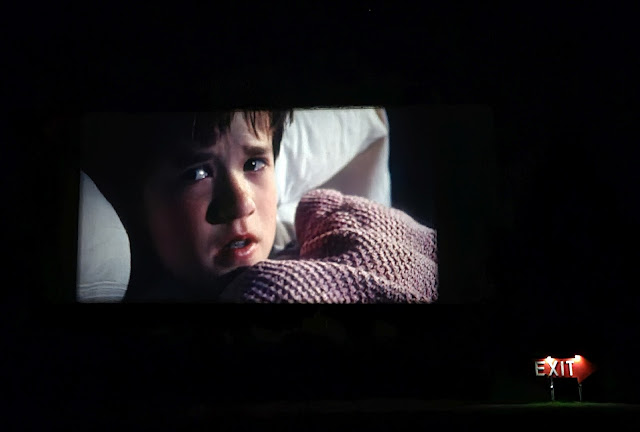 The most incredible thing about The Sixth Sense is that you only get to experience this film once.  After that first time, it becomes an entirely different movie.  You start noticing all sorts of little things flew under your radar, and scenes hit you in a different way after you learn what's been going on all this time.  However, while you can gain a deeper perspective of the film with subsequent viewings, you can never go back.  The way that you saw this movie for the first time is locked in and cannot be duplicated.
Haley Joel Osment delivers the finest performance I have ever seen from a child actor, before or since.  I can't even think of a close second.  You can feel exactly what he's going through at every step in this journey.  Toni Collette performance as his mother is equally amazing, and doesn't get the level of recognition that it deserves.  Her anguish and her feeling of helplessness is painfully realistic.
Unfortunately, the lot didn't seem too full for this one, and I can't for the life of me understand why.  I'm not sure what kind of numbers it did, but I hope that this show did well enough for the Mahoning to consider an M. Night Shyamalan double or triple feature in the future.