I Dream Of Grapefruit Cola

Coca-Cola Dreamworld
Coca-Cola (2022)
The trend of limited edition Coke products with bizarre names is continuing through the end of the summer with their new "dream flavored" cola called Coca-Cola Dreamworld.  Their website describes this flavor as something that "explores the realms of the surreal, the imaginary, and the otherworldly". 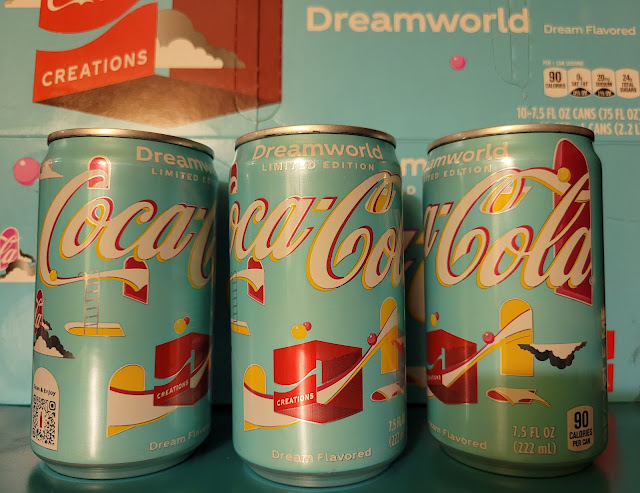 If you can imagine a cola that tastes a bit like grapefruit, you can imagine the surreal and otherworldly qualities of Dreamworld.  I think it tastes better than Marshmello's Coke, but it's not as good as the Starlight flavor that was released earlier this year.  It's definitely worth trying, but it's not the kind of thing that I'm likely to stock up on before the limited edition period is over the way that I did for Starlight.

On a side note, I have the utmost of respect for The Coca-Cola Company for releasing their limited edition products in stores.  There are many companies these days who don't.  Instead, they come up with something unusual or innovative that they share on the internet, only to send special packages out to "influencers" and make everybody else beg for what's left over in a cheap social media contest.  In other words, their brand name gets all of the free publicity from the folks who share pictures of the product and from the news outlets that report on it, but they take none of the risk involved with producing the product on a large scale and shipping it out to stores so that everyone can have an opportunity to try it.  Companies that take this approach tell me two things: they don't have faith that the product is good enough to sell, and they lack respect for their consumers.  Kudos to Coca-Cola for being better than that.