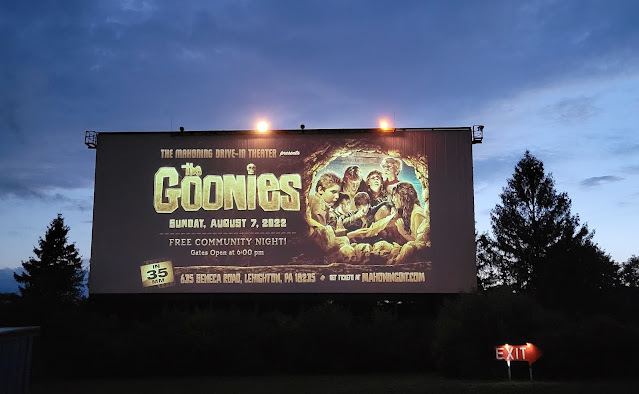 The Goonies
Mahoning Drive-In Theater - Lehighton, PA
Last August, the Mahoning screened Jurassic Park as a community event with free admission to all who requested a ticket in advance.  It was an excellent night, and one that I'm sure introduced a lot of new folks to the drive-in.  Last night, they have done the same thing with one of my favorite movies of all time: The Goonies. 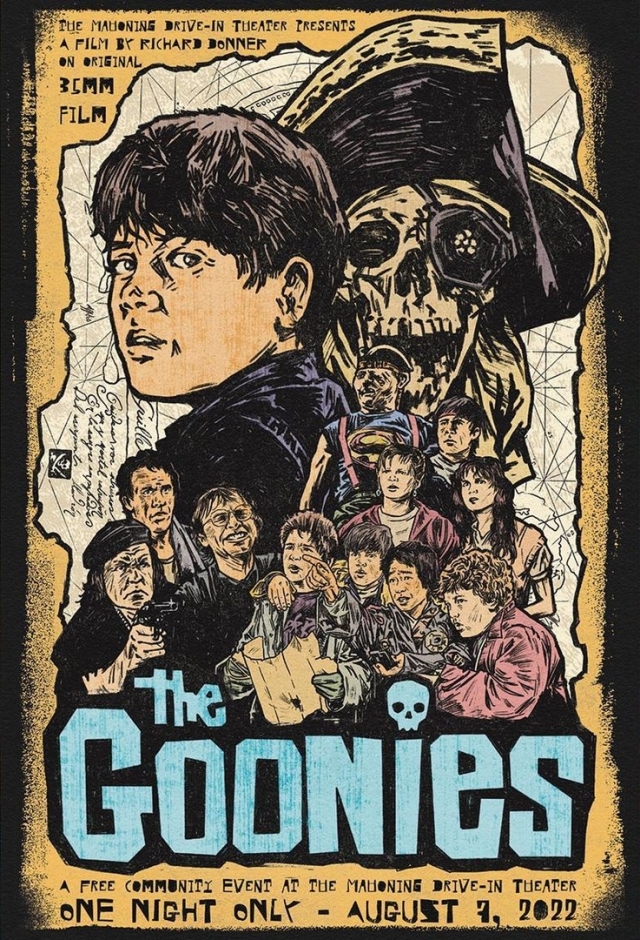 The poster for this show was designed by Tom Bifulco.  I've lost count of how many awesome posters he has designed since we started going to the Mahoning, but it's been quite a few.  Just out of the shows that we've been to this season alone, he created the posters for The Blair Witch Project, De Palma-Rama, The Night Of The Hunter, Enter The Dragon, The Sing-Along Weekend, and the Remake Double-Take double feature of The Fly.  I'm no artist, but that strikes me as a hell of a lot of work! 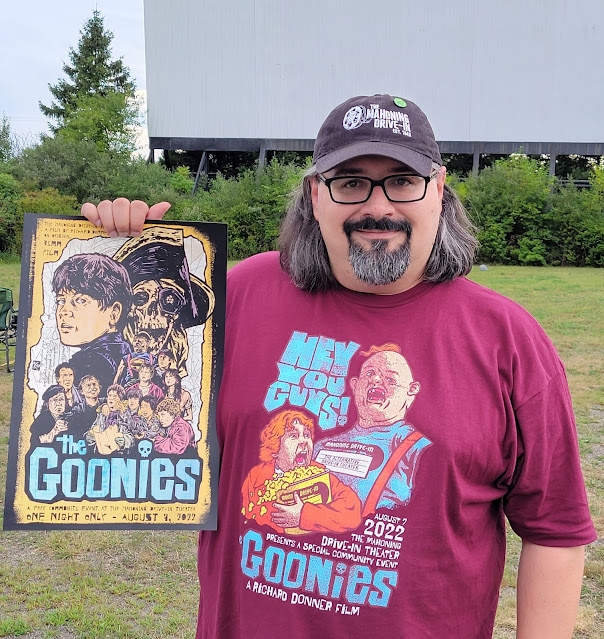 Mr. Bifulco also has designed a t-shirt for this event.  It was available in multiple colors, and one of those was a combination of baby blue on maroon that had a very retro Phillies vibe.  There is no way I could pass on Sloth wearing the Mahoning t-shirt with Chunk holding an overflowing Popper bucket! 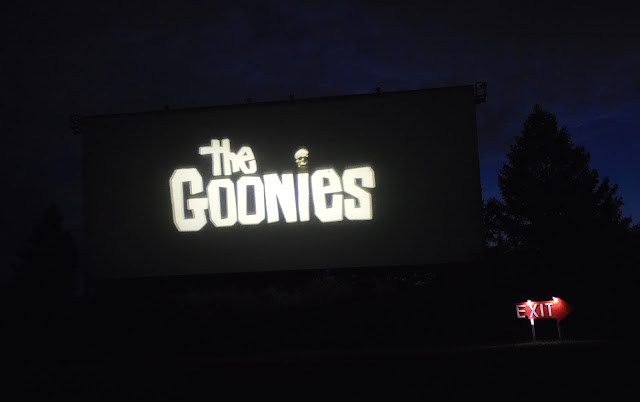 There are few things that capture the feeling of being a kid in the 80's like The Goonies.  It's one of my favorite movies ever made, but my fandom pales in comparison to my wife.  She knows every word of this film.  She knows every piece of trivia about how it was made, and the deleted scenes, and the things discussed in the director and cast commentary from the DVD.  She is a walking Goonies encyclopedia.  There's rarely a day that goes by that one of us doesn't make a Goonies reference to the other in conversation.  Sometimes, she's giving me driving directions by quoting Ma Fratelli ("stay to the right").  Sometimes, it's me randomly finding excuses to say "lowest point nothin', Mikey" or referring to something as a "retropackum", or threatening to "commit Hare Krishna".  It happens so often that we barely even notice that we're doing it anymore. 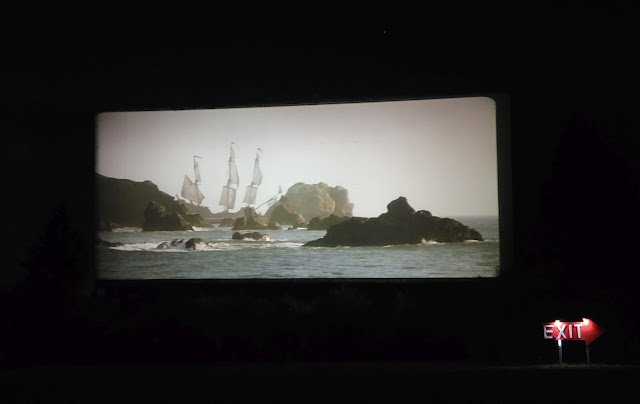 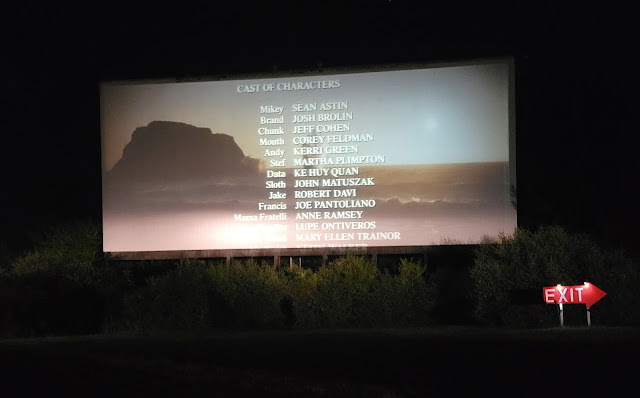 I realize that I use the expression "dream come true" to describe a lot of experiences that we've had at the Mahoning, but I don't think it's ever been as appropriate as now.  At the risk of sounding dramatic, if you told me I had 24 hours left to live and I could pick whatever I wanted to do on my last day, one of those things would be to watch The Goonies with my wife at a drive-in theater.  We've watched it at home countless times, but neither of us ever had the opportunity to see it on the big screen, let alone from a 35mm print at the drive-in.  It was absolutely perfect! 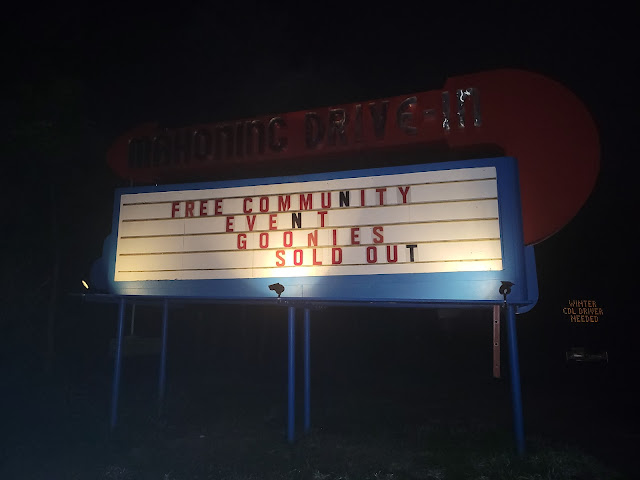 It's awesome that the Mahoning screened this for the community free of charge.  What's less awesome is the fact that the lot was only about half full despite the fact that all of the free tickets for the night had been claimed.  Unfortunately, the weather forecast predicted thunderstorms for Sunday night, and since the tickets were free, I think people took the attitude that they'd rather skip out on the show rather than risk coming to a show in the rain.  It's a pretty lousy thing to do in my opinion.  The Mahoning schedules staff for the night and order food and merchandise based on the number of tickets that have been sold.  It's one thing if you paid for the tickets to a show that isn't sold out and you just can't make it.  It happens.  But to be given free tickets and not show up is just plain selfish.  It hurts the drive-in, who are now stuck with a bunch of extra t-shirts that they're probably going to have a hard time selling to folks who weren't at the show, and it also hurts the fans who weren't able to reserve a ticket before they were all claimed, and who would have been happy to come out last night if they weren't blocked by people who ended up staying home anyway.  The folks at the Mahoning went out of their way to put together a nice night where people could come out to see a movie with their friends and family free of charge.  The least that folks can do to repay their kindness is to show up, or give their tickets to someone who will.  My apologies for the rant, but I had to get that out of my system.
For what it's worth, a night of rain at the drive-in isn't a bad night at all.  I'll be the first person to admit that I'd rather a nice warm night without any rain so that we can sit outside, but there's something cozy about seeing a movie in the pouring rain while you're warm and dry in the car.  Second, you can't always count on the forecast to be correct.  As it turned out, a light rain did start to fall at around quarter to 8, but it cleared up about a half hour before the movie began, and there wasn't a drop of rain during the trailer reel or the movie.  It was a beautiful night, and the folks who made it out to the drive-in had a great time.