The Return Of Tarantino A-Go-Go 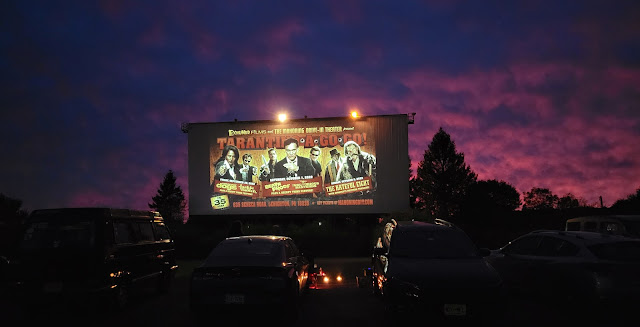 Tarantino A-Go-Go: Volume 2
Mahoning Drive-In Theater - Lehighton, PA
Last year's inaugural Tarantino A-Go-Go was one of my favorite weekends at the Mahoning, so I had been looking forward to this year's follow-up from the moment that it was announced. 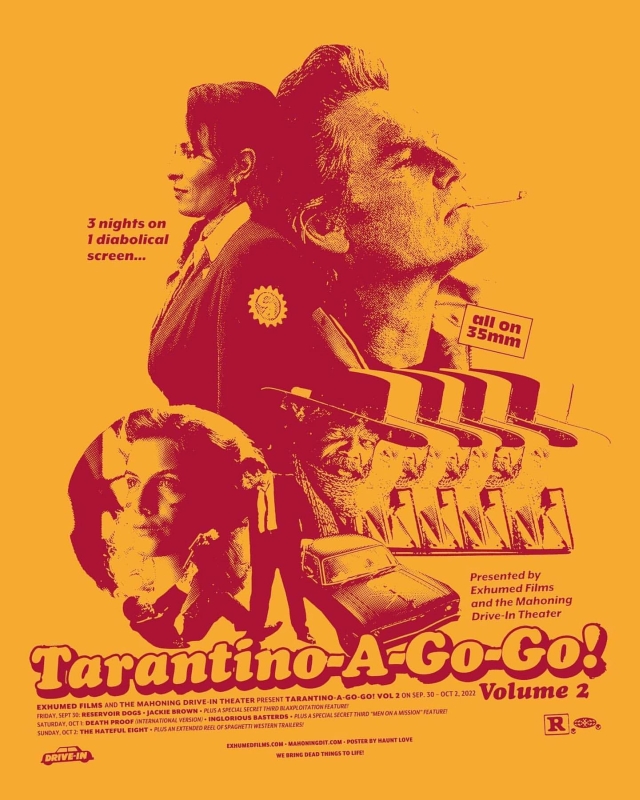 Like last year's event, the poster for Tarantino-A-Go-Go Volume 2 was designed by Justin Miller.  He designs a lot of the posters that have been available for sale at the Exhumed Films table since we started going to the drive-in, including Camp Blood, Reel Rumble, and last year's season ending double feature of Cujo and The Howling. 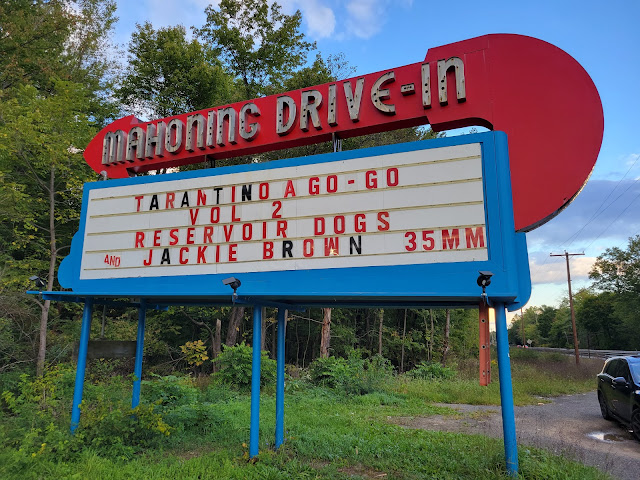 Night One - Friday, September 30
Reservoir Dogs and Jackie Brown
The lineup on the first night began with the first and third full length feature films that were directed by Quentin Tarantino, and ended with a "special secret third blaxploitation feature".  Neither my wife and I are feeling all that great, so we both decided to go into Friday and Saturday with the expectation that we were going to see a double feature, and we'd only stay for the third secret feature if it absolutely blew us away.  We've been asked not to name the secret features off of the lot, but I will say that we did stay for about the first ten minutes.  The movie looked alright, but it was pretty far from blowing us away so we headed home.  I wouldn't mind seeing it at some point when I'm more awake and less sick so that I could pay it the attention that it deserves. 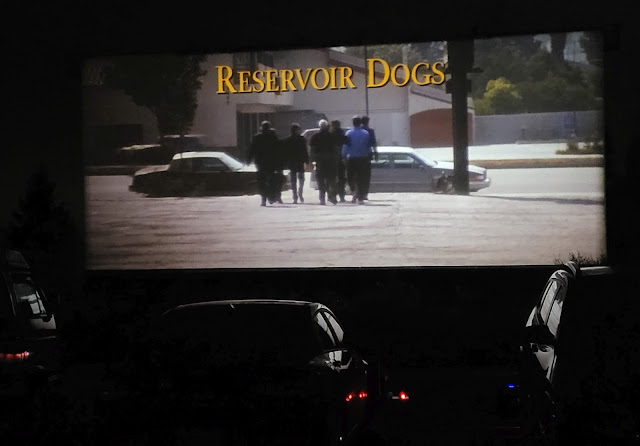 The first movie of the night was one of my all time favorites and the first full-length feature film ever directed by Quentin Tarantino: Reservoir Dogs.  This movie was shown at Sundance at the start of 1992 and it blew people's minds, even causing horror icon Wes Craven to walk out because the scene in which Mr. Blonde tortures Officer Nash was too much for him to take.  By the end of the year, it was being shown in theaters across the United States.
I was twelve years old when this movie had its theatrical run, and this was a couple of years before I had ever even heard of the internet, so I was completely unaware of it.  A few years later, I saw Pulp Fiction for the first time and it completely blew my mind.  It was then that I learned who Quentin Tarantino was and I discovered and fell in love with Reservoir Dogs soon thereafter.  Getting to see it on the big screen at the drive-in is yet another dream that the Mahoning has brought to life. 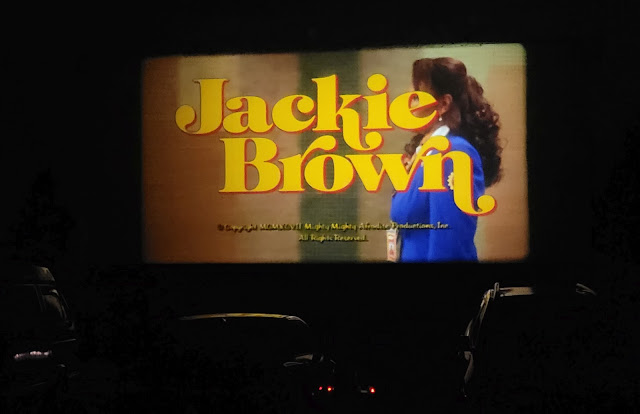 The second movie of Tarantino A-Go-Go Volume 2 was Jackie Brown.  Tarantino's third film was released on Christmas Day 1997.  Although I was looking forward to seeing more from the iconic director by this point in my life, I didn't go to see it during it's initial theatrical run.  Looking back on it now, I'm really not sure why.  The only thing I can think of is that I was 17 years old at the time, and if I was at a movie theater back in those days, it was probably because I was on a date.  There were plenty of things about dating the teenage me that I'm sure were a massive pain in the ass, but one of my better traits was that I was easygoing when it came to movies and restaurants.  A dinner-and-a-movie date with me was pretty much always going to be my partner's choice.  Sadly, none of my dates were into crime dramas that pay homage to 70's blaxploitation films, so I didn't catch this movie until it was released on home video.  This glaring omission from my list of movies seen in theaters was rectified thanks to the Mahoning Drive-In Theater.
One of the many things that made me fall in love with this flick is its incredible music.  Hearing Bobby Womack's Across 110th Street and La-La Means I Love You and Didn't I Blow Your Mind This Time (both by The Delfonics) echo across the lot was pure magic.
If you've never watched Jackie Brown before, I absolutely implore you to give it a shot, but don't watch it passively.  Pop a bucket of popcorn, grab your favorite tasty beverage, turn off all of the lights and any devices that could serve as a distraction and just allow yourself to be taken away by the story.  I'm the furthest thing you can get from a professional film critic, but I can tell you that there is something that's truly special about this movie. 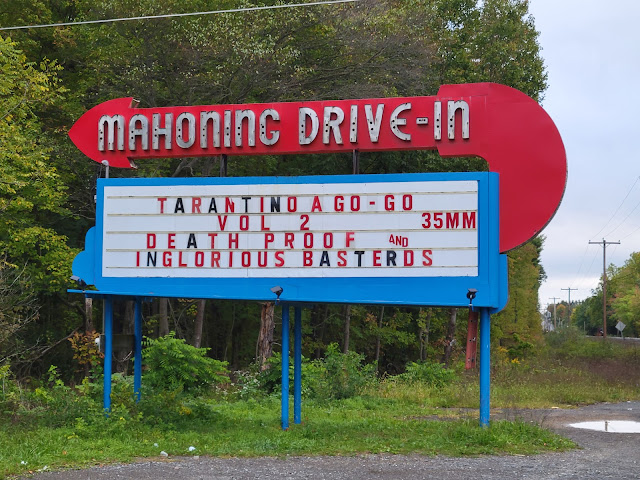 Night Two - Saturday, October 1
Death Proof, Inglourious Basterds
Whereas Friday night was an opportunity to see movies on the big screen that I missed during their initial theatrical run, the double feature on Saturday night was two movies that I did get to see in theaters when they were first released. 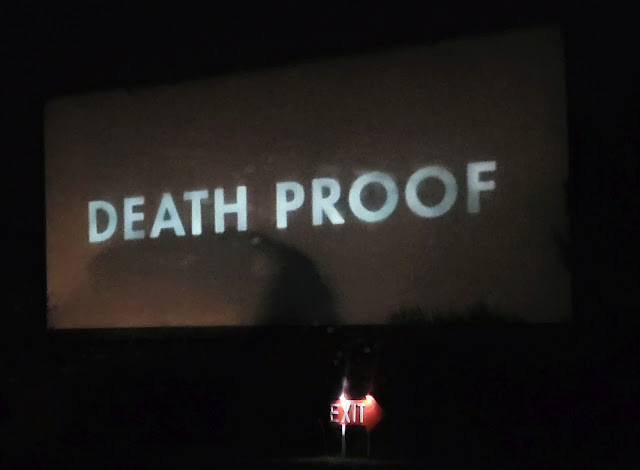 My wife and I originally saw Death Proof when it was originally shown as the second half of the Grindhouse double feature (along with Planet Terror) in April 2007.  I know I've said it a million times, but it never fails to amaze me how quickly time flies.  Hell, that was over fifteen years ago and it feels like it went by in the blink of an eye.
The initial theatrical run of Death Proof had segments that were removed and replaced with a "missing reel" card to give the audience a more authentic experience of what it was like to see a movie at the old grindhouse cinemas that Tarantino frequently visited in his youth.  While I thought this was an awesome experience, it unfortunately didn't sit well with the majority of the movie audience back in 2007, and it became one of his only films to have lost money at the box office.  Because of this, the two halves of Grindhouse were split up and released separately in international markets, and the missing reels were included in both films.  We got to see a 35mm print of the internationally-released extended version of Death Proof at the Mahoning, which includes over 15 minutes of additional footage that was not included in the original theatrical release of the film in the United States.  So, I can now say that I saw both versions of Death Proof projected from a 35mm print - one in an indoor theater and one at a drive-in.  Call me a nerd if you want to, but I think that's pretty awesome! 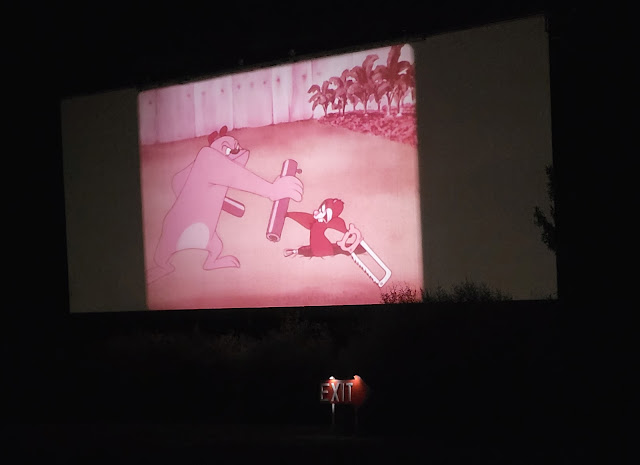 Intermission began with the screening of a 35mm print of a MGM cartoon from 1950.  It was a Tex Avery short called Garden Gopher, and it featured his dog character, Butch, who wants to bury a bone and is prevented from doing so by a gopher who is causing chaos in the garden. 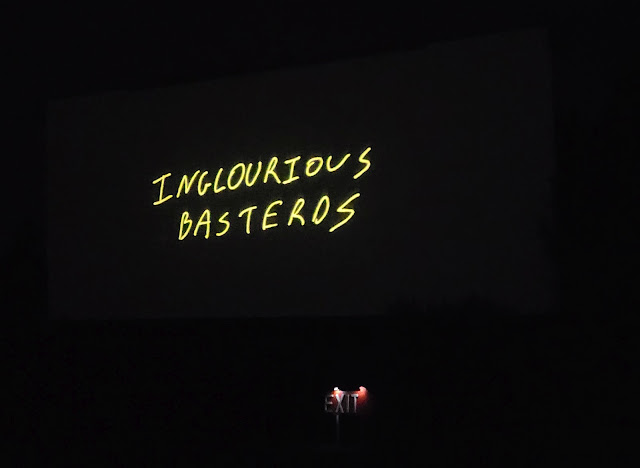 Inglourious Basterds is my favorite war movie ever made.  We actually saw this at a drive-in theater during its original theatrical run thirteen years ago.  I don't think I've ever cheered as much during a movie as I did during this one, before or since, and I'm very thankful to have had a second opportunity to see it on the big screen under the stars.
Even if you don't like war movies, this is a must-see film. 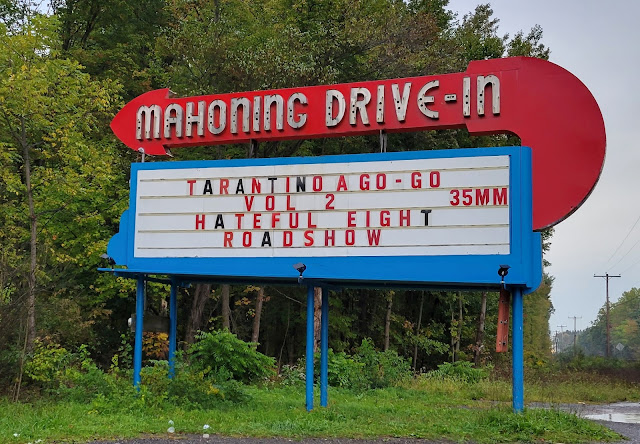 Night Three - Sunday, October 2
The Hateful Eight
The final night of Tarantino A-Go-Go Volume 2 was a single feature, but it was a truly special experience.  It began with nearly 20 minutes of vintage spaghetti western trailers and was followed by a version of Quentin Tarantino's eighth film that I have never seen before. 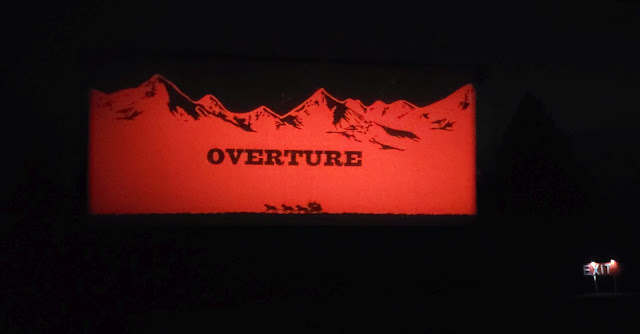 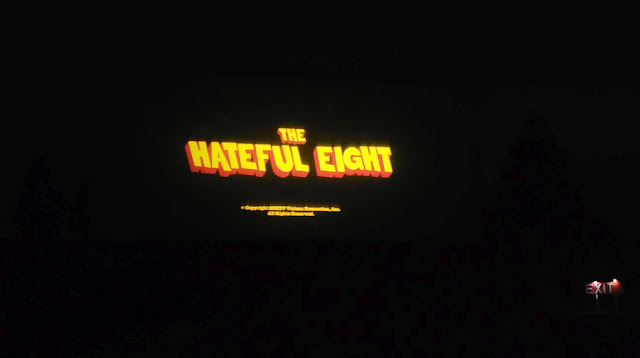 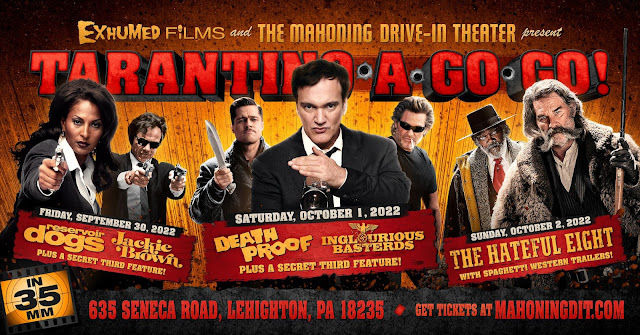 Another incredible weekend at the Mahoning Drive-In Theater is in the books.  There's less than a month left of the 2022 season.  I'm not sure what I'm going to do with myself over the weekends.  I suppose I'll have a lot of time on my hands to catch up on Stranger Things and Cobra Kai and whatever Star Wars series have popped up on Disney's streaming service that have fallen under my radar.  I'm sure I'll enjoy them, but no matter how good they are, it just won't be the same feeling as the one that I get on that lot in Lehighton, Pennsylvania.  I'm telling you, this place is magic.