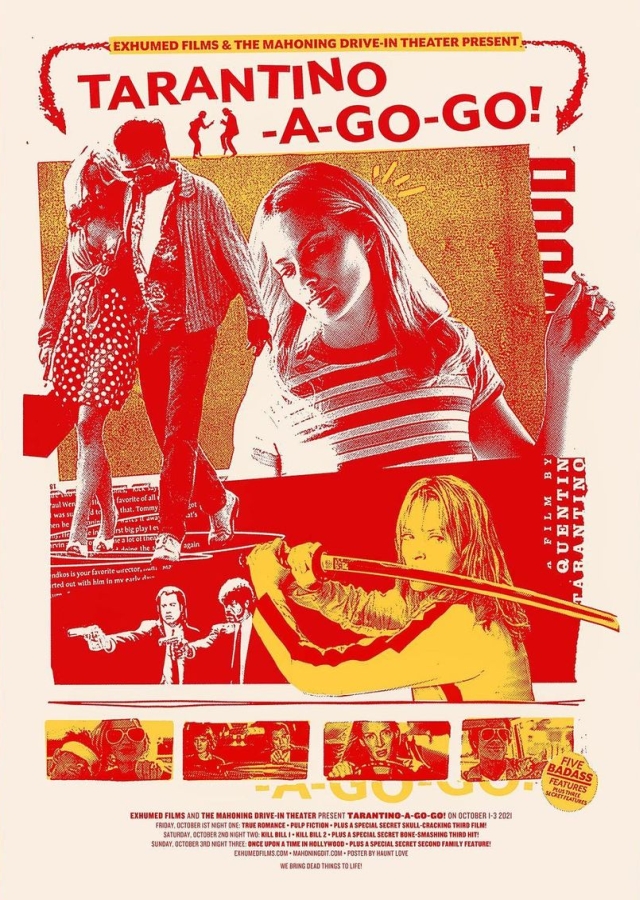 Tarantino A-Go-Go
Mahoning Drive-In - Lehighton, PA
The drive-in has quite a few two and three day events throughout the year.  Since this past Spring, I've tried to make it to one night of each theme weekends, but there was no way I was going to miss a single minute of this.  This incredible poster designed by Justin Miller illustrates why Quentin Tarantino is my favorite director of all-time.  His films take you into a wild and vivid world that you don't want to leave when the credits roll.
This event was a co-presentation with Exhumed Films, the group that has been responsible for bringing so many incredible movies to the drive-in this year, but these weren't ordinary film prints.  Each movie was screened from original 35 mm prints that were sent to the Mahoning from Quentin Tarantino's film library.  Seriously, how amazing is that! 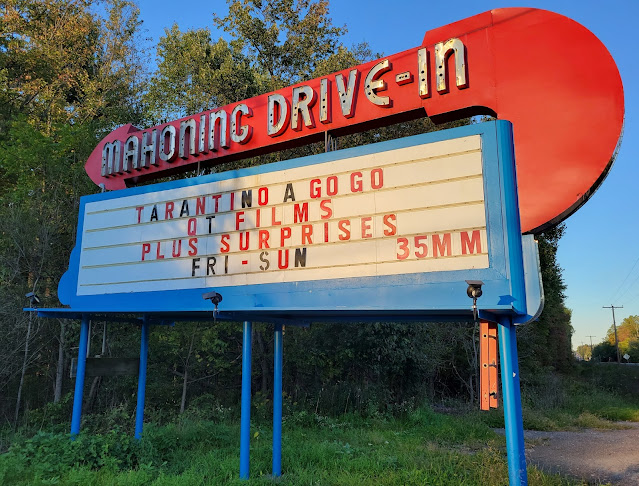 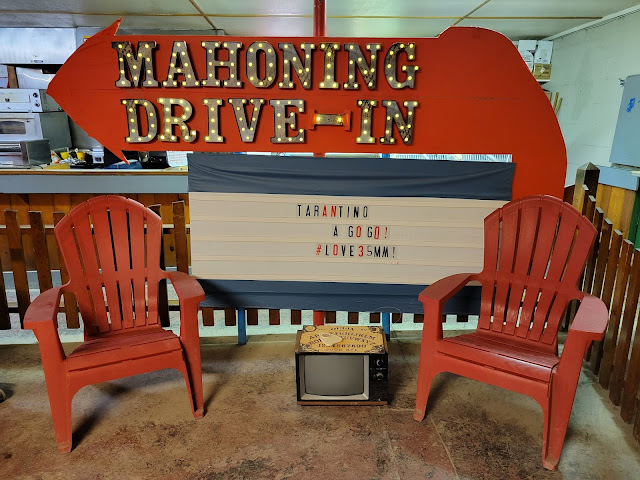 One really awesome thing about the Mahoning Drive-In that I rarely mention are the secret features.  These can come in the form of a short pre-show, or a full-length film.  They don't happen every night, but they're a very pleasant surprise when they do.  The Tarantino A-Go-Go event is the first time that I'm aware of in which the presence of a secret feature was announced to the public ahead of time.  We have been asked to not to share the contents of any secret features at the Mahoning, so you're not going to find the titles here, but there was a different one to close out each night and they were incredible. 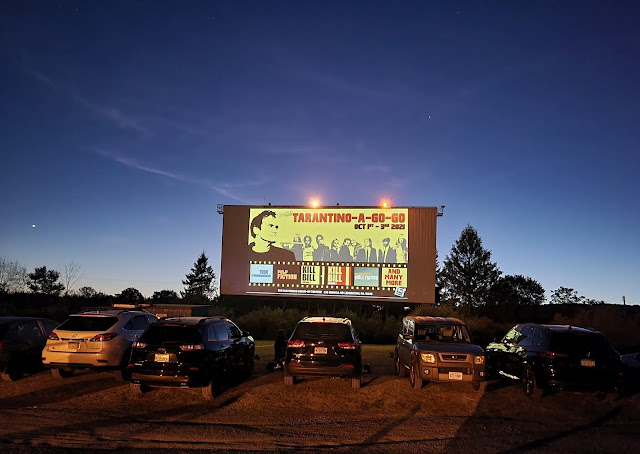 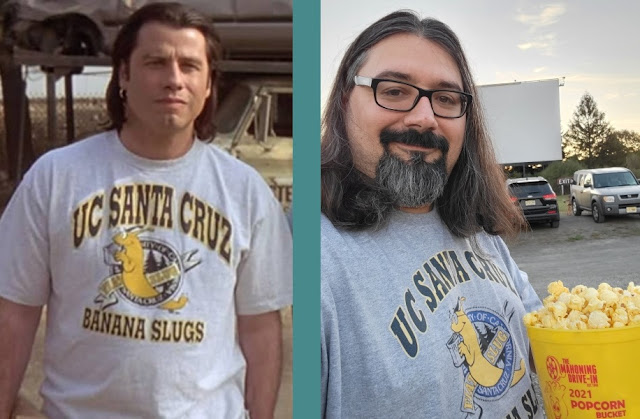 I'm not a big cosplayer, but I do have a UC Santa Cruz Banana Slugs t-shirt that John Travolta changes into at Jimmy's house in Pulp Fiction, so I wore it on Friday night.  It's an admittedly half-assed commitment to the look because I had no intention of shaving or cutting my hair, but it was still fun. 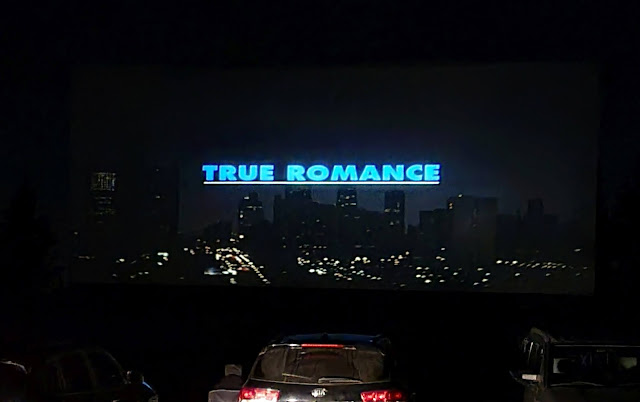 Prior to the first movie, there was a trailer reel shown for the Sonny Chiba trilogy of films that Clarence Worley is watching in the theater when he first meets Alabama Whitman: The Street Fighter, Return Of The Street Fighter, and Sister Street Fighter.
Following that, we were treated to one of my favorite love stories of all time, the 1993 cult classic True Romance.  I was 13 years old when this movie first hit theaters, and I didn't see it until I brought it home from a rental store in my early 20's.  It was written by Quentin Tarantino, but it's the only one of the films announced for Tarantino A-Go-Go that he didn't direct.  If you haven't seen it, it's available to stream on HBO Max and to rent on Amazon Prime Video, and I strongly recommend it. 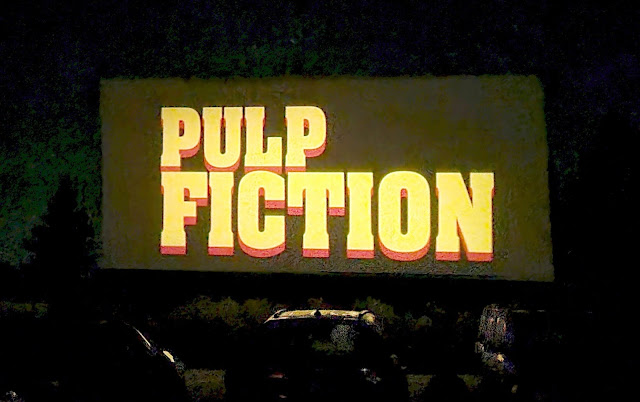 If your pulse doesn't quicken from Dick Dale's guitar during the opening credits of Pulp Fiction, you may want to see your doctor.  This movie transcends time and genre and stands apart as one of the greatest films of all time.
Pulp Fiction debuted in theaters nationwide in October 1994.  I was 14 years old at the time, and I didn't get to see it in theaters, so the opportunity to see it on the big screen at the drive-in was nothing short of a magical experience for me.  From the opening scene of Tim Roth selling Amanda Plummer on the benefits of robbing restaurants instead of liquor stores, to the closing scene of Samuel L Jackson and John Travolta leaving that same diner after a successful robbery that most definitely did not go as planned, my eyes were glued to the screen. 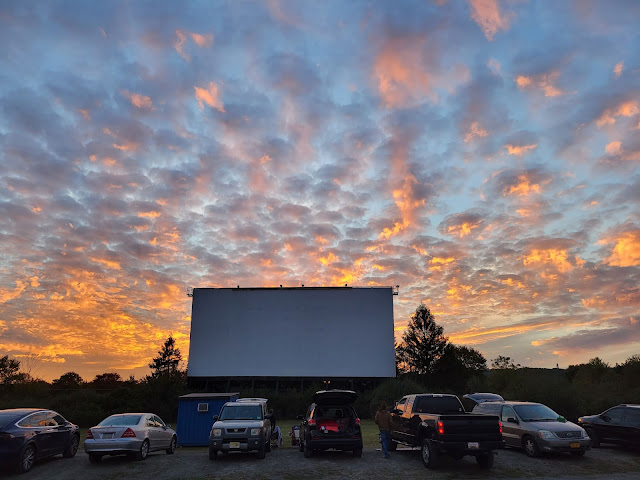 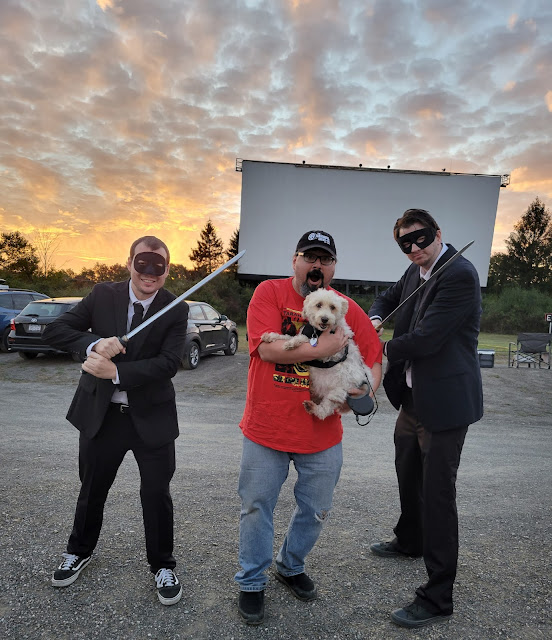 My efforts to look like Vincent Vega may not have been too great, but these two dudes had a perfect Crazy 88 cosplay, complete with samurai swords.  They were kind enough to take a photo with me and little Harvey.  Save me, Uma! 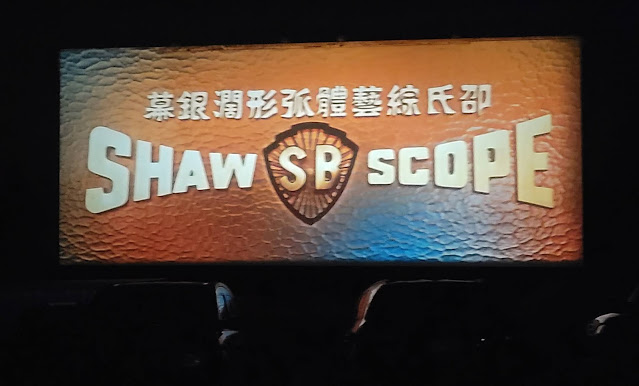 The folks at Exhumed screened a collection of Shaw Brothers trailers before each of the three films that were shown on Saturday night.  They set the tone perfectly for Tarantino's epic love letter to the kung fu films that both he and I grew up watching.
Dude... I don't even know how to describe the Kill Bill movies.  It's a brightly colored comic book featuring the greatest revenge story ever told, set perfectly to music.  It was written and performed beautifully and leaves you sitting back in your chair awestruck at the carnage that has just unfolded before you. 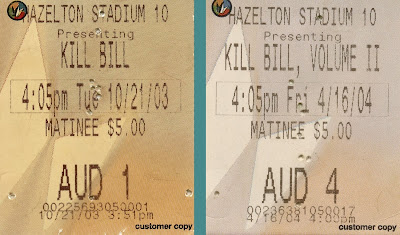 Unlike the movies that screened on Friday night, I was fortunate enough to have experienced both of these movies for the first time on the big screen during their original theatrical run.  I was 23 years old at the time, and I've kept the stubs all these years.  There's quite a few pinholes in them now from from being thumb tacked to corkboards at nearly every place I've lived over the past 17 years, and they're now kept in a box that someone will no doubt stumble across one day after my death as they curse whoever assigned them to clean up the house of some weirdo who saves his ticket stubs. 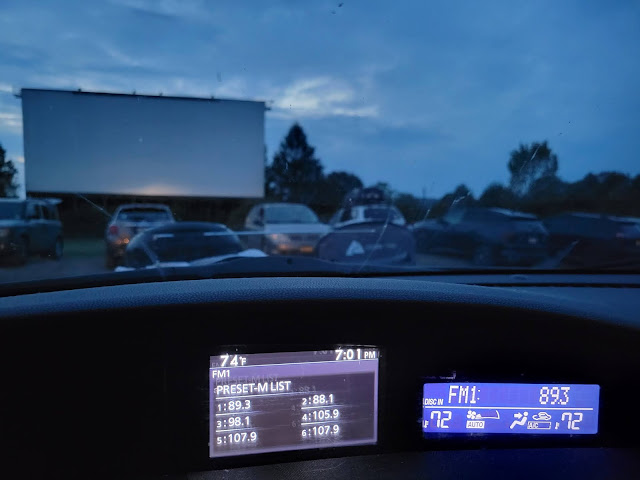 Night Three - Sunday, October 3
Once Upon A Time In Hollywood, plus a special secret family feature 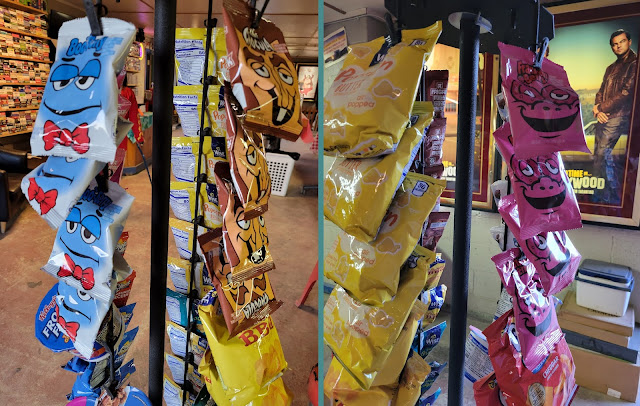 There are still a few packages of Count Chocula, Frankenberry and Boo Berry in the snack bar that are are left over after last month's Monster Mash weekend.  They make a very nice addition to a bucket of popcorn at the movies. 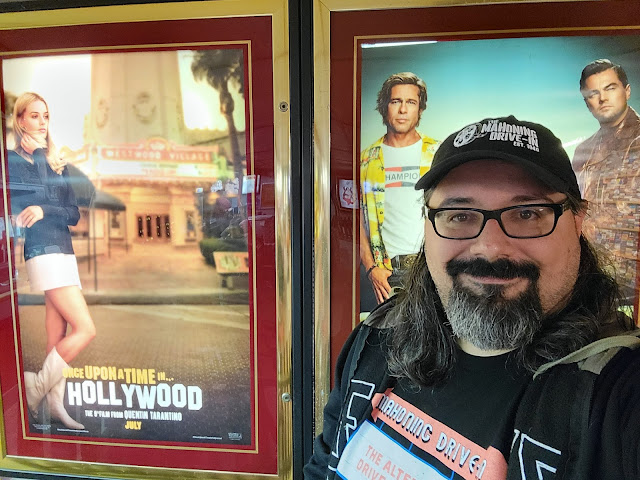 You may have noticed the Once Upon A Time In Hollywood posters in the background of the photos of the Monster Cereal.  They've been hanging up in the snack bar for quite a while before the announcement of Tarantino A-Go-Go, foreshadowing the event.  It looks like I'll have to keep my eyes open for other easter eggs for upcoming shows. 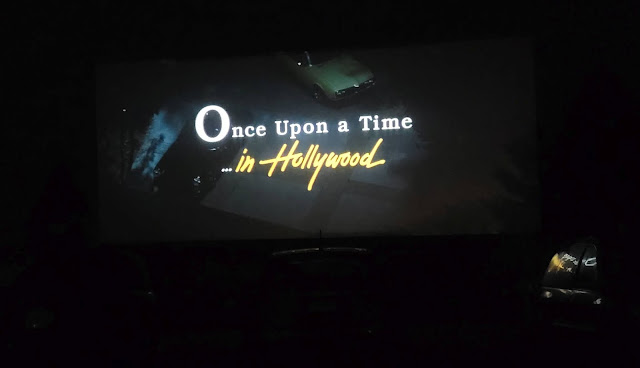 Once Upon A Time In Hollywood is the newest film that I've seen at the Mahoning, or any other drive-in theater for that matter, for a long time.  It debuted in theaters just over two years ago, and I saw it at the Regal Theater near the Laurel Mall in August 2019, just a few months before the pandemic changed the world.  I was blown away the first time I saw it, and I felt the exact same level of excitement seeing it under the stars.
Before the movie, we had a curated trailer reel featuring classic films from the 1960's including The Wild Bunch.  After the trailers, we had an unexpected bonus before the show that I feel very fortunate to have been able to see, but it requires a bit of an explanation.  Quentin Tarantino bought a historic movie theater in Los Angeles that dates back to the Great Depression.  The theater went by many names over the past 90 years, but it is now called the New Beverly Cinema.  Like the Mahoning, this theater screens double features of vintage movies from their original 35mm prints, many of which come from Quentin's own film collection.  When this theater screens Once Upon A Time In Hollywood, there is a pre-show that includes the full music video of Leonardo DiCaprio singing Green Door on Hullabaloo, and a full scene from Lancer that occurs in the show prior to the part that we see in the movie.  Those reels were sent to the Mahoning and screened before the movie.  To the best of my knowledge, this is the first time this footage was shown for an audience outside of the New Beverly Cinema in Los Angeles.
Of course, the movie itself was phenomenal.  It started to lightly drizzle about 2/3 of the way through the movie, and the rain really started coming down right at the final scene as Rick and Cliff lay waste to the idiots from the Manson Family.  No amount of rain can put out the flamethrower of Rick F'n Dalton.  It did mean that we had to watch the secret second feature from inside the car instead of our lawn chairs, but we got very lucky with the weather over the past few weeks, so it's no big deal. 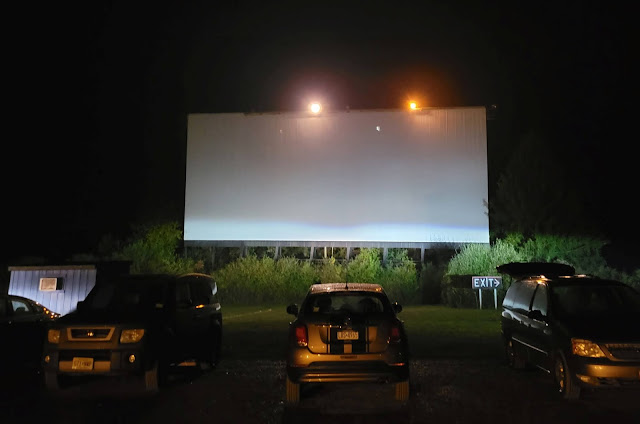 And that's a wrap on what I hope will be the first annual Tarantino A-Go-Go - eight awesome movies (5 announced, 3 secret) over three incredible nights at the Mahoning Drive-In.  I'm already fantasy booking the next one in 2022!