Back To The 90's At The Steel Stacks 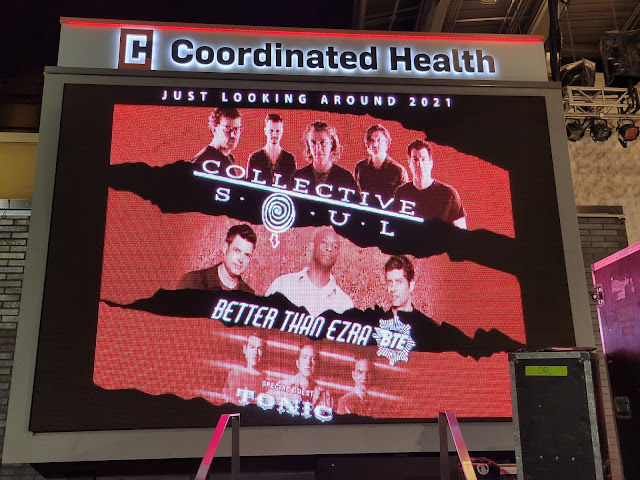 Tonic / Better Than Ezra / Collective Soul
Just Looking Around: 2020 2021 Tour
Levitt Pavilion Steel Stacks - Bethlehem, PA
This was my first time seeing Collective Soul perform in over fourteen years.  The two concerts had a few things in common.  Both shows featured three bands who are best known for albums that were released in the 90's.  However, on August 22nd, 2007, Collective Soul was the opening act for Live and Counting Crows.  Last night in Bethlehem, they were the headliner, with Tonic and Better Than Ezra opening for them.
Last night's show was the Bethlehem stop on the trio's Just Looking Around tour.  This was originally their 2020 with the Steel Stacks show scheduled to take place on June 15th of last year.  It was postponed to July 13th of this year due to the Covid-19 pandemic, and then it was postponed a second time to September 9th, 2021.  I'm not sure if the second postponement was due to the pandemic or something else altogether, but I'm very happy to say that 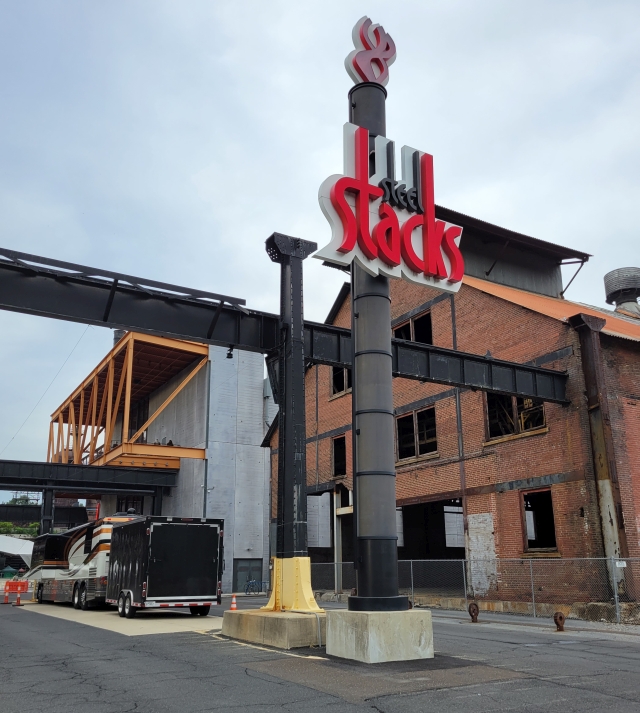 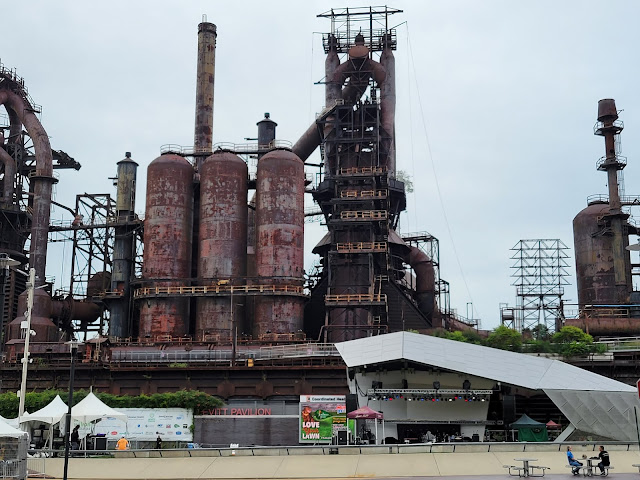 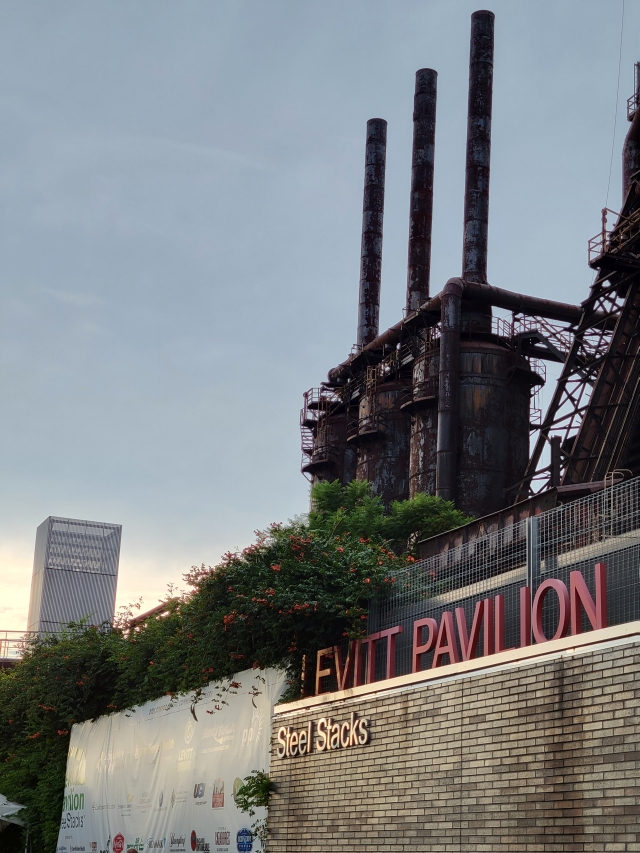 The Steel Stacks in Bethlehem is one of the coolest venues that I've ever been to.  It's built around the industrial ruins of the Bethlehem Steel company with a stage at the base of the old blast furnace.  During their annual Musikfest festival, there are multiple stages and performances for ten days.  We saw Duran Duran there six years ago on the Sands Stage, and after the show, we walked around to what is now the Levitt Pavilion to see Rubix Kube's set.  This is the stage where last night's show had taken place.
There are more than just concert stages at the Steel Stacks.  There's a movie theater, bars, restaurants, museums, a convention center, and a public walkway where you can go through some of the structures that remain from the days of Bethlehem Steel.  It's truly incredible, and it shows what a city can accomplish for the public good if they work together to achieve it. 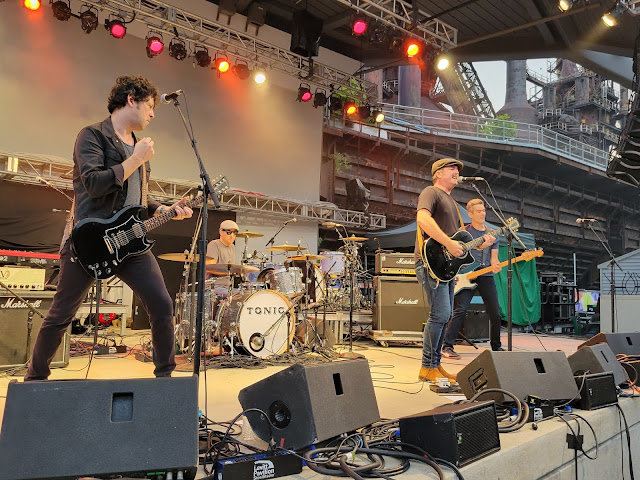 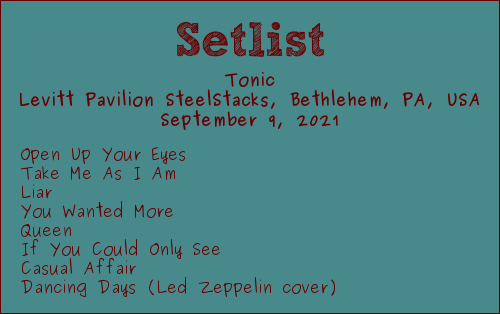 Tonic started their set with the first track off of their 1996 debut album, Lemon Parade.  Open Up Your Eyes is the first of the band's that I became familiar with when I was a teenager, and it's still my favorite song of theirs.  It's become an anthem to me against anxiety, over-thinking and the opinions and criticisms of others.  Don't let all of those voices, whether they be from others or the voices of self-doubt, tell the story.  Open your eyes and see the story for yourself.
This was followed up with Take Me As I Am and Liar, both off of their third album: Head On Straight.  I'm not familiar with this record, but it was nominated for a Grammy in 2003.  I especially enjoyed Take Me As I Am, which was also Grammy nominated.  Next, they played You Wanted More, which is a song that has taken on a much deeper meaning to me since I heard it for the first time while watching American Pie when I was 18 years old.  The next song, Queen, was also off of the band's 1999 sophomore album, Sugar.  This one wasn't also on the soundtrack of a hit comedy, so I wasn't as familiar with it, but it's a good song.
The sixth song of Tonic's set was unquestionably their biggest hit: If You Could Only See.  Before they played it, singer/songwriter Emerson Hart explained that he wrote this song after a conversation with his mother.  He was 21 years old and in love with a girl whom he had just proposed to.  His mother told him that he was too young for this and it was the wrong move, so he tried to explain to her that "if you could only see the way she loves me, maybe you would understand".  He then told us that, as it turned out, his mother was right and that his relationship with that girl was a total disaster.
The second to last song was Casual Affair, which is the second track off of Lemon Parade, and they closed with an awesome cover of Led Zeppelin's 1973 hit Dancing Days.  I'm embarrassed to say that I had completely forgotten that this was a Led Zeppelin song.  When I was a teenager, the version that I was the most familiar with was the Stone Temple Pilots cover from the 1995 tribute compilation, Encomium.  I've listened to that cover so many times that I've come to associate it as an STP song.  I couldn't find it on any of Tonic's albums, but it's a cover that they must do pretty often because there's a YouTube video from 2011 that shows the band performing it.  They definitely do the song proud, and it was a great way to close out their set. 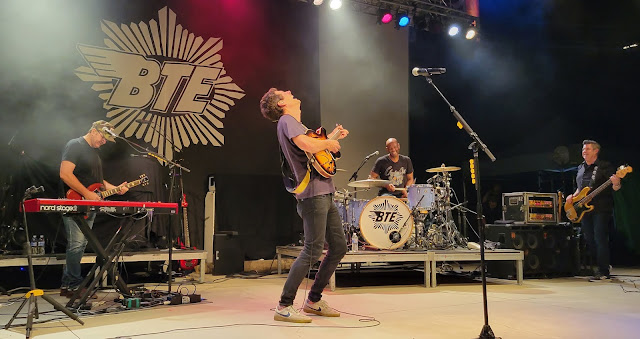 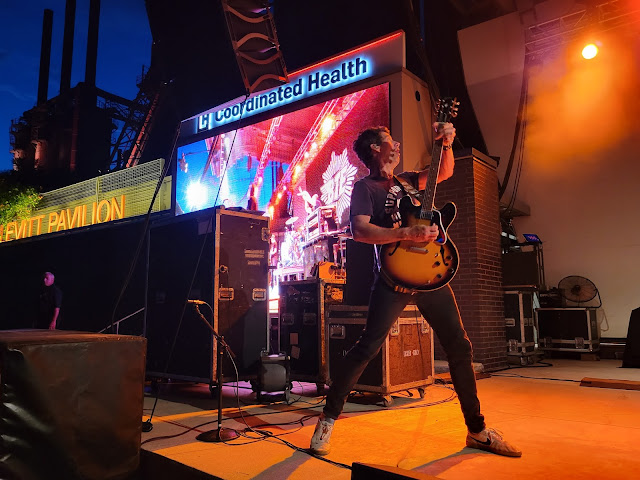 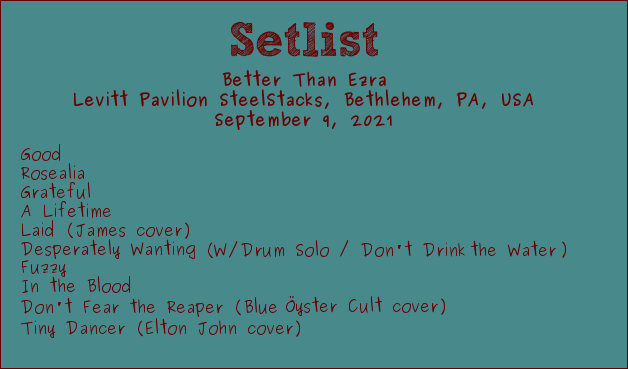 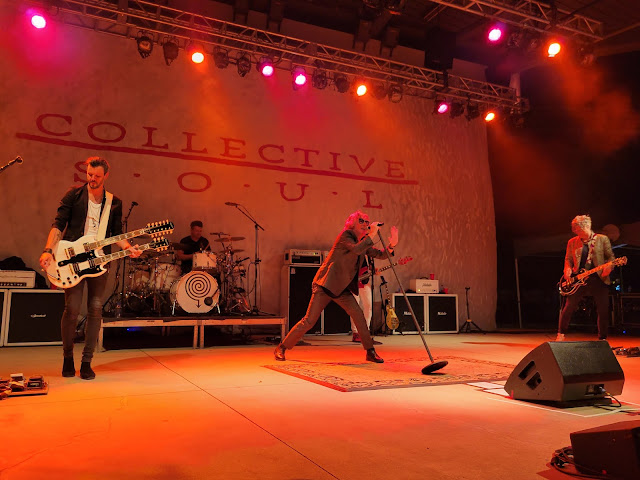 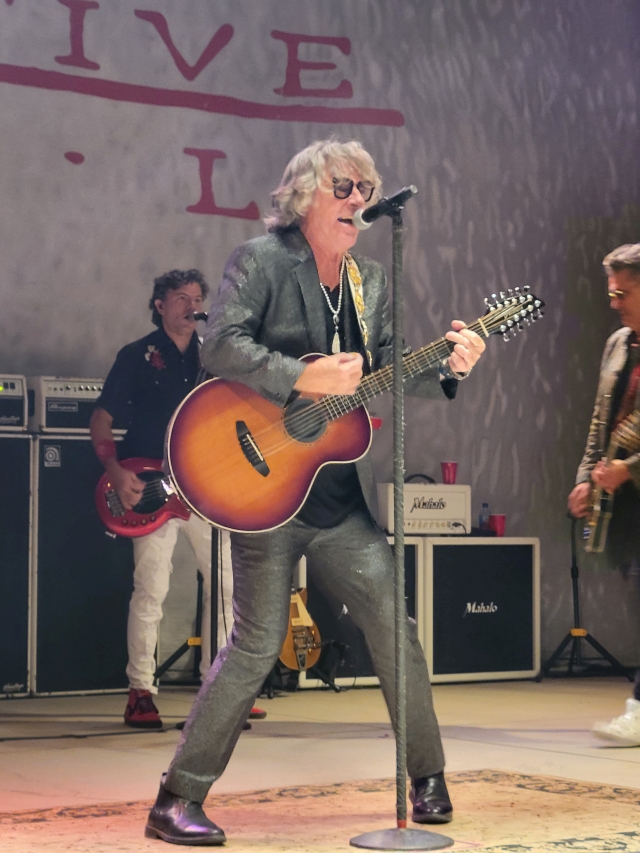 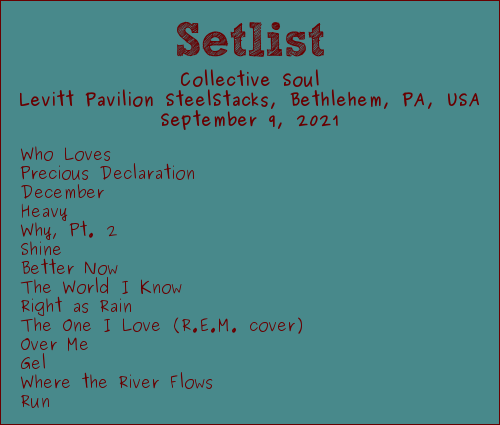 The headliner of the night was a band that I've been a fan of for over a quarter century since their first album was released.  In fact, Hints, Allegations and Things Left Unsaid was the first album I ever bought on CD.  I bought it in December 1994 from Boscov's in the Laurel Mall in Hazleton with money I was given in Christmas cards after receiving a CD boombox as a Christmas present.  Don't ask me why I still remember all of that because I have no clue.  Some things just stick in your head and that's one of them.

I still have that same album that I bought 25 years ago.  That thing got a lot of play, especially in the first month or so when it was the only CD in my collection.  I came to find out many years later that this was actually the band's raw basement demo that the record label rushed into production, and the band considers their 1995 self-titled album to be their first record.  Even still, Hints, Allegations and Things Left Unsaid went on to go gold and to produce a single that VH-1 ranked at #42 in their 100 Greatest Songs Of The 90's countdown.  Pretty good for a demo tape, dont'cha think!
This is my second time seeing them in concert, but it's the first time I've seen them perform a full set.  They were the opening act for Collective Soul back in 2007 when I saw them for the first time.  Looking back on my life, that concert was kind of the kickoff to college.  It was on a Wednesday, August 22nd and my first day of class was the following Monday the 27th.  It began a four year period that I think may have saved my life.  It gave me an opportunity not only to broaden my mind, but to believe for the first time in my life that I am good enough.  Although I didn't realize it at the time, it allowed me to spend a lot more time with my grandparents in what would be the final years of their life. It was an important chapter in my life that began with this concert and ended with my bachelors degree, so the opportunity to see Collective Soul again has a few layers of warm and fuzzy nostalgic feelings for me.
The show was every bit as fantastic as I was hoping it would be.  They opened the show with a song I had never heard before called Who Loves.  It was really good, and although he didn't say so, I'm guessing this track will be on an upcoming album.  During the show, someone from the audience shouted for the band to come back to Bethlehem again, and lead singer/songwriter Ed Roland said "We will, brother.  We've got two new albums in the can!", so we know that we've got a lot of awesome stuff to look forward to.
The setlist included Shine from their first album, four songs from their second album (December, The World I Know, Gel and Where The River Flows), Precious Declaration from their third album, and two songs from their fourth album (Heavy and Run).  That last track is another connection that my mind has made that links Collective Soul and college.  I had a mix CD in my car that I would sometimes play when I was stressed out from classes to kind of help calm and motivate me, and the first track on that disc was Run.
They mixed in a few songs from their post-2000 albums that I'm not as familiar with, but each of them were pretty awesome songs, including Why Pt.2 from their 2000 album, Blender, Better Now from their 2004 album, Youth, and two songs from their 2019 album, Blood called Right As Rain and Over Me.  I didn't realize they had put out so much material in the 2000's, so I have quite a lot of listening to catch up on.  They also performed a tribute to fellow Georgia icons R.E.M. with an amazing cover of The One I Love. 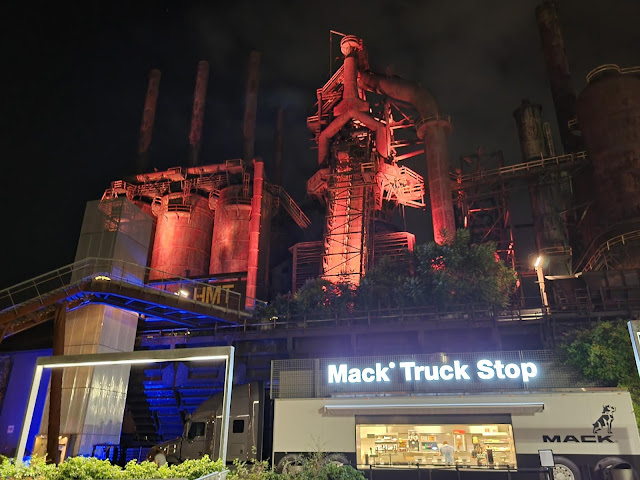 I'm glad to have gotten to see live music again.  Between the anti-vaxers, the spread of the Delta variant, and the emergence of the new Mu variant, I'm beginning to think we're going to be back on lockdown by Christmas, so I've been trying to get out and do as much as I can while we still can.  They've already cancelled Funfest in Hazleton, which was supposed to be this weekend, and my Dad seems to think that the Bloomsburg Fair is going to end up being cancelled too.  It wouldn't surprise me too much.  All I can do is enjoy as much of the world as I can while it's still here to enjoy, and hope that we don't destroy ourselves any more than we already have.  Hope for everything.  Expect nothing.