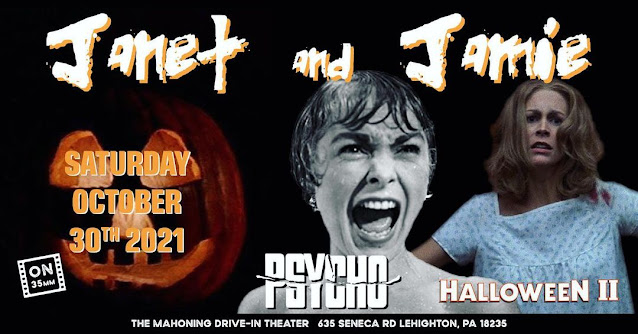 Janet and Jamie
Mahoning Drive-In Theater - Lehighton, PA
Although this isn't the final show of the 2021 season, it was the last night that was announced.  We found out the reason for this on the Mahoning Drive-In Podcast.  The original plan for the October 30th show was to screen Halloween II first, with Halloween H20 as the second half of the double feature.  It makes sense to play these two films back to back, because H20 is an alternate timeline of the Halloween franchise which disregards every movie that takes place after Halloween II and treats itself as the third movie in the series.
Unfortunately (or fortunately, as things turned out), Halloween H20 was unavailable to the Mahoning this October because it had been reserved by another group for an exclusive event, so they had to go with their backup plan, which was to have a double feature of Psycho, starring Janet Leigh, and Halloween II, starring Ms. Leigh's daughter, Jamie Lee Curtis.
With all due respect to Halloween H20, this is a massive upgrade.  Don't get me wrong - H20 is a good horror film.  I saw it at the Laurel Drive-In during its initial run when I was 18 years old, but I can't imagine that anyone in this world, including everyone in the cast and crew of Halloween H20 itself, wouldn't rather see the original Alfred Hitchcock masterpiece if given the choice between the two.  This is like going to McDonald's and being told "I'm sorry, we're all out of Big Macs, but please enjoy this filet mignon instead". 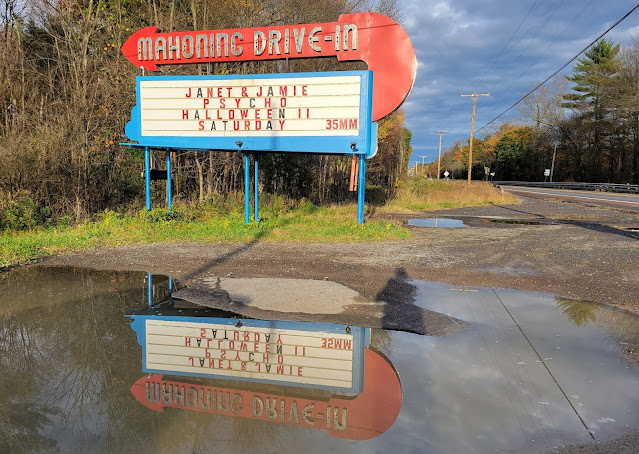 I'm not sure what's going on with the area in front of the Mahoning sign, but there seems to always be a puddle there.  It gets smaller if it hasn't rained for a couple of weeks, but it's always there.  If they screen Stephen King's It again, I'm going to put a little paper sailboat on the water with a red balloon nearby. 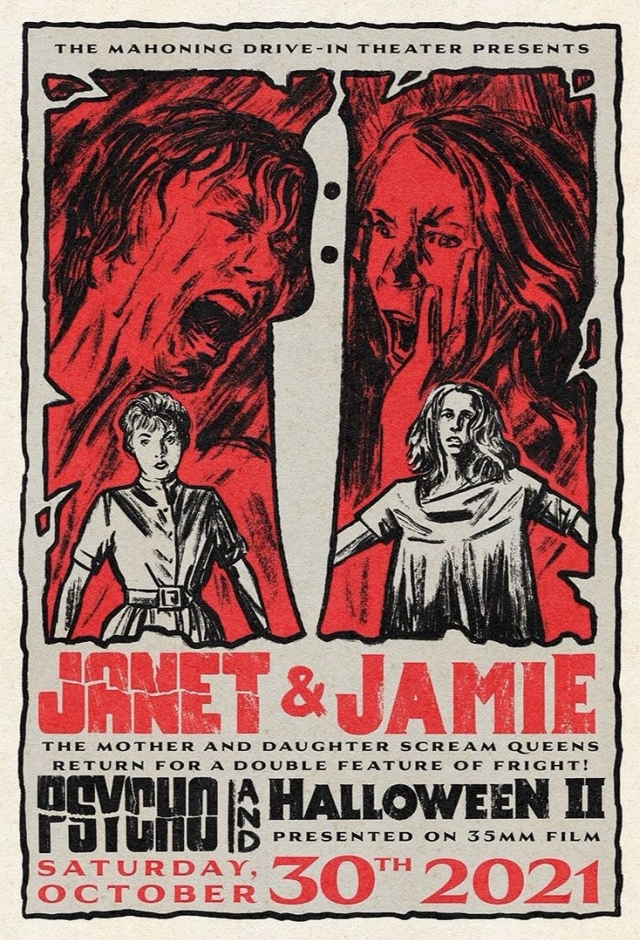 Like the one for last night's show, tonight's poster was designed by artist Tom Bifulco.  It features Psycho star Janet Leigh, and her daughter and the star of Halloween II, Jamie Lee Curtis, with their names written in the font of their respective movies.  This dude always does a really awesome job with the show posters. 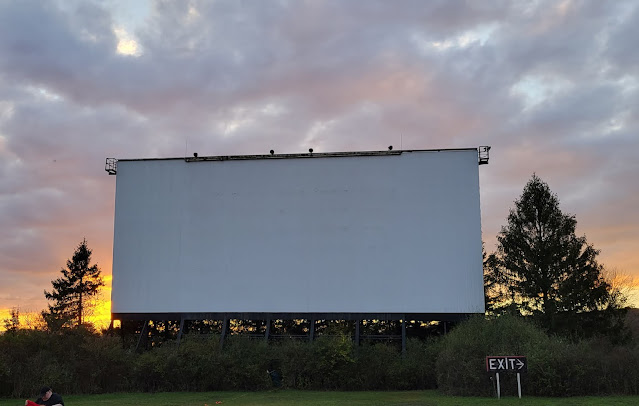 After a cold and rainy night for Ricci's Pieces, it was an unseasonably warm night at the drive-in.  We got settled in right around the time when the sun was setting behind the big screen, and it was over 60 degrees - not too bad for Devil's Night.

Before the first movie, they screened a 35mm print of a 1965 Chuck Jones animated Tom and Jerry short.  The cartoon was called The Year Of The Mouse, and to say that it highlights how much things have changed in children's entertainment would be a massive understatement.
The story has Tom (the cat) trying to take a nap while Jerry (the mouse) and his friend Nibbles (another mouse) play pranks on him.  Perhaps you might be thinking that the pranks Jerry might pull would include things like putting Tom's paw in a cup of water, or tickling his nose with a feather, or maybe even setting off an alarm clock, but that's not what happened here.  Instead, the cute little brown mouse rigged up a series of pranks that caused Tom to shoot himself in the head with a gun and hang himself from the chandelier with a noose.  After two more pranks that involve a large knife and a bow and arrow, Tom catches on to what is happening and decides to get back at the mice by rigging up a trap that would have made Jigsaw proud. The cartoon ends with Jerry and Nibbles trapped in a glass bottle with a gun pointed at them.  The trigger is tied to a string with the other end fastened to a cork in the bottle, with the implication being that if either of the mice attempt to escape the trap, they will be shot and killed, thus allowing Tom to finally enjoy a restful nap.  Damn!
Say what you want about the violence in tonight's feature films, but they showed murder in a serious tone.  When I was growing up in the 80's, I probably saw Elmer Fudd shoot Daffy Duck a thousand times, and countless other acts of violence between cartoon characters.  Some of them were more tame than The Year Of The Mouse while others were more graphic, but the one thing all of them had in common was that they were played for laughs.  As an eight year old, I didn't think anything about it, but I've got to tell you, it's a real eye-opener to see them today.  Don't get me wrong, I certainly don't think they should be banned or anything like that, but my reaction has gone from laughing at the fate of poor Tom to saying "holy shit, they'd never get away with that today!" 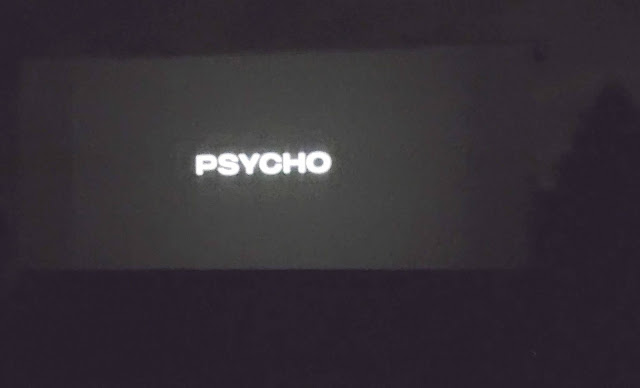 When I watch movies, I try to do my best to forget everything that I know about them.  That has become increasingly more difficult to do in 2021 with a seemingly endless stream of memes, references and parodies of anything that becomes popular, but it's even more difficult when watching one of the most iconic films in the history of cinema.  I'll bet that you could find people who have never heard of Alfred Hitchcock or Norman Bates, but if you let them listen to five second of the score that plays during the infamous shower scene, they would identify it.  They might not be able to say exactly where it's from, but they'll associate it with a murder, and could probably even narrow it down to a stabbing that takes place in the shower.
It's been decades since I watched Psycho all the way through from beginning to end, and I wanted to experience it at the drive-in from as fresh of a perspective as I could possibly get.  When I really get into the mindset to fully experience a movie, I have kind of a stupid little ritual that I do.  As the opening credits begin, I'll close my eyes for a few seconds and think to myself "tell me a story".  It's the words I'd use as a child when I wanted my grandfather to tell me a haunted house story on our drives to the mall in Wilkes-Barre or Frackville, and it's become kind of a centering device in my adult life.  Just close your eyes for a couple of seconds and try to forget who you are.  Forger where you are.  Forget everything that you know.  Forget all of the cynicism that has built up over the years.  Forget that the world outside this movie exists.  For the next 110 minutes, it is just you and the film.  Tell me a story.
Sometimes it works and sometimes it doesn't.  This time it worked, and it was amazing.  I will never forget the experience of seeing Alfred Hitchcock's masterpiece on the big screen under the stars. 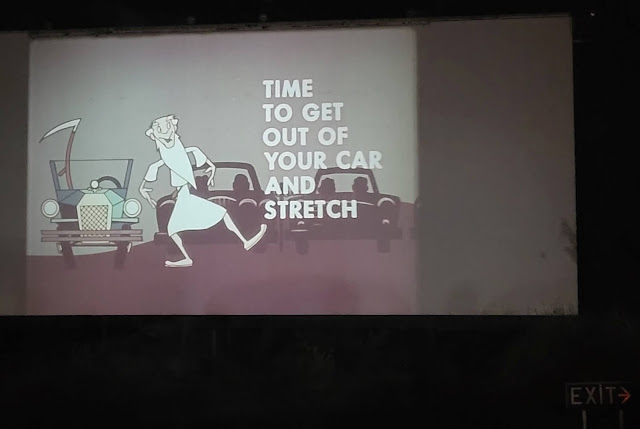 There were no special novelty items at the concession stand.  I suggested that they add some cheese or hot sauce to french fries and sell them as "Evil Fries Tonight" as a good way to sell off whatever excess french fries they have before they go on hiatus for the winter (hat tip to Jeff Whitmire who came up with the name), but I guess the concession crew didn't think it was as clever of an idea as I did.  Oh well, you can't win 'em all.

A vintage cartoon was once again screened on 35mm prior to the start of the second film.  This time, it was the 1966 Woody Woodpecker short: Rough Riding Hood.  This one didn't have quite as many gun and knife pranks, but it did end with Woody being spanked in the woods while he cries in the same cadence as his trademark laugh.  No kinkshaming here, Woody.  You do your thing.
Another thing that I think the Mahoning missed out on is capitalizing on the fact that they were screening Halloween II 40 years to the day after it premiered in theaters across the country.  I thought that it was pretty awesome that we're all getting to experience a horror classic from an original 35mm print that was screened exactly forty years ago.  There was one post about it a week ago on Instagram, but aside from that, it went completely unmentioned.  I guess these folks don't need marketing advice from a guy like me, but I can tell you one thing: I'm ever fortunate enough to run a drive-in theater and have the opportunity to screen an iconic horror flick on it's 40th birthday, you won't be able to shut me up about it. 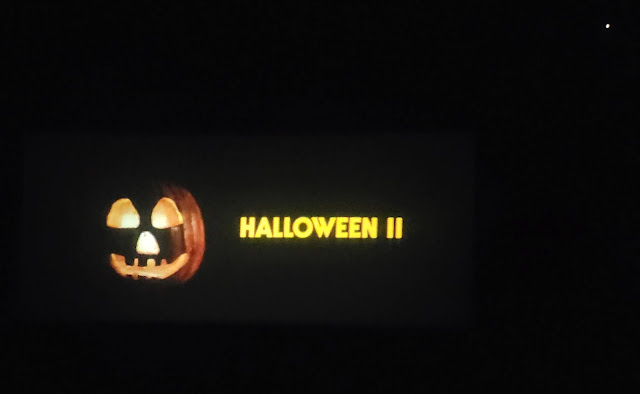 Like the most recent movie in the Halloween franchise, Halloween II picks up the story immediately where the first movie lets off.  The sequel definitely ramps up the brutality from the first film, and it's the film that has the "Luke, I am your father" moment when it is revealed that Laurie Strode is, in fact, Laurie Myers - the youngest sister of Michael Myers.  In this timeline, her parents died when she was two years old, and she was adopted and raised by the Strode family while Michael grew up in the sanitarium after he murdered his older sister.  This twist in the story was undone in the current Halloween timeline, which disregards Halloween II and treats the 2018 movie, also titled "Halloween", as the second movie in the series and a direct sequel to the 1978 film, in which Laurie Strode is not Michael's sister, unless you watched the version that aired on television in 1981, which has added scenes that suggest that she is Michael's sister.  If that sounds ridiculously complicated to you, just know that you're not alone.  I wish the current group of writers and directors would put their talents toward creating original stories with all new characters rather than to leech off of existing franchises to make a fast buck.  It's like the difference between opening a mom & pop restaurant with home cooked food, or opening a Denny's franchise and sticking a crane machine in the lobby to add your own twist on things.
Halloween II is a worthy sequel to the original film which was intended to close the book on the Michael Myers, as Halloween III took an entirely new direction with an awesome story about a Halloween mask manufacturer who uses technology and witchcraft to make the holiday evil again.  It's sort of a dark side twist on the "put the Christ back in Christmas" folks, because it's character wants to put the devil back in Halloween.  Unfortunately, it didn't perform as well as the studio hoped it would, so it was right back to Michael Myers for Halloween 4: The Return Of Michael Myers, which has been erased from existence by no fewer than three separate timelines, including the Rob Zombie reboot.
I realize that I've spent the past two paragraphs discussing everything except the actual movie.  It's a good flick, and I highly recommend it.  Just do yourself a favor - if you decide to have a Halloween movie marathon at home, stick to one timeline at a time or else the story isn't going to make a bit of sense. 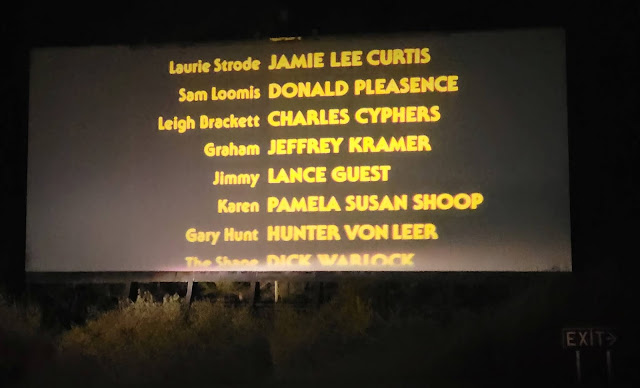 The credits rolled at about quarter past midnight, which meant that we started watching Halloween II on it's 40th birthday and finished in the early morning hours of Halloween.  There was a fun surprise to kick off the early morning hours of Halloween, but secret features are meant to be kept secret, so you'll just have to take a trip out to the Mahoning Drive-In Theater to find out about those for yourself.  And that's a wrap on the second to last night of the 2021 drive-in season.  One more night to go.