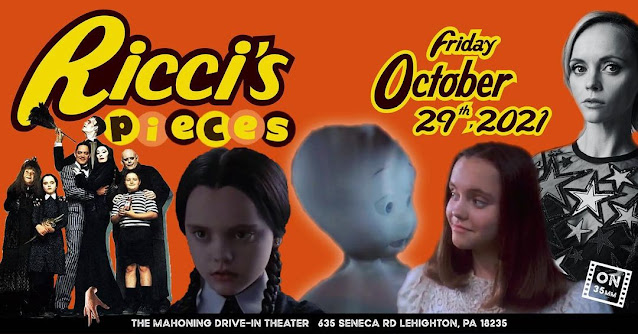 Ricci's Pieces
Mahoning Drive-In Theater - Lehighton, PA
I love when Halloween falls on a Sunday and turns the holiday into a three day weekend.  This year is even better than usual because it also means that I get to spend three more nights at the drive-in before they close their doors for the winter.  The first night is dedicated to family friendly spooky films from the 90's that include actress Christina Ricci - The Addams Family and Casper.
Christina Ricci was one of my favorite actresses when I was a teenager.  We got to see her at the drive-in last weekend too with Sleepy Hollow.  Even though she's known for her roles in spooky movies in the 90's, she's a tremendous actress with a wide range and a list of incredible films under her belt.  She's a couple months older than I am, so growing up parallel to her meant that the characters she played in films were my age as I was seeing them for the first time.  As a result, it's probably not surprising that she was one of my childhood crushes. 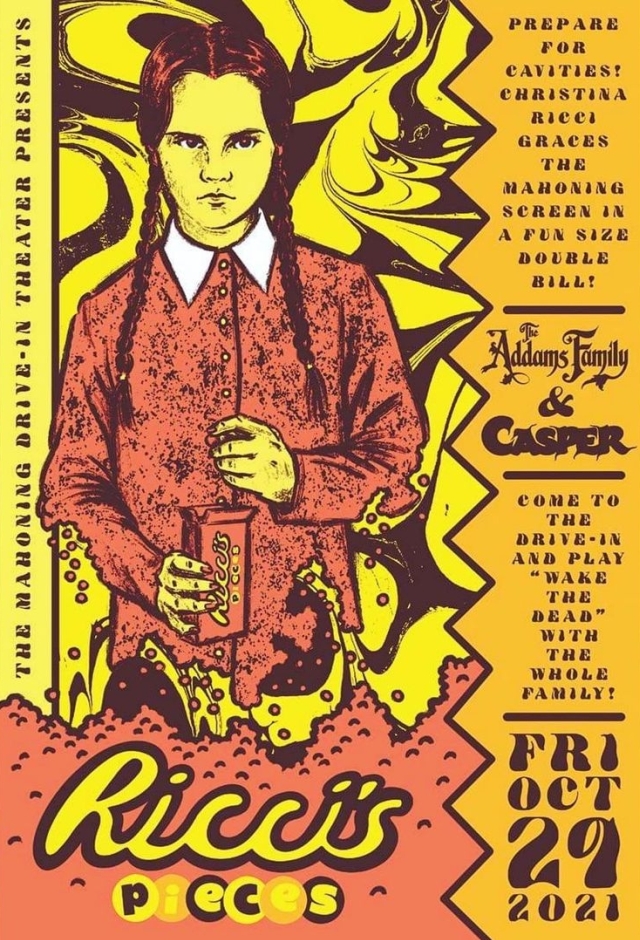 The show poster for Friday and Saturday was done by Tom Bifulco.  He's the same artist who did posters and t-shirts for a lot of shows that we've been to throughout the year, including Monster Mash, Frankenhooker, Cage Match, Joe Bob's Jamboree, VHS Fest, Honey I Shrunk The Kids, and our very first show at the Mahoning Drive-In Theater, Who Framed Roger Rabbit. 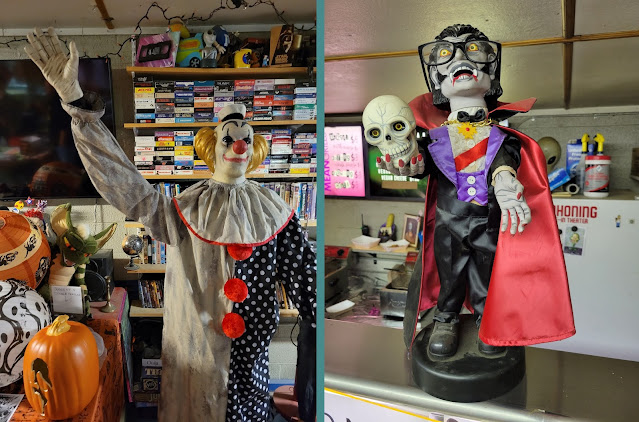 It rained pretty much all day on Friday, and it got pretty heavy before and during the first movie.  Unfortunately, this seemed to keep a lot of folks away from the drive-in.  The lot wasn't nearly as filled as I expected it to be for family friendly spooky movies on the Friday before Halloween.  Also, a lot of the events that the Mahoning had planned, like a "trunk or treat" for the kids, and a costume contest, had to be scaled back.  It was also a little difficult to see the decorations in the concession building because they had to move the merch table and the vendors inside.  Don't get me wrong - I still had a great time as always, but I'm sure that the folks in charge were hoping it would have turned out differently. 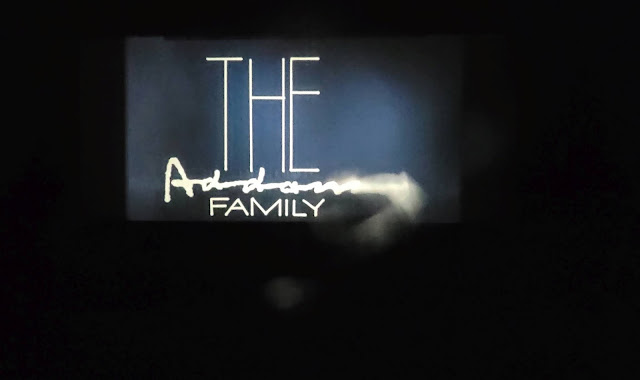 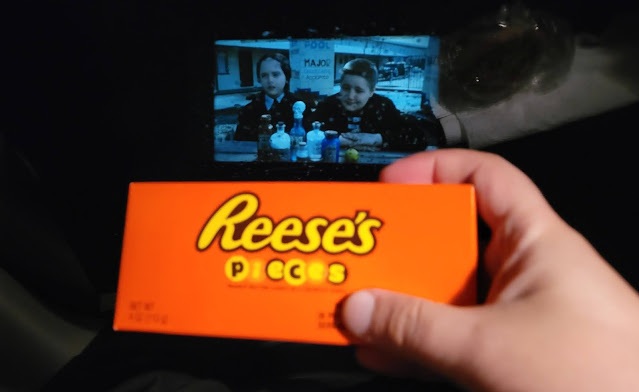 The first half of last night's double feature was The Addams Family from 1991.  I didn't get to see this in theaters on its initial run, but I did see it shortly after it was released on home video.  It's not a movie that I have watched very often over the past 30 years, but it aged very well and it's a hell of a lot of fun.  Raul Julia and Anjelica Huston are perfect as Gomez and Morticia Addams, and Christopher Lloyd delivers an amazing performance as Uncle Fester, showing once again that he is one of the greatest and most versatile actors of all time.
Back then, I was not at all a fan of the Addams Groove song that was used in the movie.  MC Hammer may have been a mega-star in my later elementary school days, but I really wasn't into him at all.  However, time has softened me on it because I had to smile and appreciate it for all of its cheesy goodness when I heard it during the closing credits last night.
One part of this movie that has lived on far longer than I think anyone expected is The Addams Family pinball machine.  It first appeared in arcades in 1992, and I swear, I think I've seen this game at a hundred different places in the years that followed.  It went on to sell over 20,000 units and is still to this day the best selling solid-state pinball machines of all time. 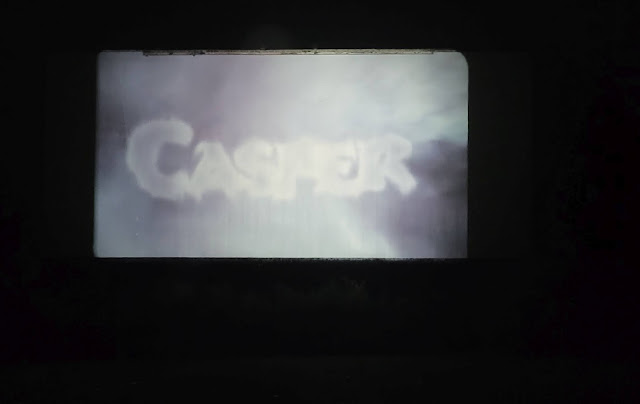 The second movie was the 1995 film, Casper.  It's a movie adaptation of the Casper The Friendly Ghost cartoon and comic book series that thrived throughout the 40's, 50's and 60's.  I didn't really have a lot of exposure to Casper growing up in the 80's and 90's.  Obviously, I knew the character existed, but I don't ever remember seeing any of the cartoons on television back then.  As a result, the movie flew completely under my radar, and I didn't end up seeing it until well into my adult life.  When I did finally see it, I was surprised to find that I loved it.  It's an incredibly sweet story with excellent performances from Christina Ricci and Bill Pullman, with a memorable cameo from Dan Aykroyd as the Ghostbuster who wants no parts of Whipstaff Manor or the Ghostly Trio.
Seeing Casper on the big screen at the drive-in, along with The Addams Family, was the perfect way to kick off Halloween weekend.  Tonight, we get a lot darker with a mother/daughter double feature of two of the most iconic horror movies of all time: Psycho and Halloween II.