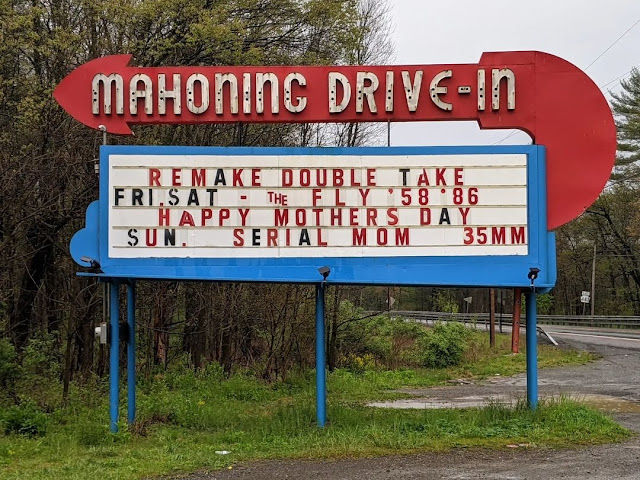 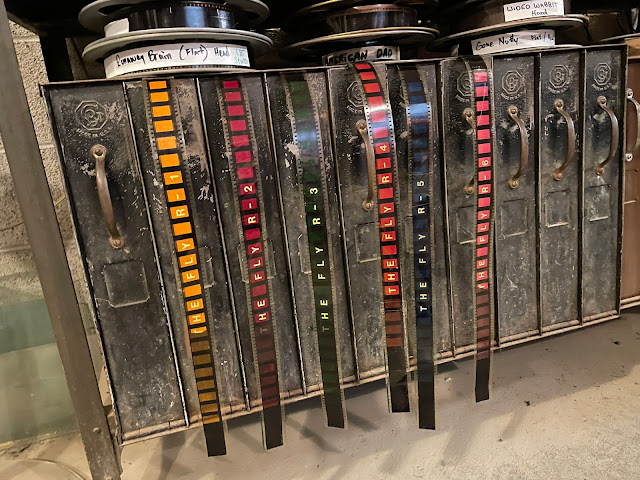 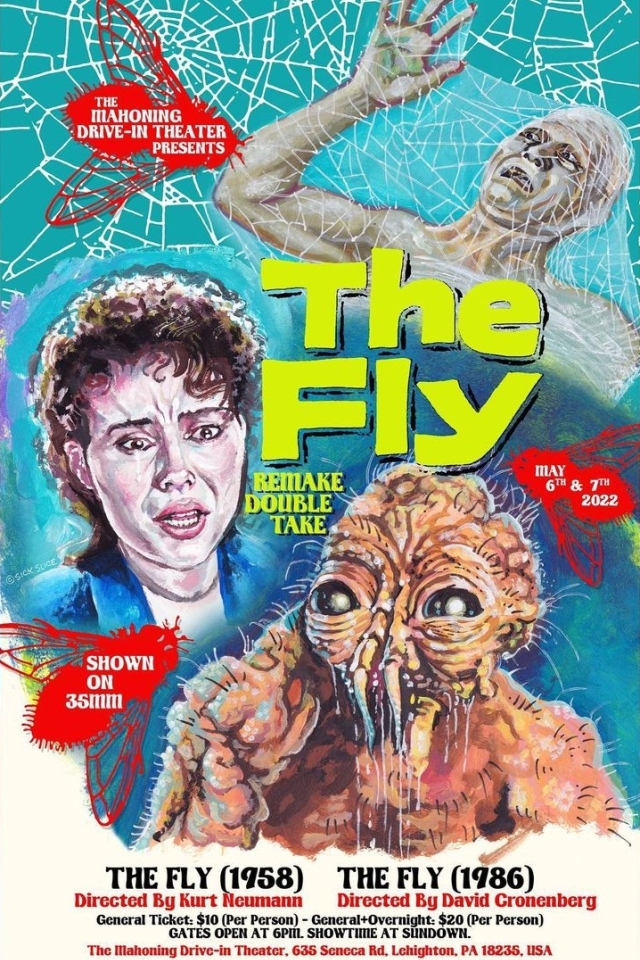 The poster for this weekend's double feature was designed by Hayden Hall of Sick Slice Studios.  This artist has created quite a few posters for shows at the Mahoning in previous seasons, including one of my favorite posters from last season, VHS Fest V. 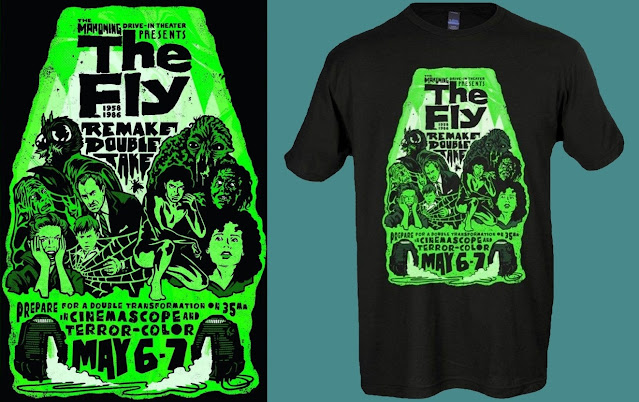 The Mahoning has so many incredibly talented artists who they've partnered with over the years, and Tom Bilfulco has been one of my favorites.  Last season, he designed artwork for Joe Bob's Jamboree, the t-shirt for VHS Fest V, and posters for Janet & Jamie, Ricci's Pieces, Universal Monster Mash V, Cage Match, Frankenhooker, Honey I Shrunk The Kids, and Who Framed Roger Rabbit, as well as posters and shirts for many other shows that we weren't able to get to.  For the 2022 Remake Double-Take weekend, he designed these awesome black and green t-shirts for The Fly. 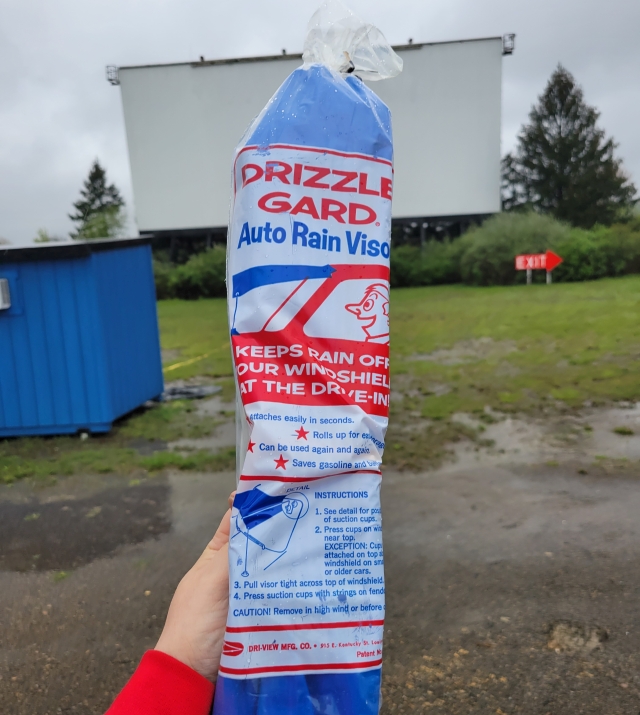 The Mahoning Drive-In Theater has a podcast that is definitely worth listening to for everyone who enjoys movies and the drive-in culture, even if you live too far away to make it to Lehighton.  One of the things they like to do during these podcasts is play vintage drive-in theater commercials in between segments of the show.  This is how I learned about a nifty piece of merchandise called the Drizzle Guard.  They were produced and sold during the 50's and 60's, and it's basically just a piece of tarp that's connected to some metal rods, rope and suction cups.  The idea is that you stretch it across the top of your windshield to help keep it dry when it's raining so that you don't have to run your car or the windshield wipers during the movie.
Apart from being a fan of drive-in theaters, I am also addicted to new old stock (don't even ask me about our coffee pot), so I had to track one of these down.  It wasn't too difficult, as there were a bunch of them on eBay, and I think I paid around eight bucks for this with free shipping over the winter.  Since we had a light but steady rain throughout the day, there was no better time to break this puppy out.

It worked out surprisingly well.  It doesn't keep the entire windshield dry, but it doesn't have to.  It kept the rain off of the top half of the windshield, which was more than enough of an area for both of us to see the movie without the rain obscuring any part of the screen.
This thing had the most durable suction cups I've ever seen.  We put this up at around 6:30 and it stayed in place through the entire night.  I'm not sure if it would hold up to a thunderstorm (in fact, the package flat out tells you to remove it in high winds), but it was definitely up to its intended purpose.  There was only one minor hiccup, and it was kind of amusing.

When the tarp collects enough rain water to weigh it down, it dumps the water down the center of the windshield.  This happened about once every 20 minutes, give or take.  The good news is that it always dumped directly down the center of the windshield, so the Drizzle Guard still did it's job of keeping the area of the movie screen dry even when it... um... climaxed.  It made me wonder if it would be possible to attach something else to the top of the windshield.  Maybe something like a rain gutter that's shaped in a slight arch to direct the water to the left and right of the car.
The only downside that I could find is that you have to sit up in the car for the Drizzle Guard to be effective.  If you bring pillows and put the seat back to recline and watch the movie, your field of vision is going to change and you'll be looking through the bottom of your windshield where the rain is still collecting.
All things considered, this is a pretty decent product.  It's not perfect, but not too shabby for a product that has sit unopened for the past sixty years.  I can only imagine how many different theaters, stores and warehouses this thing sat in before it found its way to me, but it's getting put to good use now.  What better way to enjoy a vintage film on 35mm than with a piece of vintage drive-in technology. 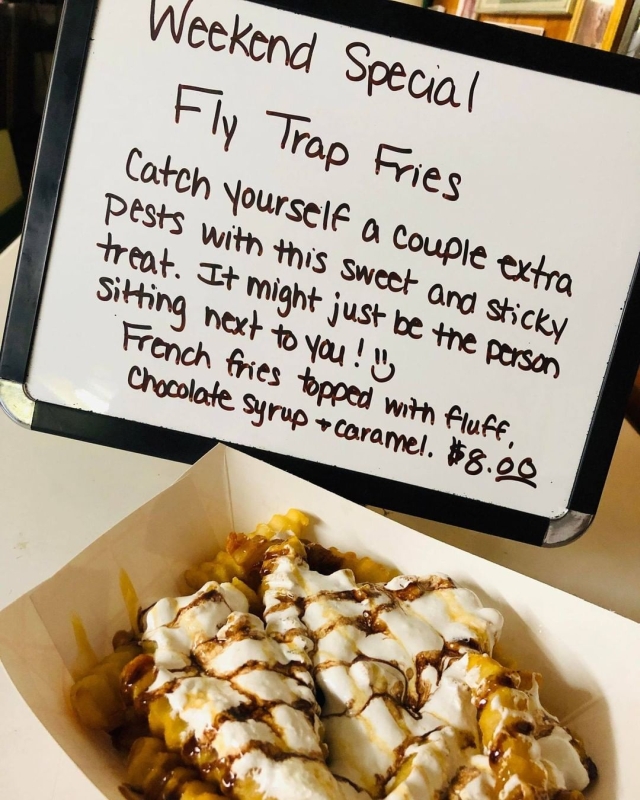 I think I have a pretty adventurous spirit when it comes to trying new things, but I had to pass on the Fly Trap Fries.  It's pretty hard to enjoy a double feature when you're in a sugar coma. 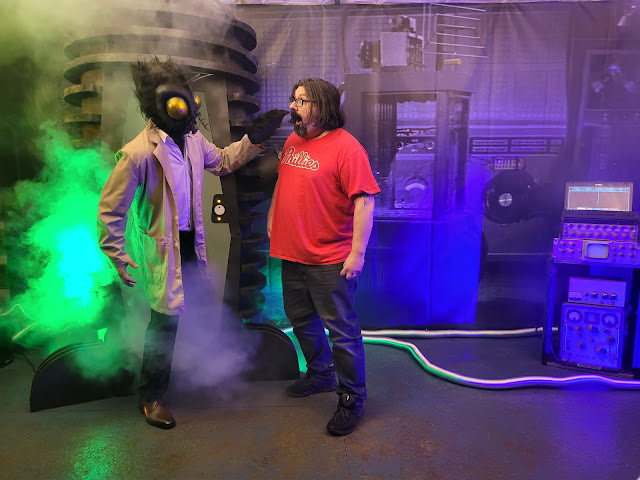 As always, the photo op at the Mahoning was incredible.  The incorporated elements from both the 1958 and 1982 films, and it all came together perfectly.  I can't imagine the amount of work it takes to put these together week after week. 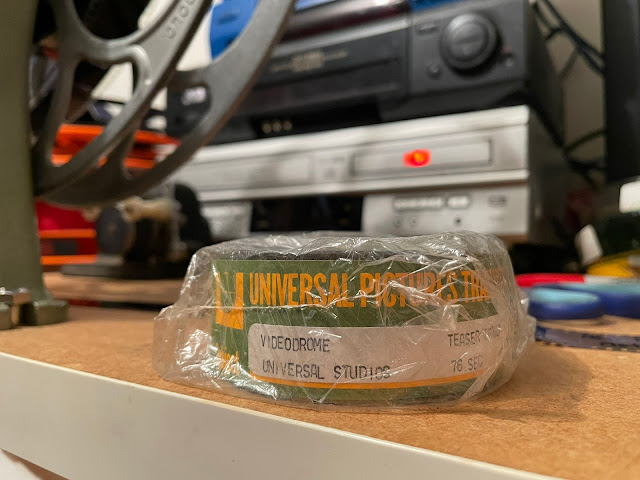 I wasn't the only one busting some new old stock free on Friday night's double feature.  Before the show, Rob announced that one of the previews that he would be screening for us before the first movie was a teaser trailer that has sit in its packaging, unopened and unplayed, for forty years.  It was for the David Cronenberg classic, Videodrome.  Long live the new flesh! 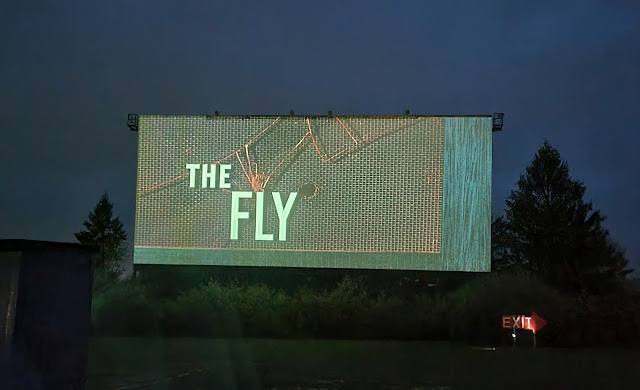 Neither my wife or I had ever seen the original 1958 version of The Fly, but we were both blown away.  It's an incredible movie, and the 1986 version so different that it's hard to even call it a remake.  This isn't like Coke and Pepsi with minor differences that you might have a hard time putting into words.  It would be more accurate to say that these are two completely separate films that are both a part of a fly-related teleportation genre.  That may sound ridiculous, but go ahead and watch the two of them back-to-back and tell me if you don't agree.
The only thing that they two movies have in common is that it involves a scientist who invents a teleportation machine, and he suffers ill effects after trying to teleport himself because a small housefly has entered the pod with him.  I realize that might sound like a lot, but it isn't.  Everything else about these two films is completely different - the plot, the tone, literally everything, and seeing these two movies back-to-back on the big screen really drives it home.  You can truly watch and appreciate each film as a unique piece of art. 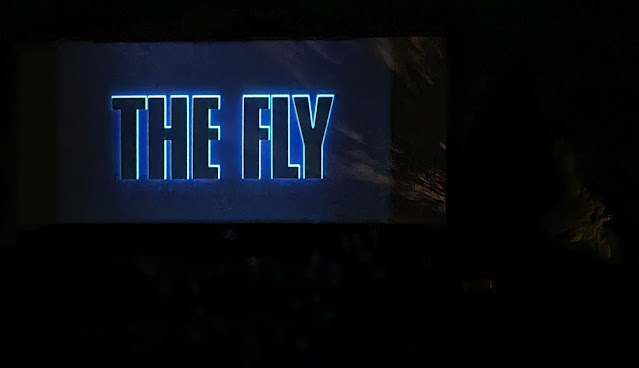 The David Cronenberg version of The Fly is one of my favorite horror flicks of the 1980's.  It's one of the many movies that I saw for the first time when I worked at Blowout Video as a teenager, and the Mahoning has once again made a dream come true of seeing it on the big screen.
This movie is absolutely disgusting for all of the right reasons, from Jeff Goldblum's body falling apart to his vomiting digestive enzymes as a weapon to dissolve the hand and foot of the Particle Magazine editor who has broken into his home to rescue Ronnie.  It's not gross for the sake of being gross.  It's relentless in its pursuit to tell the story that it wants to tell, and it's done with such intensity that it feels like the movie is daring you not to watch these scenes.  I didn't look away, and I never will. 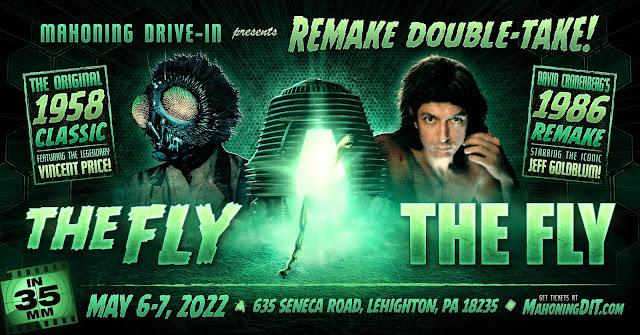 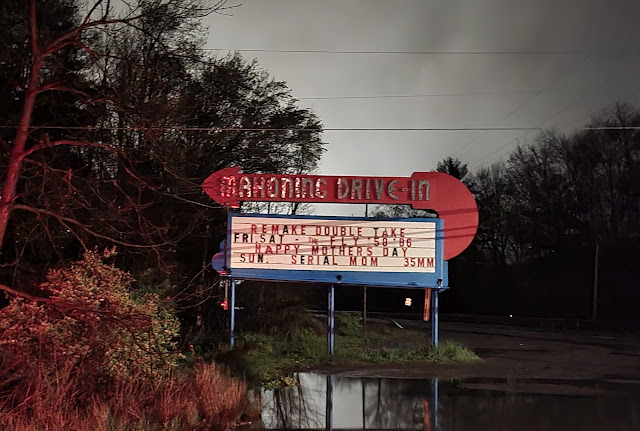 The season's just getting started and we already got to see five classic movies over three nights under the stars.  I wish I had my own teleportation device that I could use to pop onto the lot whenever I wanted.  I could disguise it as one of the port-a-potties with an out-of-order sign on the door.  In all seriousness, I consider myself extremely fortunate to have my health, to be financially stable, and to live close enough to this wonderful drive-in theater to be able to have so many amazing nights in front of its CinemaScope screen under the stars.