Let's Get Ready To Rumble 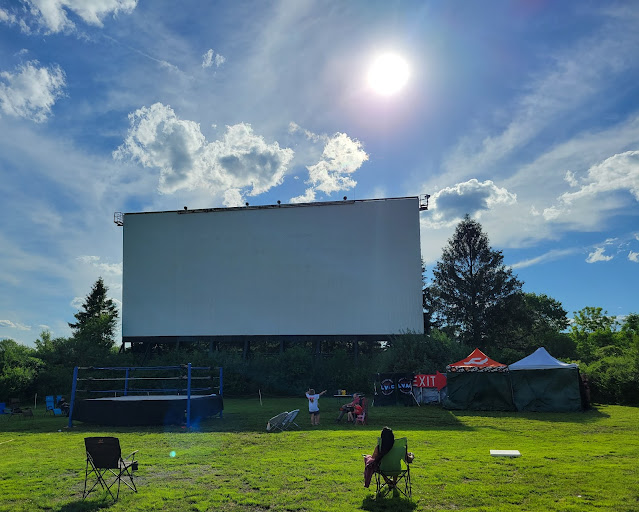 LVAC Reel Rumble III
Mahoning Drive-In Theater - Lehighton, PA
Originally, I was going to write about the events of Reel Rumble III in a single post, but the work put in by the talent in the Lehigh Valley Athletics Council really deserves to be written about separately from the movies.
I've been going to see independent wrestling shows throughout most of my adult life.  My first indy show was an IPW event in January 1999.  I was 18 years old at the time, and although I had been watching wrestling since I was five years old, I think that this event was the moment when I truly fell in love with professional wrestling as an art form.  It's the first time I ever really had a chance to talk to the wrestlers and to see the love and the craftsmanship that they put into their characters and the show.  It's every bit as much of a commitment to showmanship and athleticism as a sport like figure skating, but whereas that is put on a pedestal as an Olympic medal event, wrestling tends to be looked down upon by the general public.
Since attending that first IPW show over 23 years ago, I've lost count of the number of indy shows that I've sat in the crowd for.  It may very well be over a hundred at this point.  I've written about many of those shows here - not with star ratings for matches or anything like that, but just as a way to remember what a good time I had at the show.
Even though I've fallen a bit out of touch with what's going on in the local indy scene, the wrestling show that was held at the Mahoning Drive-In Theater before the movies on Friday reminded me of all of the reasons why I fell in love with live, independent professional wrestling.  Some of the folks who were part of the show were familiar faces that I've seen before, while some of the younger wrestlers were people who I was seeing for the first time, but all of them had the talent and the passion to deliver a hell of a fun show. 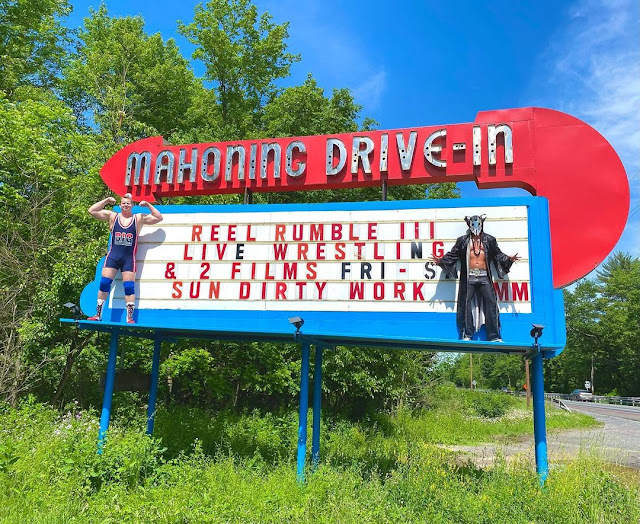 The man standing on the left on the marquee is Big Dan Champion.  I hadn't seen him before last night, but this dude is a charisma machine.  Throughout the match, he randomly flexes and shouts "Big Dan" at the crowd, which I know may not sound like the second coming of Hulkamania when you read it, but I'm telling you, this guy's tone and facial expressions make it work and he popped the crowd with it every single time.  Dude can get it done in the ring too.
The masked man on the right is Ultramantis Black, who I am definitely familiar with from when my wife and I used to go see Chikara shows back in the day.  According to the company profile on Cagematch.net, he is one of the three owners of the promotion, along with Havoc (who wrestles in LVAC as Merlok) and Chris Reject. 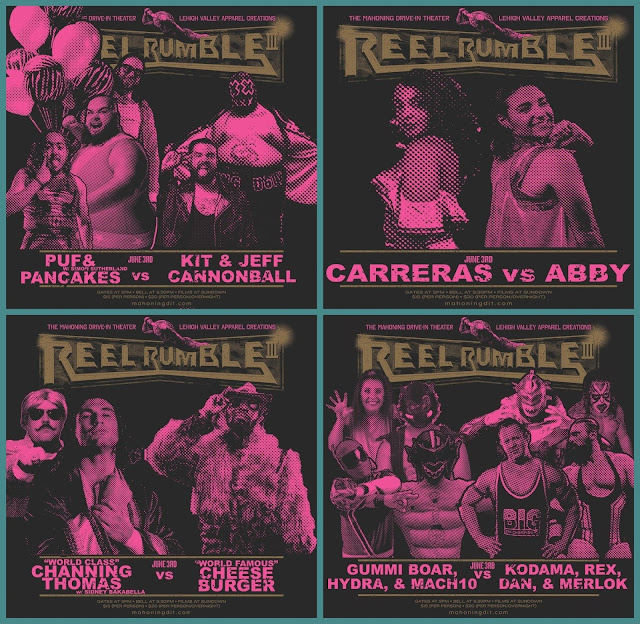 The LVAC had a wrestling ring set up in the grass underneath the movie screen, and there were four matches scheduled for the wrestling portion of Reel Rumble III that took place before tonight's double feature.  I haven't kept up with indy wrestling as closely as I used to, but there were still quite a few familiar faces working at last night's show.

The ring announcer was Louden Noxious.  His name was immediately familiar to me, but I couldn't remember where I knew it from.  It was only when I started writing this that it hit me: he was the commentator for Kaiju Big Battel.  I've never been to one of their shows, but there was a special attraction Kaiju match at the Chikara Anniversario show at ECW Arena in Philly that Angie and I went to 15 years ago. 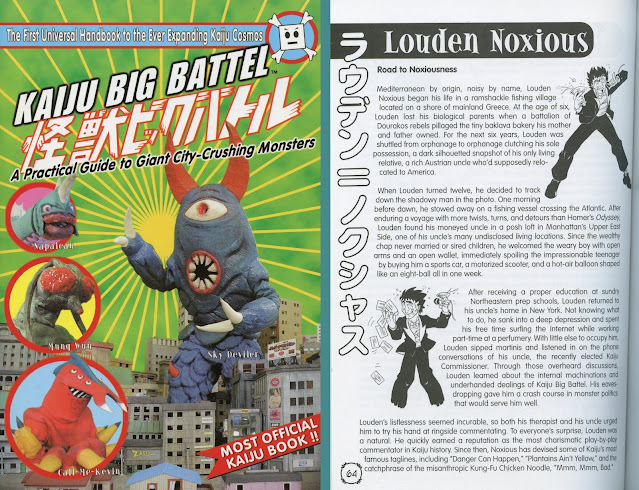 About ten years ago, Louden Noxious started working as a commentator for Chikara under the name of Gavin Loudspeaker, and now he's back to his old Kaiju name with the LVAC. 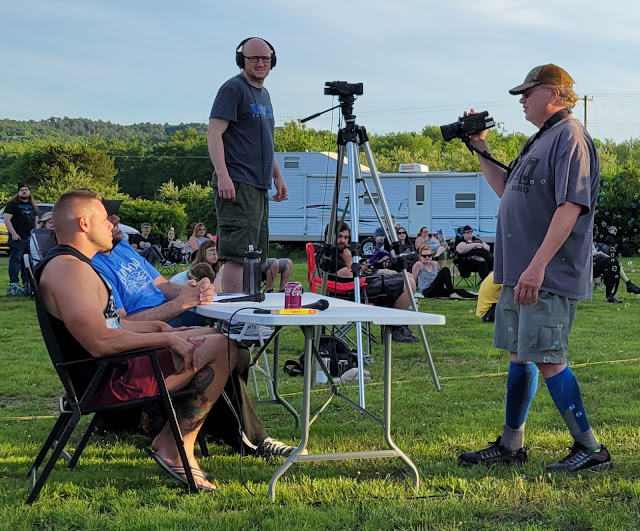 One of the folks who was doing commentary for this show was a wrestler named Avery Good (as in "a very good professional wrestler").  This name also was very familiar to me, but I didn't recognize him when I saw him at the show.  I learned later on that the reason I didn't recognize him is that he was wrestling under a mask for Chikara back in the days when we used to go to their shows.  At most of those shows I was at, he wrestled under the name Create-A-Wrestler.  Later in his career, he worked as Ultimo Breakfast and Dasher Hatfield, but his most memorable character for me was the one he wrestled as for Chikara Young Lions Cup V.
I've been watching professional wrestling since 1985, and the character that Avery wrestled as for the 2007 Young Lions Cup may have been the best masked gimmick I have ever seen: Moscow the Communist Bovine.  Seriously, just look at that!  This is one of the things that made Chikara so much fun!  I'm glad to see that the man behind the cow mask is still wrestling and doing well. 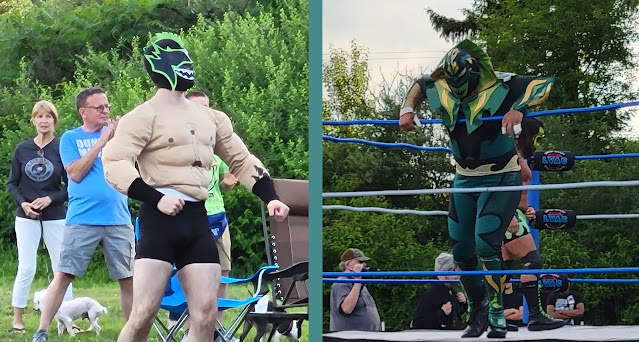 There were at least three other wrestlers on the card that I've seen wrestle at shows that we've been to before this weekend.  The man on the left in the inflatable muscle shirt is Hydra.  I remember him best as a member of The Order of the Neo-Solar Temple with Ultramantis Black.  Back in those days, he used to have The Hydra-lock Challenge where he'd put his opponent into a full nelson that they had to break out of.  His opponent was often twice his size, but they'd always play it up in a way that made a funny moment.
The man on the right is one of the co-owners that I mentioned earlier.  He wrestles as Merlok in LVAC, but he wrestled as Havoc back when I saw him at a PPW show in 2015.  He also wrestled quite a bit for WXW from 2001 to 2016, including a match at a 2013 show at the high school where my father used to teach.  In all likelihood, I saw him wrestle at a WXW show on Broad Street in Hazleton in the early 2000's.  I was friends with one of the referees who occasionally wrestled as Sammy The Freak, and I went to a bunch of shows on those days... even worked as timekeeper for one of them (the guy who rings the bell at the start and end of every match), but I don't remember all of the matches. 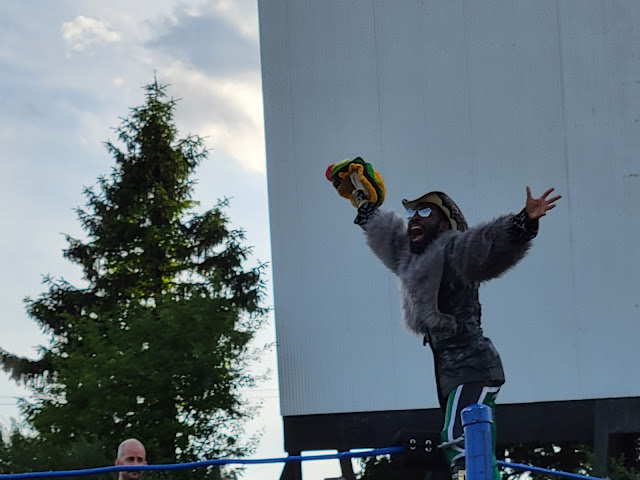 The last wrestler that I recognized from previous shows is The World Famous Cheeseburger.  I saw him wrestle for the first time at ROH Final Battle 2015 in Philadelphia.  In those days, he used to toss what a fast food cheeseburger into the crowd.  The fan who caught it showed it to me and it looked like it was a dog's squeak toy wrapped up in a McDonald's wrapper, with Cheeseburger's autograph on the bottom.  I thought it was a pretty genius idea... sort of takes the idea of the hot dog gun from the baseball park and applies it to professional wrestling.  He was incredible in the ring as well - the kind of cruiserweight that would have popped the crowd every week on Nitro back in the glory days of the WCW Cruiserweight Division. 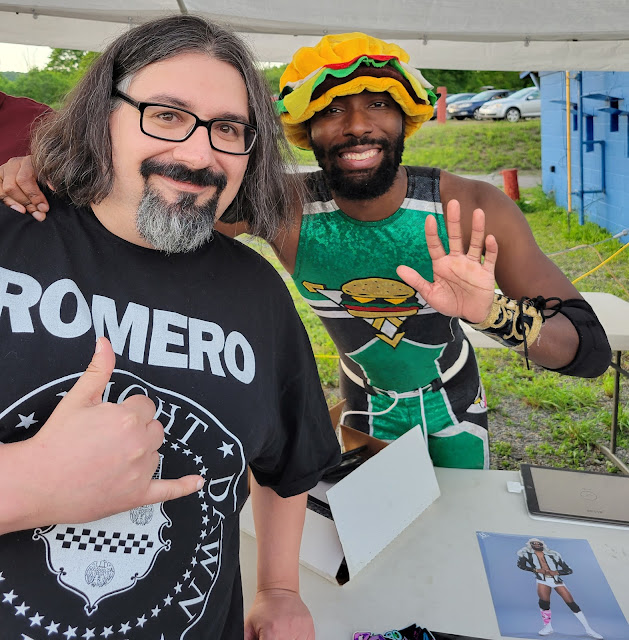 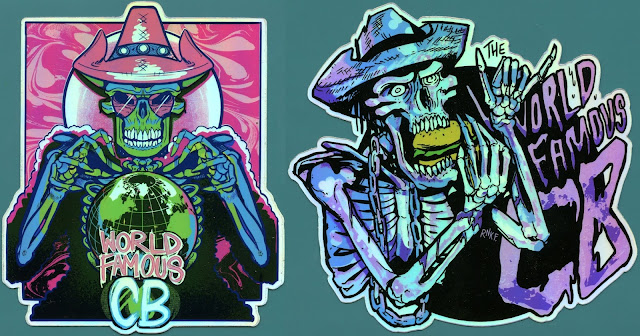 I got to meet Cheeseburger after the show at the merch tables, and he's a hell of a nice guy.  He had two pretty awesome stickers for sale, so I bought them for my Mahoning scrapbook. 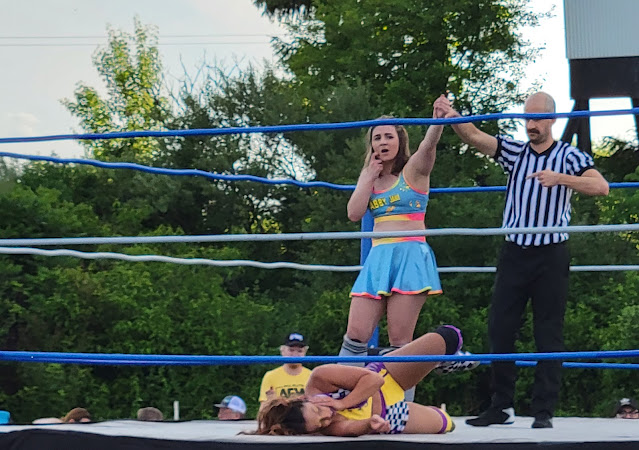 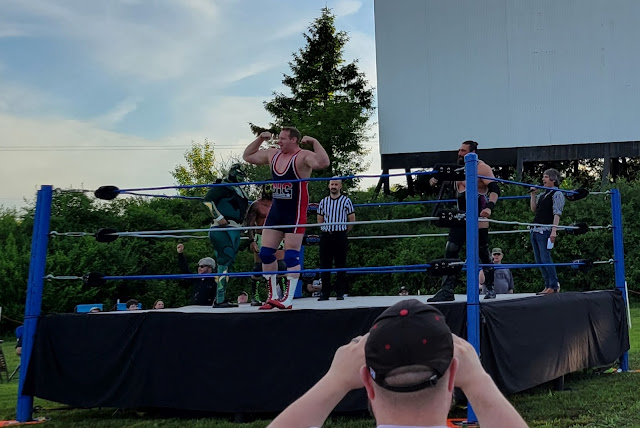 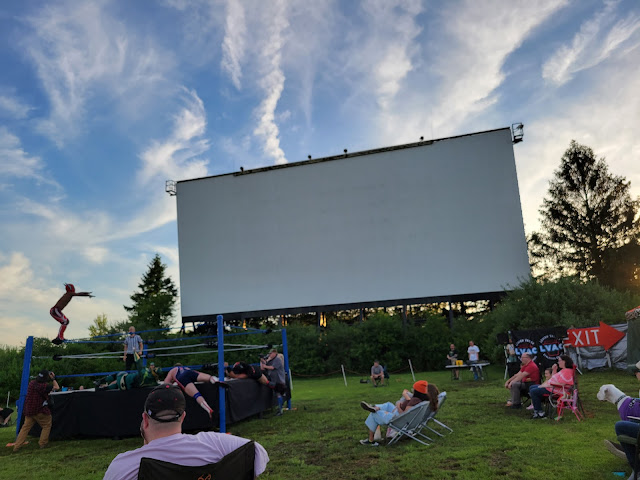 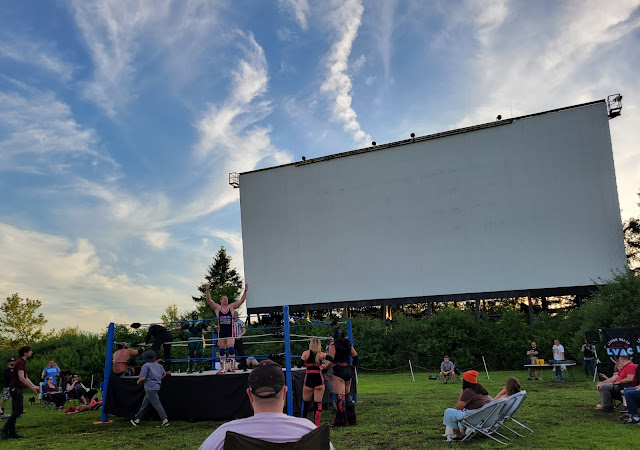 I may not have heard of LVAC before this weekend, but they won me over and I look forward to seeing more from them.
Results: