The Ram Knows How To Party Like A Fireman 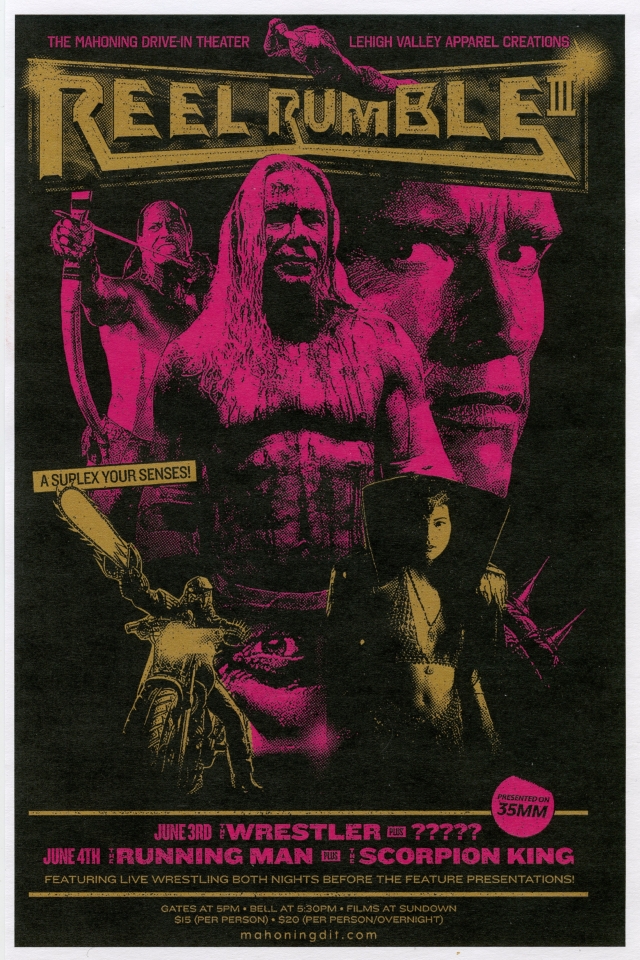 Reel Rumble III: The Wrestler / Secret Feature
Mahoning Drive-In Theater - Lehighton, PA
For the first and probably only time, a movie is being screened at the Mahoning Drive In that I actually appeared in.  Granted it's only for a second, and you have to pause the DVD at exactly the right moment, but if you look closely, I am in the crowd for the final scene of The Wrestler. 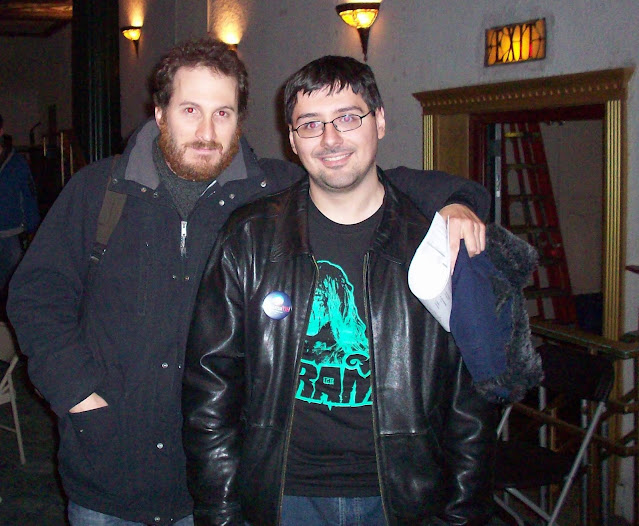 Good lord, look how thin I was back then!  That's me with the director of The Wrestler, Mr. Darren Aronofsky in Dover, New Jersey back on March 13th, 2008.  He could not possibly have been a more kind and welcoming dude.  I still have that shirt somewhere in my dresser, but there's no way on earth that it would still fit.  I'm pretty sure I put on about a hundred pounds since this photo was taken. 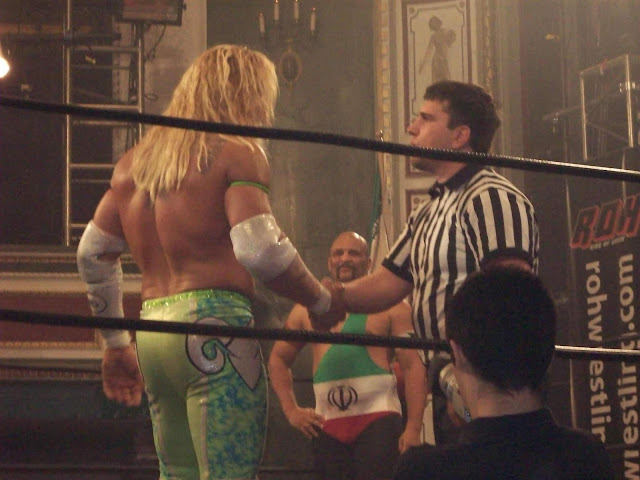 This was taken on the day of the shoot.  From left to right is the star of The Wrestler, Mickey Rourke, former WCW mainstay Ernest Miller, and the referee is a man named Jon Trosky, better known to fans of independent wrestling as Supreme Lee Great.

Jon not only appeared in the final scene of the film as the referee, but he also trained Mickey Rourke and Nicolas Cage, who was originally set to star in the film.  He still lives in the area and runs a wrestling school and independent promotion called The Sanctuary in Hazleton.  Since The Mahoning often has guests who appeared in and worked on the movies that are being shown, I tried to bring the two sides together.  Unfortunately, that didn't happen, but there were a lot of the wrestlers on the lot from the Lehigh Valley Athletics Council and they put on a hell of a good show. 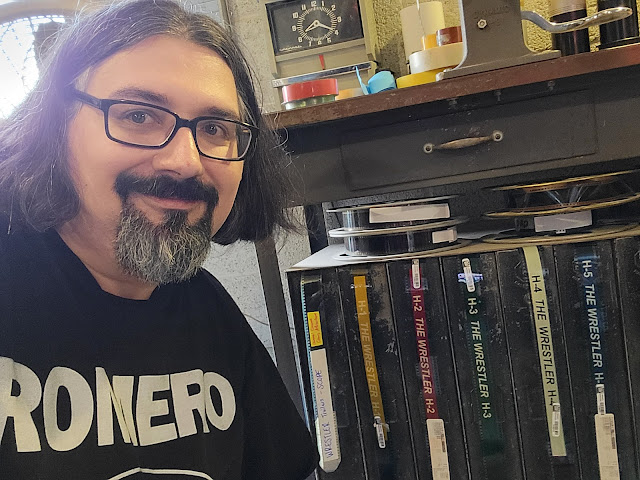 After the matches, I stopped in the projection booth because I had to take a cheesy picture with the reels from The Wrestler.  What can I say, I'm a nerd and I can't imagine that there will ever be another time when I am projected from 35mm onto the screen at the Mahoning, even if it is just as a crowd extra.
While I was there, Rob (the projectionist) mentioned that he graduated from high school with a woman named Lynn who played the pharmacist in the movie, and who is the daughter of one of the Wild Samoans.
I completely forgot that Afa's youngest daughter was in The Wrestler.  It took me a second after Rob mentioned this to piece it all together, but I actually knew her back in the day.  In the late 90's and early 2000's, Afa ran an independent wrestling promotion called World Xtreme Wrestling (WXW) and the Wild Samoan Training Center out of a building on Broad Street in Hazleton, PA.  For some of that time, I worked at a Family Dollar store that was just down the street from this venue, and some of the wrestlers would pop in from time to time.  This is how I met and became friends with a guy named Sam who worked as the referee while also training to be a wrestler.  He occasionally wrestled in shows as Sammy The Freak, often feuding or teaming with his storyline long lost brother, Jimmy The Geek.  I was sort of on the inside for a few months during that time.  I came into the building for setup and occasionally wrote up the match results for the website.  I even worked as the timekeeper once, and I spent the whole show paranoid that I'd forget to ring the bell after the match, or that I'd ring it at the wrong time, but the only person I ever hung out with outside of the venue was Sam.  He used to have an apartment over the old Carmen's Family Restaurant that I worked at when I was a teenager.
I wouldn't go as far as to say that Lynn and I were friends, but we did talk when we saw each other.  I remember that she invited me to her Sweet Sixteen birthday party, but I never ended up going.  She was still in school and a few years younger than me, so I would have felt like a creeper if I went.  Besides, I was never officially part of the gang.  Don't get me wrong, everyone I met always made me feel welcome, and no one ever questioned my being there, but it wasn't like I was training to be a wrestler or angling for a role in the company.  I was just friends with Sam and happy to be there and to lend a hand with something if I was needed.  Eventually, I got a job that took up more of my time than Family Dollar and I drifted away from WXW, but it's one of those things that I look back on in life and wish that I could do over again - preferably with a less socially awkward brain and a stronger ability to make and maintain friendships.
Wow, I really went off on a sidetrack there. 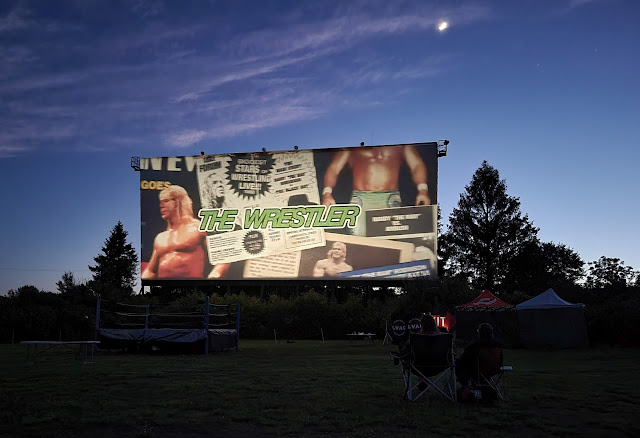 The first movie started at sundown, and I'm confident that even if you aren't a fan of professional wrestling, you would enjoy The Wrestler.  Angie and I were sitting with our friend Brittany who hasn't watched too much wrestling in the past, but who really seemed to love the movie.  I don't know if I'm qualified to say that it's a realistic look at the business of professional wrestling, but it sure feels like it to me.
After intermission, they screened the second half of the double feature.  It was a movie that I had never heard of prior to last night, but I can't go into too many details about it.  It was announced to the public as a secret feature, and the only hit that was given to the public is that the movie was related to wrestling in some way.  In other words, it's either about wrestling or has one or more wrestlers acting in the movie.  We were asked by the folks at the Mahoning to keep the names of the secret features a secret, so the only thing I'll say is that it reminded me a bit of This Is Spinal Tap.  It had a few very funny moments, but there were parts that drug on for a little bit.  I liked the second film a bit more than Angie or Brittany, but it's one of those movies that falls into the category of "I'm glad I got to see it, but I don't really want to see it again". 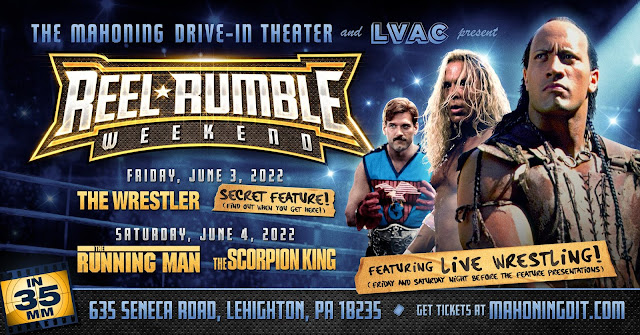 We didn't get tickets to the second night of Reel Rumble Weekend because we had just seen The Running Man last year at The Mahoning during Drive In Apocalypse.  If I knew then what I know now about LVAC, I probably would have bought tickets if for no other reason than to see the wrestling.  I'm sure it's going to be a good time, and I can guarantee that I'll be there for next year's Reel Rumble event.