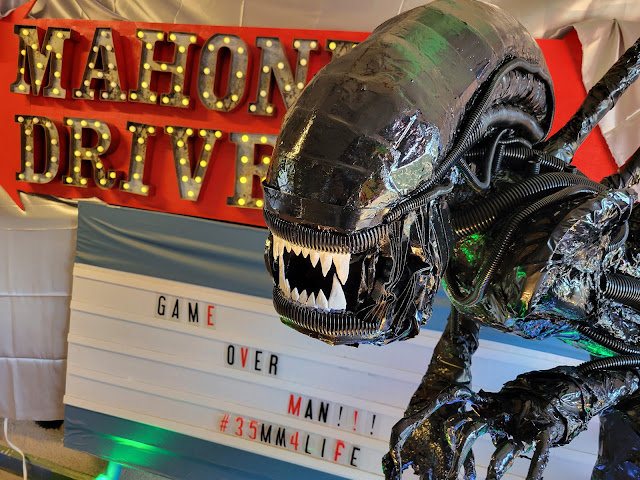 Aliens
Mahoning Drive-In Theater - Lehighton, PA
A little less than a month ago, we got to see the Alien, the 1979 Ridley Scott classic, during a Tunnel Vision Tuesday screening at the Mahoning Drive-In.  For last night's Tunnel Vision Tuesday, we saw a 35mm print of one of the very few examples of a sequel that improves on the original - the 1986 epic film written and directed by James Cameron: Aliens. 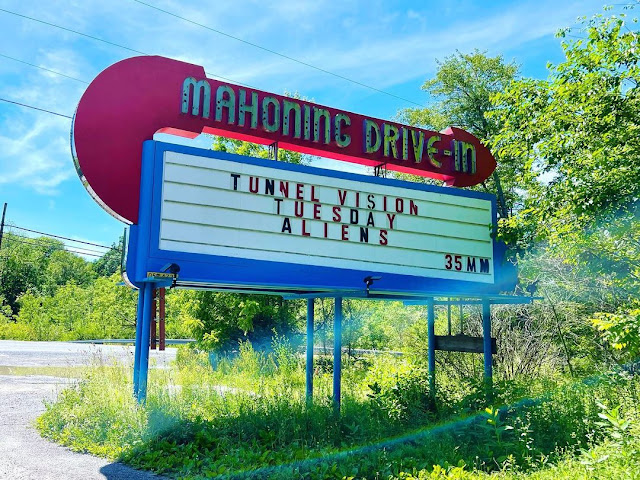 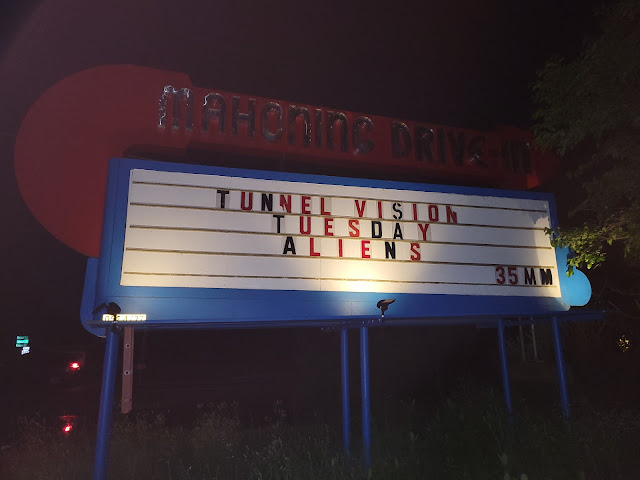 When we got to the entrance, the dude who scanned our ticket mentioned that he saw us there every day that he worked this year, and he asked "how many consecutive shows is this for you?".  It really hadn't occurred to me, but last night makes five in a row.  We were at last week's Tunnel Vision Tuesday, which was Dolemite, and both nights of Catherine & Kelli Save The World on Friday and Saturday, and Batman on Sunday.
I know this probably seems excessive to most folks, but here's how I see it:  There have been many people, places and things over the course of my life that have come and gone, and when I look back on them, one of the thoughts that repeatedly come back to me is that I wish I would have spent more time with them when I had the chance.  I'm talking about everything, from the death of my grandfather, who was the most important person in the first 30 years of my life, to something as trivial as the closure of a restaurant that I liked.  You can't change the past, and you can't go back in time, but you can try to experience as much happiness in the present as possible.  I am fortunate enough to live reasonably close to the Mahoning Drive-In Theater.  I am even more fortunate to have a steady job with hours that allow me to go to pretty much any movie they show.  I'm also lucky to be married to a woman who I truly love who enjoys movies and the drive-in as much as I do, and we have a sweet, well-behaved pup who wags his tail like crazy every time we tell him that he's coming with us.  So that's why I keep coming back here as much as I can.  For about $25 bucks (give or take), I get to spend a nice relaxing evening out under the stars, surrounded by like-minded nerds like me and with my family beside me while we listen to good music, eat some food, talk, and then watch movies.  Pretty good deal if you ask me.
If the pandemic has taught us anything, it's that literally anything can happen and nothing in this world can be taken for granted.  Maybe another solar farm comes along who isn't as respectful of what this place means to us.  Something could impact my health, or my wife's health, that could prevent us from going to the drive-in or from being able to enjoy it the way that we can today.  Something could happen with our jobs or with the economy in general to where we couldn't afford to go to the drive-in, or something could happen where it couldn't afford to stay open.  Remember, it wasn't too long ago that there was a Blockbuster Video in virtually every town in America, and today, they're all gone.  Hell, it wasn't that long ago that there were thousands of drive-in theaters across the country.  The same can be said for countless other things that we were all sure would last forever, because why wouldn't they?  Then you blink your eyes and it's gone forever - just a meme that people share when they want to reminisce about the past.  I hope that never happens to the Mahoning Drive-In Theater, but if it does, I want to look back and say that we experienced as much of it as we possibly could. 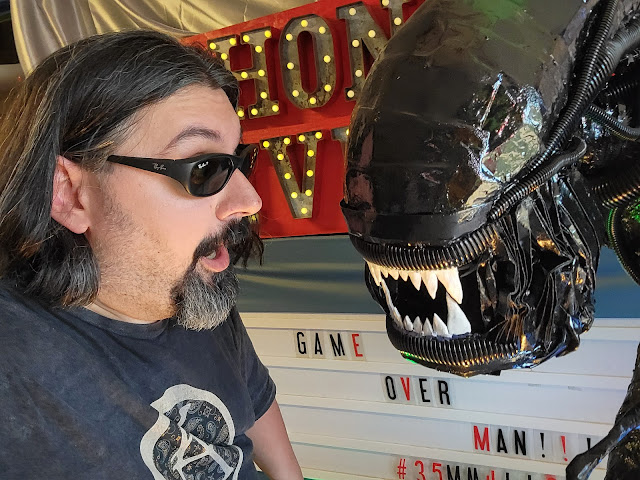 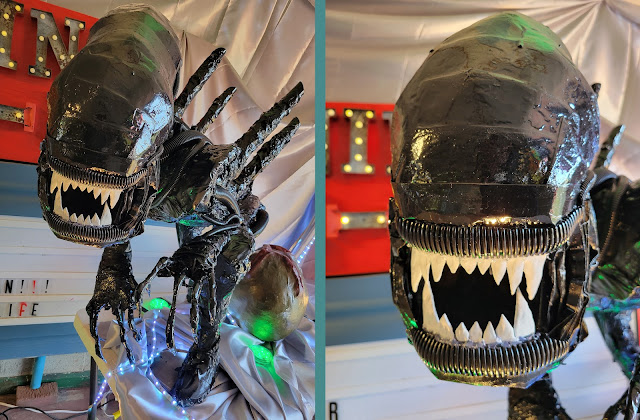 This incredible Xenomorph was built by Zeneca and Jason.  We met them last season not long after Joe Bob's Jamboree, and they are both incredibly kind and talented people.

The folks who run the Mahoning Instagram posted a newspaper clipping from when Aliens was shown at the drive-in during its initial theatrical run.  It was the second half of a double feature with Critters over a three day weekend, from September 19th through the 21st, 1986.  Naturally, this inspired me to do a little digging to see which newspaper the Mahoning used to advertise their showtimes, and I found that it was in The Morning Call.  I think my project this winter might be to go through the archives to find the movies that were shown at the Mahoning though the years.  It might make for an interesting subject for a set of trading cards. 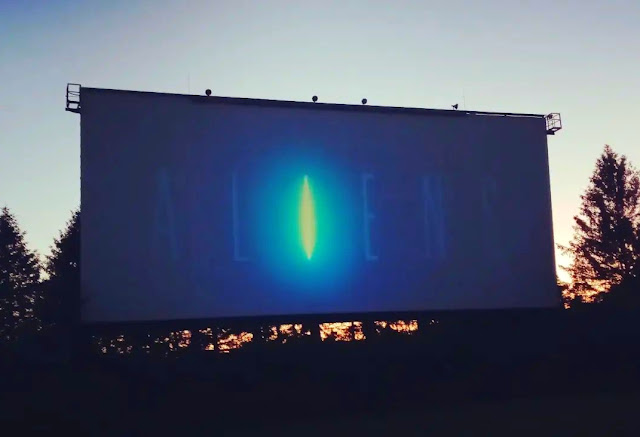 I didn't manage to catch a photo of the title screen, but this one was posted by Brendan In Jersey.  He writes for a blog called People Talking Whatever, which is a far more nuanced collection of movie reviews than anything you're likely to find here.  Check it out. 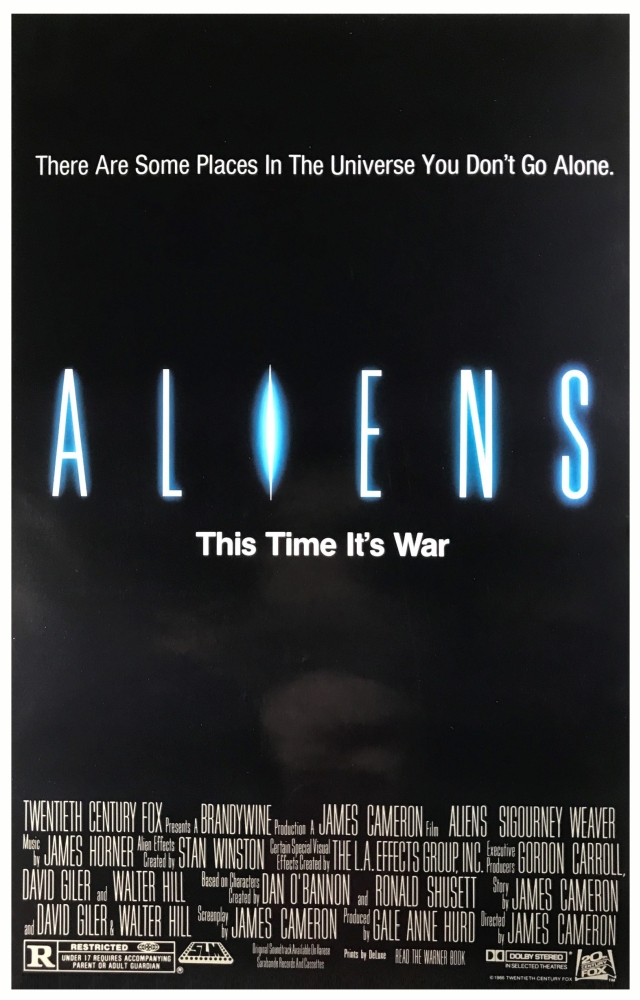 The blockbuster hits always bring out big crowds at the Mahoning, and Aliens was no exception.  The only time I can remember ever seeing the lot this full on a Tuesday was last June when another sequel that surpasses the original was shown - Terminator 2: Judgment Day.  Unfortunately, there was a group of newcomers who either didn't know or care about drive-in etiquette who wouldn't shut up for the first third of the film.  They were several car lengths away, but I heard every word as clearly as if they were sitting on my lap, and the conversation was about as intelligent as what you might expect in a junior high school lunchroom.  Thankfully, someone marched out of the booth at some point to tell them to quiet down and they had enough good sense to listen.
Aside from that minor issue, it was an incredible night at the drive-in; warm with a clear and star-filled sky, which always has the effect of enhancing a movie set in space.  As much as I love the Alien franchise, I don't tend to watch them very often, so this was the first time in over a decade that I saw Aliens, and since it premiered just a few weeks after my sixth birthday, I never got to see it on the big screen before last night.  No matter how many times I come back to this place, I still drive away in awe of the fact that I got to see a film that I'd only ever seen before on VHS or DVD projected from a 35mm print on the big screen at a drive-in.  It never ceases to amaze me, and it never will.