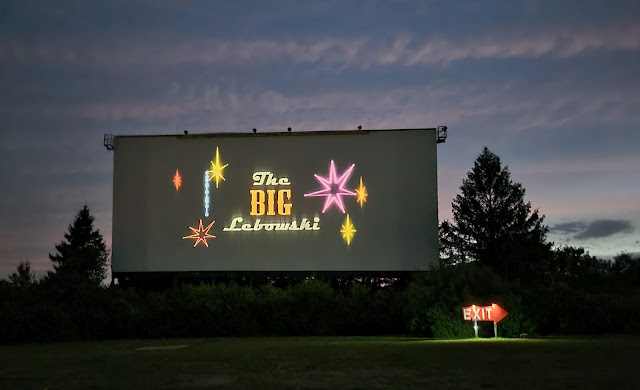 The Big Lebowski
Mahoning Drive-In Theater - Lehighton, PA
This was a truly special experience for me.  There are no words that can do justice to how much I love The Big Lebowski.  The night all came together perfectly, which is not something that I expected that afternoon. 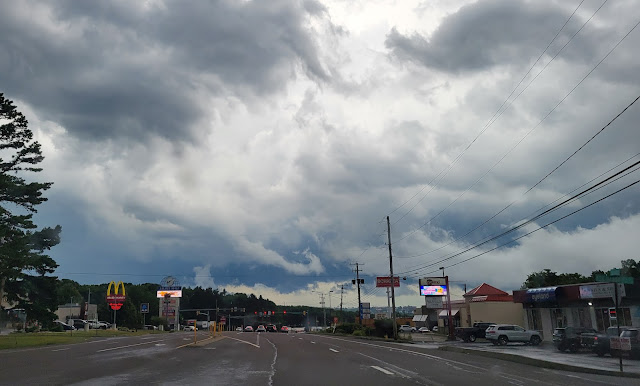 There was a light drizzle when I left the office, but by the time I passed the Wilkes-Barre exit, it was a torrential downpour.  There was no thunder and lightning, but there was more wind and rain than I have ever had to drive through.  I couldn't even see the road in front of me.  All I could see was the four-way lights of the truck in front of me, and random tree branches and leaves that were breaking off and blowing into the Interstate.  It stopped raining by the time I got back to Hazleton, but the clouds were still pretty ominous, so I was thinking that this might be a night that we'd be stuck in the car at the drive-in, but it was sunny and dry in Lehighton.  It seems like the storm swung north and avoided the drive-in entirely. 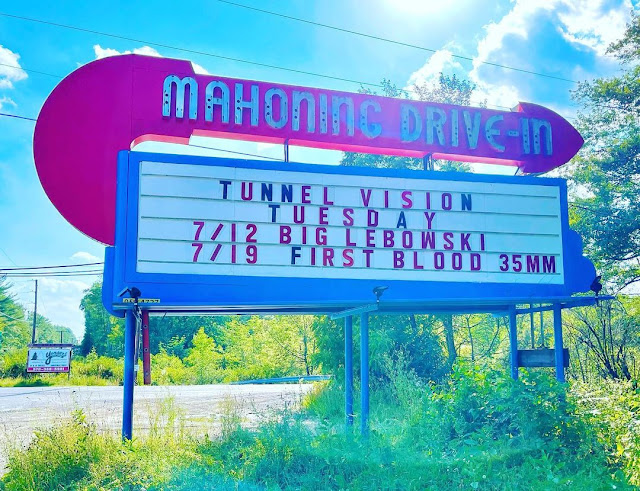 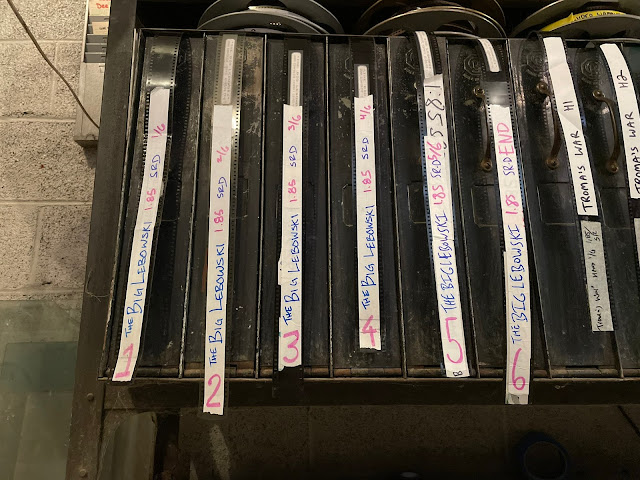 The Tunnel Vision Tuesday events this season have been outstanding.  Before last night, we've gotten to see Alien, Aliens, Predator, Dolemite and Prince Of Darkness on Tuesday nights, and that list would have been longer if it weren't for a few concerts that kept us from hitting up the drive-in.  It's only June, so there's plenty of other Tuesday nights at the drive-in to go!
I didn't expect to have the opportunity to see The Big Lebowski at the Mahoning when this season began.  They showed it in a double feature with Fear & Loathing In Las Vegas a few years before we discovered this place, so I figured I was out of luck with this one.  Thankfully, Exhumed Films brought it back to the Mahoning, and judging by the size of the crowd, I'm guessing that it'll be back again at some point in the future. 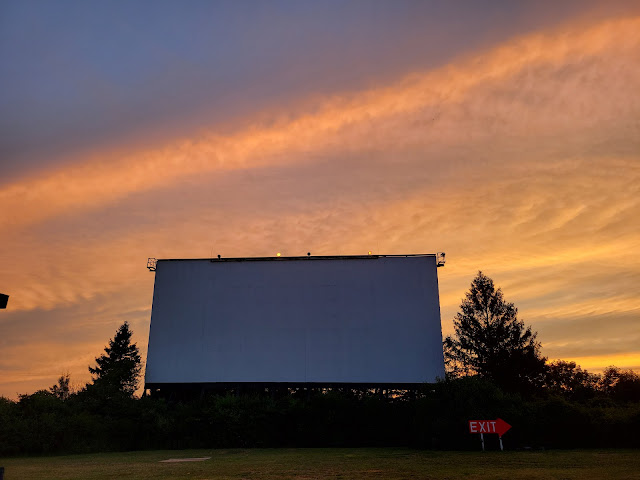 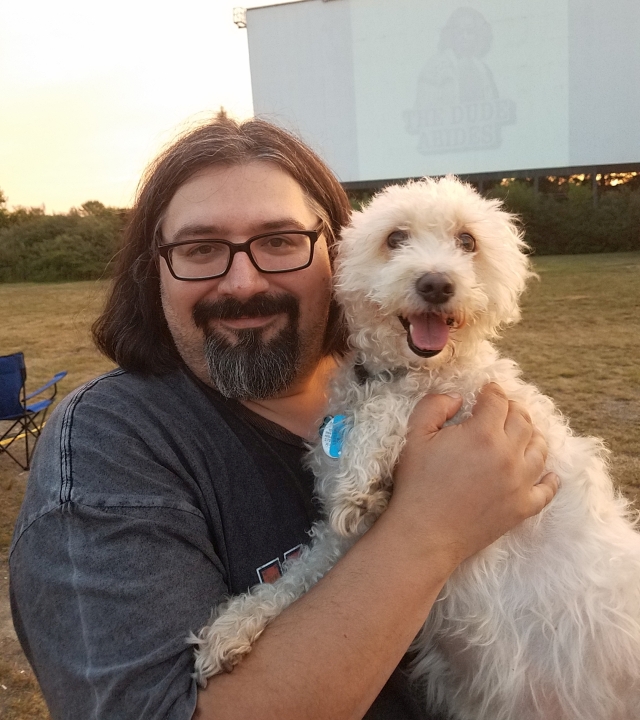 Nothing makes a night at the drive-in better than when we bring our little buddy with us, especially when the weather was as nice as it was.  Harvey got a couple of nice, long walks and was super excited to meet some new doggie friends on the lot. 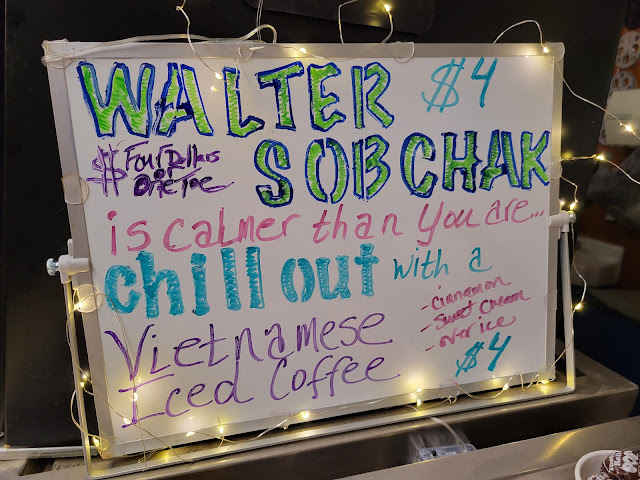 The special themed item at the concession building really came in handy this time.  It was the Walter Sobchak Vietnamese Iced Coffee, made with sweet cream and cinnamon.  Since I wasn't willing to give up a toe, I forked over the four bucks for a cup.  I got a lousy night's sleep last night, so this was just what the doctor ordered to make sure I'd stay awake throughout the feature and the drive home.
The food came courtesy of my dad.  He stopped at the Tomato Pie Cafe in Lititz over the weekend and picked up a tomato pie for me.  These are one of my favorite things in the world to eat, and it was perfect meal on a warm summer night. 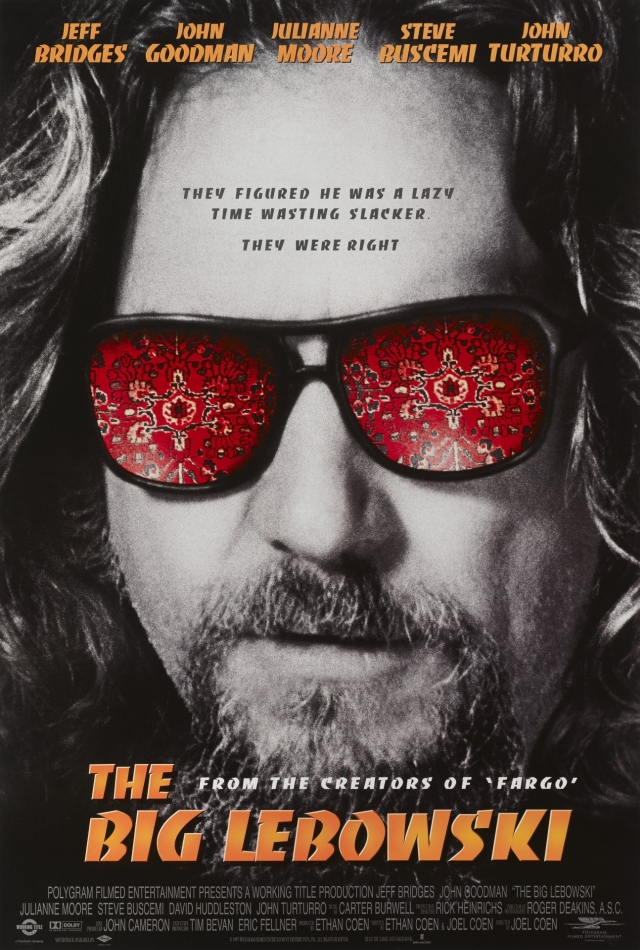 What can I say that I haven't said at least a dozen times this year alone?  The Mahoning Drive-In Theater makes dreams come true.  I missed out on seeing The Big Lebowski during it's original theatrical run in 1998, and I didn't catch on to the greatness that is The Dude until the mid 2000's on home video.  I didn't think I'd ever get to see it on the big screen, and when the storm came yesterday afternoon, I didn't think I'd get to see it from my camping chair outside on a warm summer night, but it all worked out in the end.  Sometimes you ear the b'ar and sometimes the b'ar eats you.