Jesus Is A Wawa Man 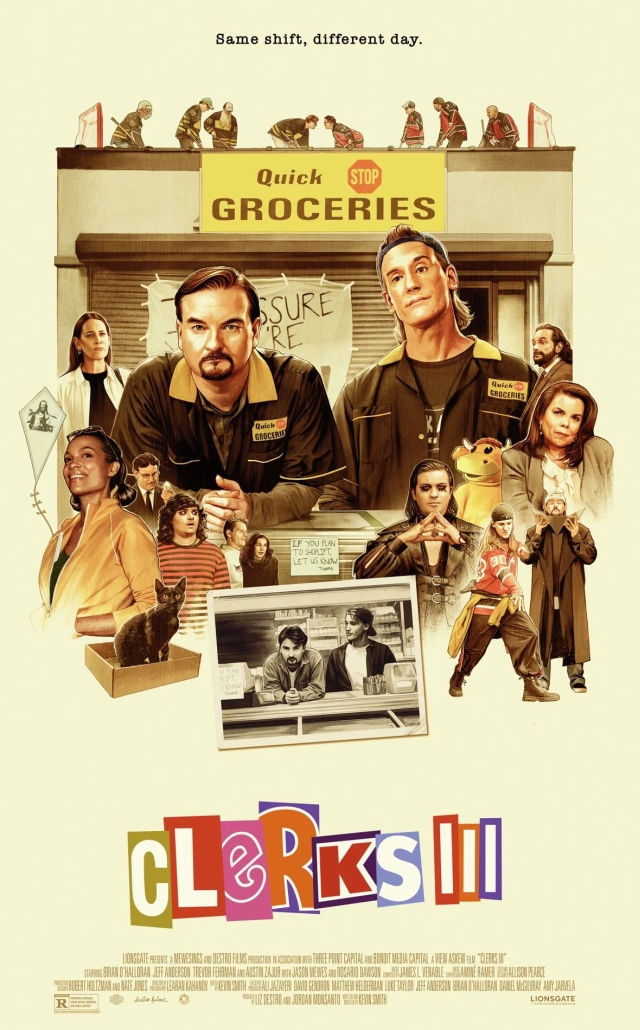 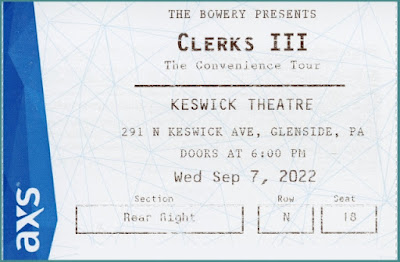 Clerks III
Keswick Theatre - Glenside, PA
When I was 15 years old, I rented a comedy flick about two kids who spend their day at the mall to try to reconnect with their girlfriends who had just broken up with them earlier that morning.  It had a lot of laughs and quotable lines, and it featured comic book legend Stan Lee and two funny side characters named Jay and Silent Bob.  That movie was called Mallrats, and it came up in conversation every time my friends and I would talk about movies.  On one such occasion, someone told me that Jay and Silent Bob were in a movie called Clerks that had come out before Mallrats, and that the movie I saw was sort of a prequel because it also takes place in the same New Jersey town and it references the death of Julie Dwyer in a swimming pool.  I rented Clerks the next time I was at the video store, and it was on that day that I became a huge fan of Kevin Smith.
In the years that followed, I saw the View Askewniverse movies in theaters as they were released.  I met the woman who would become my wife, who was also a big fan of Kevin Smith.  A couple of months before she and I started dating, we took a road trip to the Quick Stop and RST Video stores in Leonardo, New Jersey - both of which were the filming locations of Clerks.  We also stopped at Jay & Bob's Secret Stash, which was Kevin Smith's comic book shop in nearby Red Bank, New Jersey where we saw some of the costumes and props that were used in his films.
A few days before we officially became a couple, Angie and I went to see Clerks II at Cinemark on its opening weekend.  I can't remember a time when either of us laughed that hard in a movie theater, except maybe when we saw Zach & Miri a couple of years later.
Fast forward 16 years and the twenty-something kids who went on a date to see Clerks II are now the 10+ year married couple who went to see Clerks III.  It's not going to be released to theaters until September 13th, but it was screened for View Askewniverse fans the historic Keswick Theater in Glenside, Pennsylvania as a part of the Clerks III Convenience Tour, and Kevin Smith himself was there to host a Q&A with the fans after the movie. 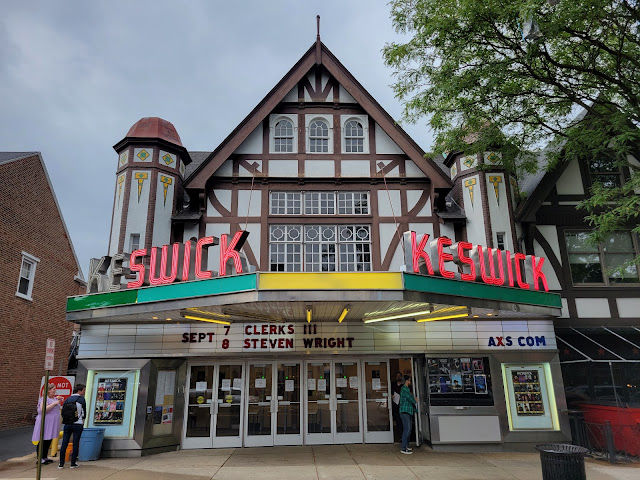 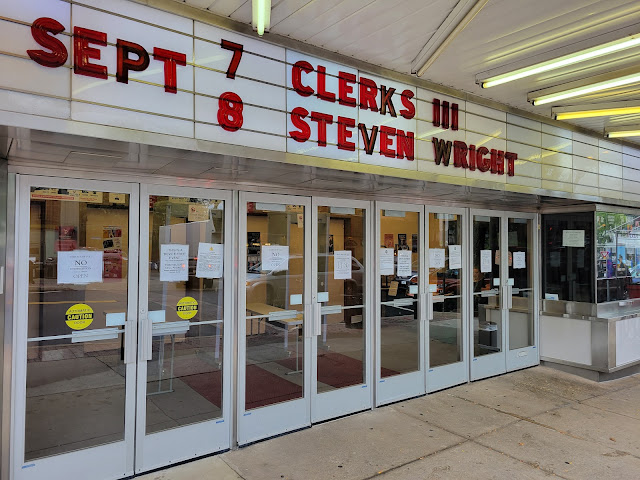 If I had known Steven Wright was going to be there the next day, I might have put in for a little vacation time at work.  He's hysterically funny!  We got to see him once at Penn's Peak in Jim Thorpe when I was still in college and it was one of the best times I've ever had at a stand-up comedy show. 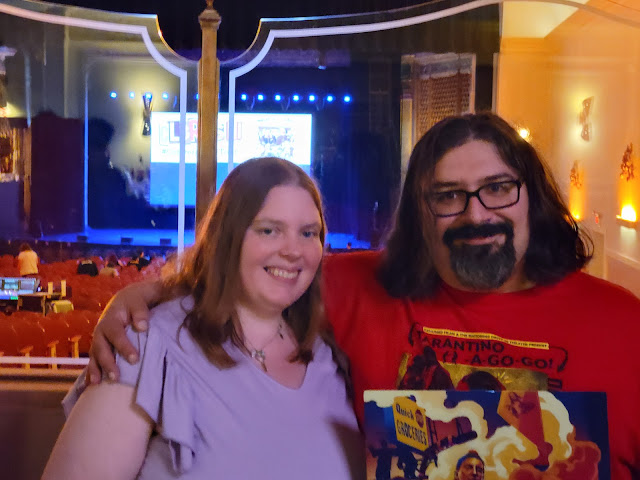 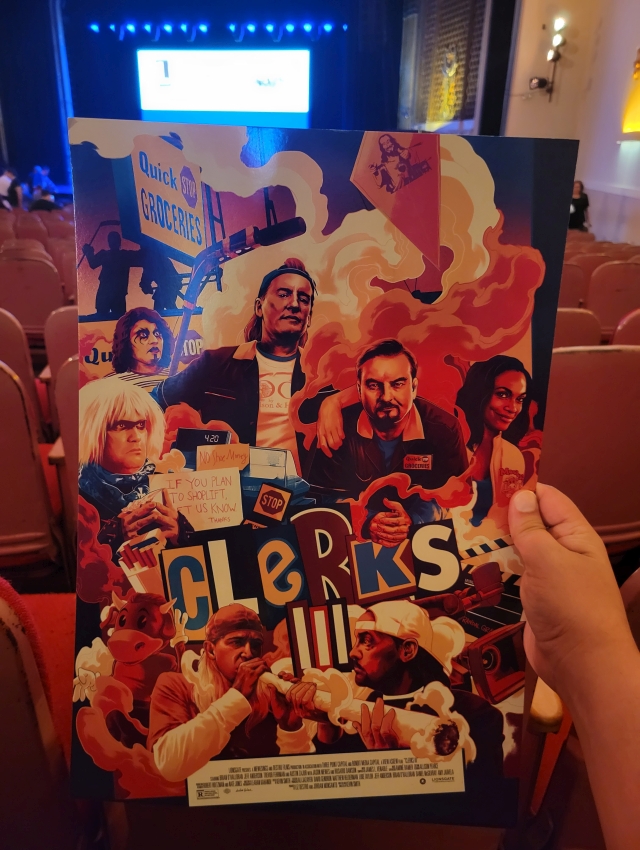 There was a merch table set up in the lobby of the theater, so we picked up a poster for the show.  It's difficult to see it in this picture, but it has sort of a chromium gloss to it.  We spend a good amount of time in the minutes before the film began trying to decode what we were seeing in the poster and how it would be worked into the film.  For example, is that Pris from Blade Runner at the left center, and what is Buddy Christ doing on a kite?  Sorry... no spoilers here, although you will understand the title of this post after you see the movie, and you'll probably understand why the line made an audience in a suburb of Philly erupt in cheers. 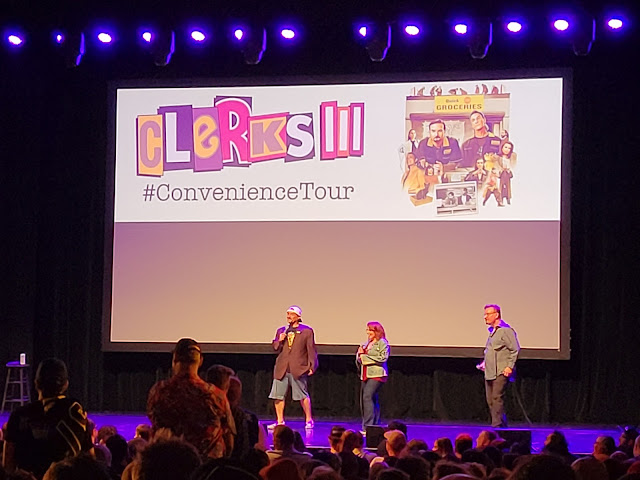 I'm barely competent at reviewing a movie that has been released to the general public, let alone to find a way to talk about one that is still five days away from it's nationwide release date, so I will just say that we both enjoyed the movie and leave it at that.  If you've seen the trailer, you know what it's about and you know that there are a lot of familiar faces from the past who pop up throughout its runtime.  I'm not sure what someone would think of this movie if it was their first exposure to Kevin Smith, but if you're a fan of his work, this is a must-see.
Speaking of Kevin, he hit the stage after the credits rolled, and he wasn't alone.  Brian O'Halloran (Dante) and Marilyn Ghigliotti (Veronica) were there as well.  We actually bumped into them when we were standing in line waiting to come in the theater.  Brian was talking with fans and before he went back inside, he shouted "enjoy the movie, fuckers!" which got everyone laughing.
The Q&A was a lot of fun.  Kevin spent a lot of time talking about George Carlin after one of the fans in attendance asked about him.  Mr. Carlin is the closest thing to a hero to me that this world has ever produced, and the only person I have ever come across who seemed to see the world the way that I do.  I could have literally sat there all day and listened to one of my favorite directors tell stories about my favorite comedian.  It was wonderful!
Kevin, Brian and Marilyn weren't the only familiar faces that we saw at the Keswick Theater last night...
The second question of the night came from Virgil Cardamone of the Mahoning Drive-In Theater.  I thought I heard his laugh earlier in the night.  If you've ever been to the drive-in, you know what I'm talking about... this dude has a very distinctive laugh that carries, so you know when he's nearby even before you see him.
I wasn't going to share what the two talked about, just in case they didn't want to announce anything to the public until it was a done deal, but since GeekBoyPress took a video that was shared on the official Mahoning Drive-In Theater Instagram, the cat is out of the bag.  They're planning Kevin Smith Fest V for the first weekend of August 2023 to coincide with Kevin Smith's 53rd birthday, and the man himself will be on the lot to celebrate with us.  I didn't think anything could top the experience of seeing Clerks III and hearing from the director in person immediately after the film, but this did it.  Next summer is going to be incredible!