How You Turn My World You Precious Thing 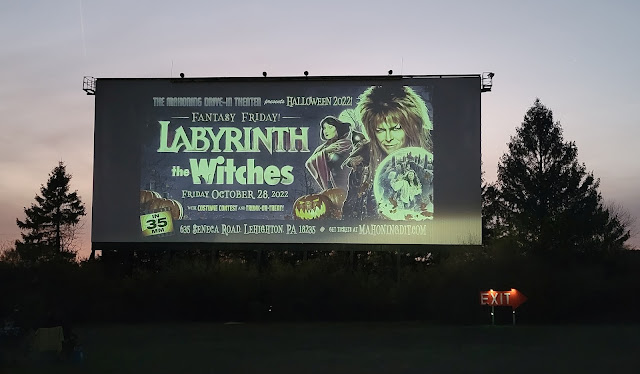 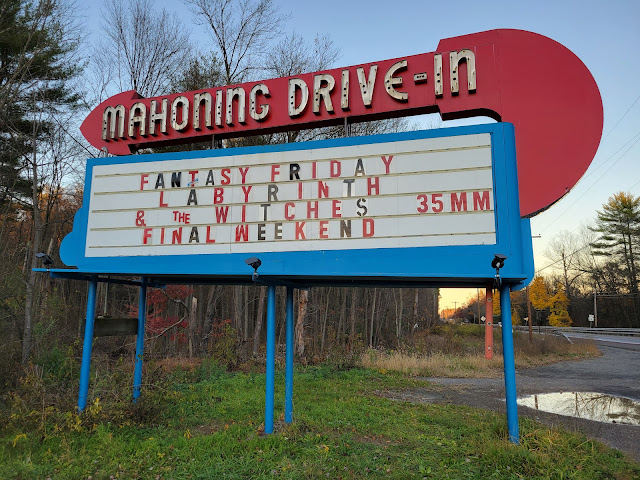 When tickets went on sale for this show in September, I was hopeful that the Phillies would make it into the playoffs, but I didn't think they'd to make it to the World Series.  I'm glad that I bought tickets, but had I known that this double feature would coincide with the first game of just the eighth World Series that the Phillies have reached in the team's 138 year history, I'm not sure that I would have made the same choice.  However it all worked out.  I got to watch the game on my phone during intermission and after the second movie, which ended about five minutes before JT Realmuto hit the go-ahead home run that gave the Phillies the win.
One of the challenges of having conflicting passions is that both fan groups that I associate with are on completely different ends of the spectrum.  The folks that I met up with at Joe Bob's Jamboree last year scoffed at the fact that I would be with them at the Mahoning on Thursday, Saturday and Sunday, but I'd be skipping out on Friday because I already had tickets to a Phillies double header before the Jamboree was announced.  Some of them almost seemed insulted that I would even consider going to a ballgame instead of spending all four days at the drive-in.  Even now, if I'm wearing a Phillies shirt at the drive-in, I can expect at least one person to make a sarcastic comment about "sports ball".  And before you think that I'm talking smack about cinephiles, I get an equal and opposite reaction from my dad and from other Phillies fans when it comes to spending a weekend watching old movies on 35mm instead of cheering on the Fightins.  Imagine standing at Citizens Bank Park and telling people that you couldn't make it to a playoff game because you already had tickets for the drive-in to see two old movies that you could watch on DVD any time you wanted to.  Neither side seems to be able to appreciate the passion for something that they're not into.  As for me, I have loved movies and Phillies baseball in equal measure for as long as I can remember, and if that creates a few scheduling conflicts in my life from time to time, so be it. 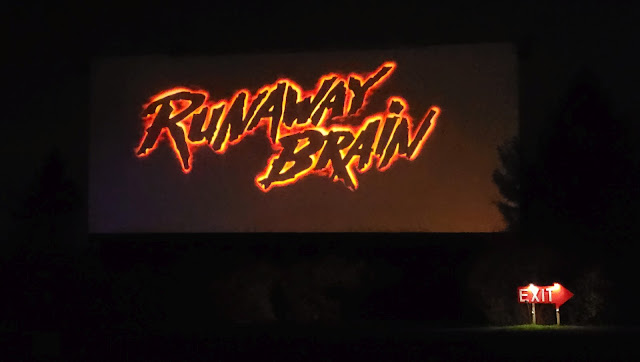 In addition to the movies, there was a lot of fun happening on the lot last night.  There was a costume contest, a trunk-or-treat for the kids, and a car decorating contest.  There were also a few surprises on the big screen, including a pre-show cartoon screened from an original 35mm print.  It was a Mickey Mouse cartoon called Runaway Brain.  This was originally screened in the mid 90's before A King In King Arthur's Court, but it's definitely appropriate for the spooky season.  We saw it at the Mahoning last season at the Keith Coogan double feature, and I was happy to have the chance to see it again. 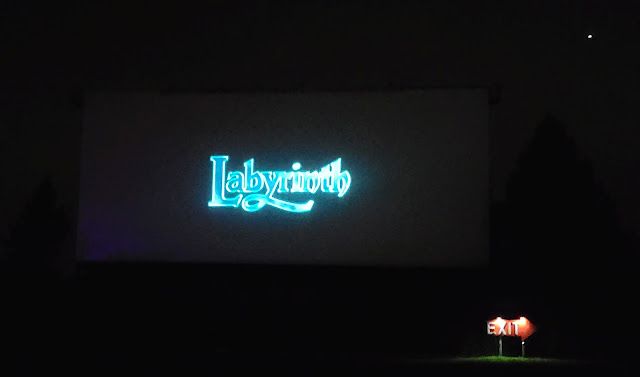 Labyrinth premiered in theaters four days before my sixth birthday.  I didn't know about it at the time, and it wasn't one of the movies that my family brought me out to the theater to see, however it became one of my favorites after it came out on home video.  David Bowie's voice in this movie has echoed in my mind since childhood, and I'm immediately brought back to my childhood every time I hear Underground or Magic Dance, or any of the other incredible songs from this film.  Once again, the Mahoning is like a time machine that has given me the opportunity to see movies that I didn't get to experience in theaters, and I got to see it as it was originally shown - from a 35mm print projected on the big screen. 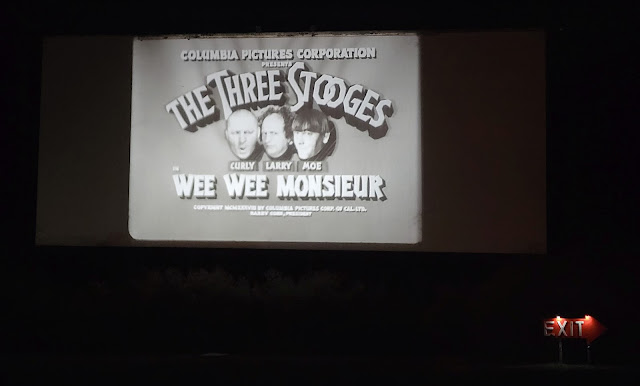 Instead of showing one of their intermission reels, they screened a 35mm print of the 1938 Three Stooges short called Wee Wee Monsieur.  It featured the original stooges: Larry, Curly and Moe, and it was the 29th short to be released by the comedy team.  I'm not sure if it would be feasible, but if they ever decided to do The Three Stooges as a theme on Sunday with a marathon of original shorts from the 30's and 40's, I would be the first in line.  There are few comedies that stand the test of time in the way that they do. 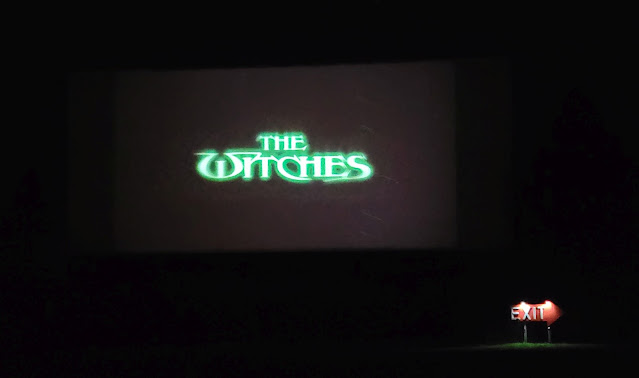 The second half of the Fantasy Friday double feature was the 1990 Jim Henson Company classic, The Witches.  Regardless of the decade that they were made, scary movies that are meant for children are usually pretty watered down.  They might have a couple of nightmare-inspiring characters, but they're often delivered with a wink and a laugh.  Hocus Pocus is a good example of this.  It's a great movie, but I wasn't afraid of the Sanderson sisters, and no kids that I grew up with who saw the film back in the 90's were either.  The same can be said for spooky kids television shows, such as Are You Afraid Of The Dark, Goosebumps and Eerie Indiana.  They're all fun and I highly recommend them, but although there might be a mild scare here or there, there's no real terror here - unless you were one of those kids who wet your pants every time you heard a creek in the attic.
The Witches is the exception.  This isn't a kids movie that's dipping its toe in the spooky pool.  This is a horror movie that's shaved just enough off of the edges so that they could show it to children.  Anjelica Huston isn't a campy showgirl wearing a witches Halloween costume while she smiles and cackles for the camera.  She is an absolutely terrifying villain, and she and the other witches in the film are scary because they're presented in a way that you could believe that they actually exist, especially if you're a kid.  Their ability to blend in with their surroundings and victimize children was something that came to mind years later when I first encountered The True Knot in Stephen King's 2013 novel, Doctor Sleep.
This is another movie that I didn't get the chance to see when it was released in theaters, but I did see it with an audience quite a bit when I was a kid.  I went to Christa McAuliffe Middle School in Boynton Beach from sixth through eighth grade.  We often had movie days on the last day of school, or for the last day before an extended holiday, like Christmas break or Spring Break.  We would still go to our classes just like any other school day, but each classroom had one of those wheel carts with a television and a VCR, and each teacher had the same stack of tapes that they would play for us.  It was pretty well coordinated, because the teacher in your first class would stop the tape before the bell rang, and then we'd all go to our next class where our second period teacher would hit play on the same movie that he or she started in their first period.  Sometimes you'd miss a minute or two, and sometimes you'd have a little overlap where you'd watch a few minutes that you just saw, but it all worked out well.  When I look back in it with adult eyes, I have no idea why they didn't just let us stay in our homeroom for the whole day, but I'm sure they had their reasons.  One of the movies that they had the license to show to us in school was The Witches, so I've forever linked it in my mind with the feeling of sitting in middle school and counting down the minutes before I'd get a break from school. 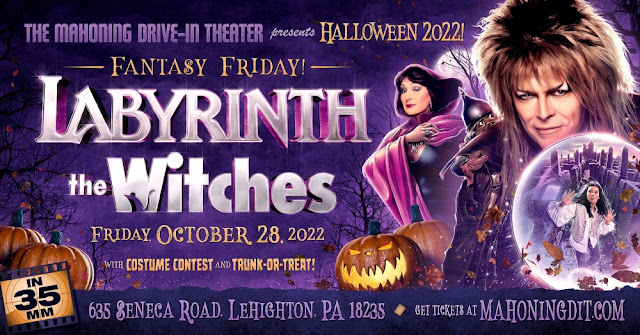 We've only got two more nights at the Mahoning before the drive-in goes into hibernation for the winter, and we're going to make the most of them.