They Abide And They Endure 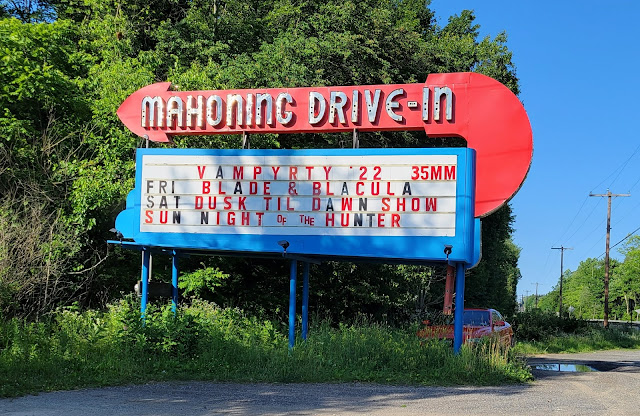 The Night Of The Hunter
Mahoning Drive-In Theater - Lehighton, PA
Most of the time when we go to the Mahoning Drive-In Theater, we're going to see a movie that we know and love.  It's often the first time that either of us are seeing it on the big screen, but we're familiar with it because we've watched it before on home video or on television when we were growing up.  On a few occasions, we've gotten to see a movie here for the first time, but that's usually because it's part of a double or triple feature that's being shown along with something that we know and love.  Those are some of my most treasured memories at the drive-in because I'm experiencing the film for the first time in the way that moviegoers saw it during its initial run.

The Night Of The Hunter premiered on July 26th, 1955 and was screened at the Classic Theater in Lehighton, Pennsylvania later that year.  As near as I can tell, last night marked the first time in over 60 years that this film is being shown at a theater anywhere in Northeast PA. 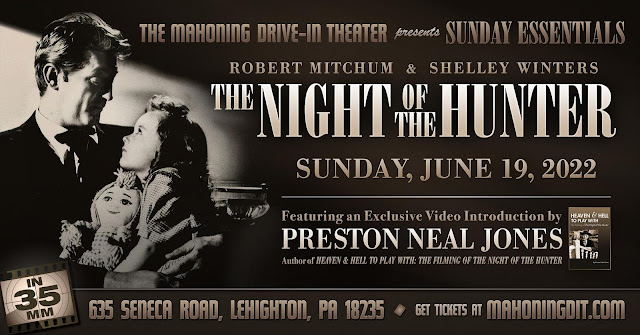 Not only had I never seen The Night Of The Hunters before, but I never even heard of it.  I wasn't even sure what it was about.  In fact, the only things I knew about this movie at all when we bought the tickets was that it's a black and white suspense film from the mid 50's, and that it has been called it one of the greatest movies of all time.  So, with this in mind, I bought the tickets and then forced myself to not look up anything about the movie or its plot.  How many chances in life do you get to go into a 67 year old film completely cold, with no expectations of what it's even going to be about, and to get to experience it for the first time at a drive-in theater? 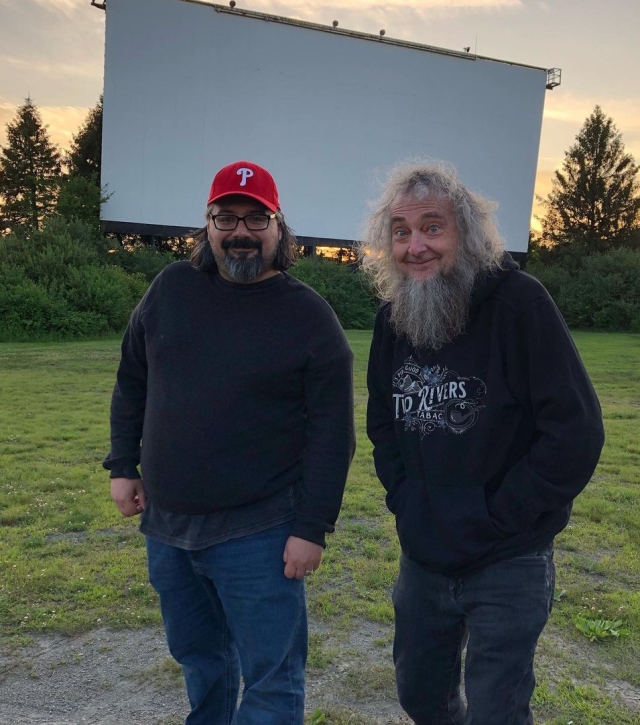 I wasn't the only one who was excited for the opportunity to see The Night Of The Hunter at the drive-in.  The lot was pretty packed with folks, and among them was one of the funniest stand-up comedians I have ever seen, Raymond The Amish Comic.
Before the show, my wife and I were relaxing in our camping chairs enjoying the music and talking to our neighbors in the car next to us.  We got to talking about some of the other shows we had been to earlier that year, and I pulled out my phone to show the photo op that was set up for C.H.U.D. at Zombiefest a few weeks ago.  When I opened Instagram to get to the photo, I noticed a picture that was just posted a few moments ago by Raymond, who was having his own Night Of The Hunter during the pre-show by hunting for Pokemon in front of the Mahoning screen.  I went over to say hi and to let him know that my family and I go to his pre-Thanksgiving show in West Hazleton every year (well, in 2019 and 2021 - the pandemic put the kibosh to just about everything in 2020).  I didn't want to bug him because he wasn't there to perform or to do a meet-and-greet; so my intention was to literally stop for just a second and say hi and that we're big fans, but he was very awesome and took a few minutes to talk with me.  He also took a selfie with me on his phone to post on his Instagram page.  Seriously, if this man is performing anywhere in your area and you want to laugh your ass off, go see his show! 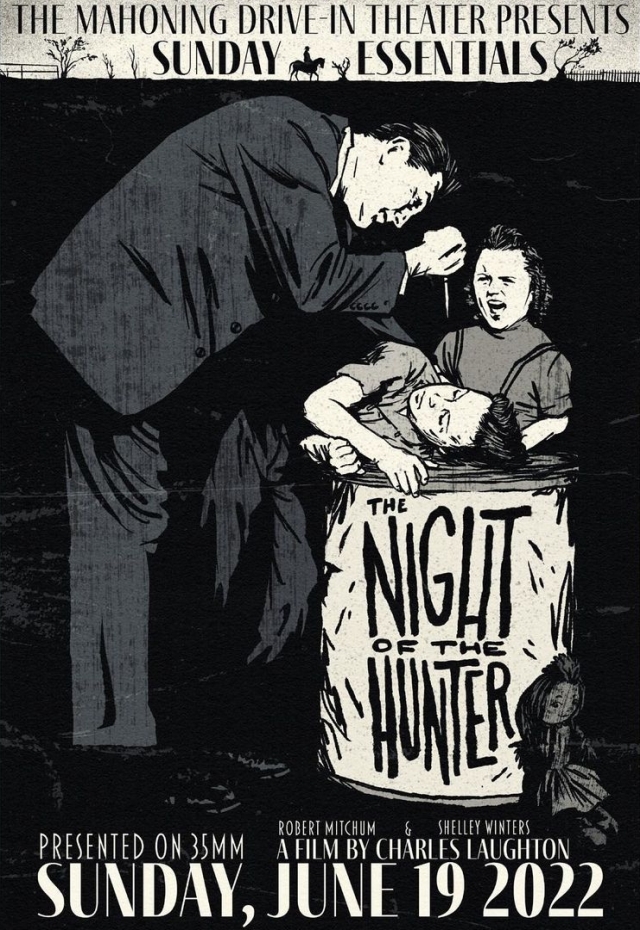 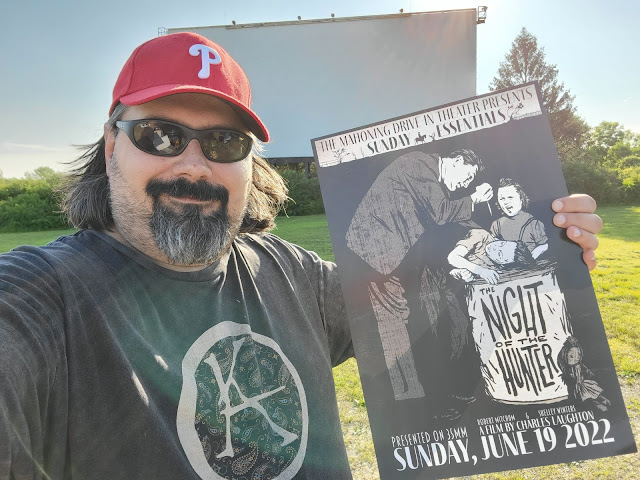 The poster for this show was designed by Tom Bifulco.  He's the same artist who created the poster for Enter The Dragon, the Sing-Along Weekend and the Remake Double-Take for The Fly, and that's just for the shows that we've been to this year so far.  He's done dozens of others in previous years for the Mahoning.  Check out his work on Instagram. 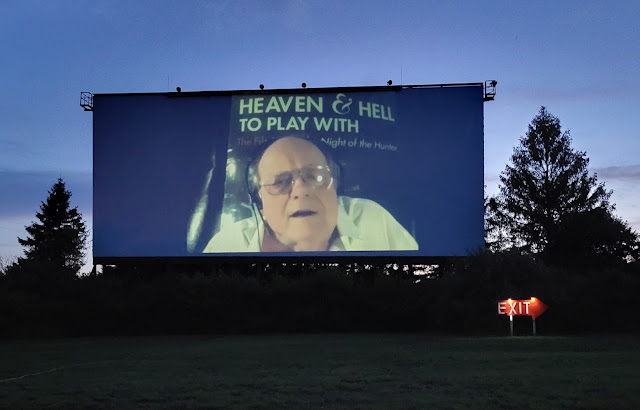 Before the start of the movie, there was a brief video introduction given by Preston Neal Jones, author of the book Heaven & Hell To Play With: The Filming Of Night Of The Hunter.  To be honest, I was pretty guarded about how much attention I was paying to this.  You never know what the folks who introduce a film are going to say, and I had gone out of my way to come into this experience with as little advanced knowledge of the plot as possible.  The last thing I wanted was for a major part of the movie to be spoiled just minutes before I finally got to see it on the big screen.  However, I'm happy to say that nothing about the story was spoiled.  Most of what he spoke about was how Charles Laughton came to direct this movie, as well as some of the casting choices and the unusual ways that Mr. Laughton went about making the one and only film he ever directed. 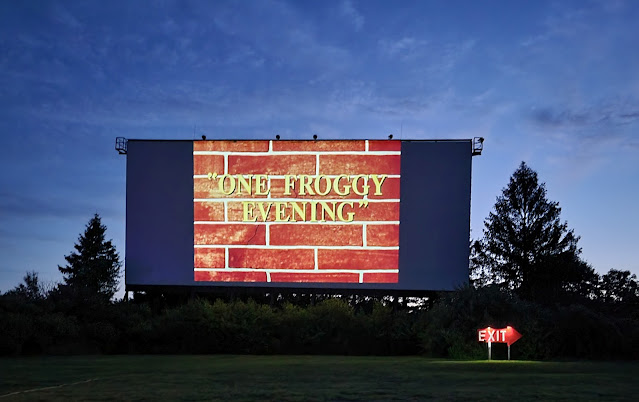 After the introduction, but before the trailers, they showed a 35mm print of one of the greatest Loony Tunes of all time, the 1955 Chuck Jones short: One Froggy Evening.  Even if you've never seen it before, I guarantee that you know something about it.  This cartoon was the debut of Michigan J. Frog, the little green frog who was the mascot for The WB.  He has a top hat and cane and he sings "hello my baby, hello my honey, hello my ragtime gal" (among other things) while dancing around.
If you like cartoons and you've never seen this one, I implore you to go on YouTube and check it out as soon as possible.  It was ranked at #5 in The 50 Greatest Cartoons list, and it is absolutely hysterical! 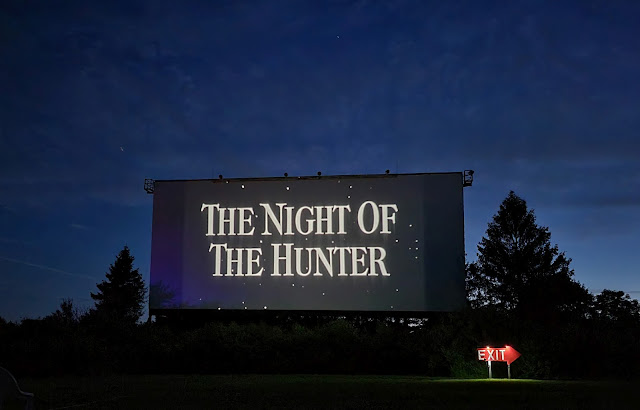 After the trailers, we watched The Night Of The Hunter, shown from a 35mm print that was restored by the UCLA Film and Television Archive.  The print was absolutely gorgeous, and the movie itself is jaw dropping.  Earlier in the night, I spoke with Virgil at the snack bar and he said that he wouldn't hesitate to call this one of the top five movies of all time.  After seeing it, I can say that I completely agree with that assessment.  This is unlike anything I have ever seen before.  It is decades ahead of its time and presents its characters with a depth that no movie I have ever watched has surpassed.
The story takes place in West Virginia during The Great Depression and it stars Robert Mitchum as one of the greatest movie villains of all-time, Reverend Harry Powell.  I don't want to say too much about the plot just in case anyone reading this is like me and has never heard of this movie before.  If this is you, please trust me when I say that if you love movies, you really, really, really need to see this film.  It's available to stream for free on Tubi and PlutoTV, and it's available to rent or purchase on Amazon Prime. 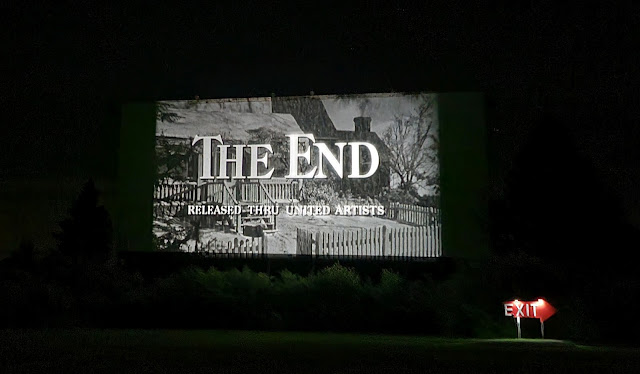 The list of incredible experiences we've had at the Mahoning Drive-In Theater has gotten ridiculously long, and the season is still young.  There's so many incredible movies already on the calendar, with many more of their annual events to go which haven't even been announced yet.